I wanted to start a thread about semi-modular hardware devices. Synthesizers, but also the devices that accompany and complement them.

Some are well-known, like the Korg SQ-1 and the Make Noise 0-CTRL. Some fly under the radar and I barely notice that they exist, sometimes I discover them years after they’re released. The Hungry Robot CV devices, for instance, were basically out of production by the time I discovered them.

Because of the popularity of modular synthesis, there is an otherness to these machines. They have CV patchability, but they are stand-alone. When they are used with a eurorack system (or even with each other), there is a “placenta”-like aspect to the setups.

I think that Moog was on to something when they began naming their machines with the “mother” theme.

Below is a picture of three of mine, arranged in a clarinet case I copped at a thrift store. If anyone has found joy in particular machines, or combinations of machines, I hope you will post about it here 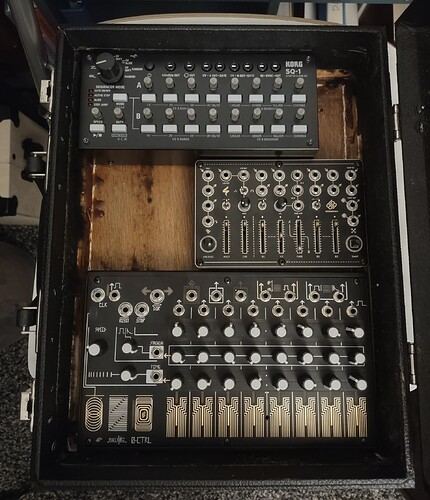 I think it’s kind of silly to think of it as a eurorack tool only, but Pulsar-23 I think is pretty appropriate given its built-in eurorack interface.

I am absolutely in love with my Expressive E Touché.

The device offers a type of tactile and expressive control that I’ve never encountered with any other controller, and the fact that the CV control is built into the Touché just makes it feel even more like an integral part of the overall instrument.

EDIT: I’ll also add the 16n Faderbank here, both as an i2c controller and as a CV controller.

Going the DIY route, I’ve gotten so much out of the little friends from this Synth DIY Guy video on making your own 0 hp utilities with heat shrink: 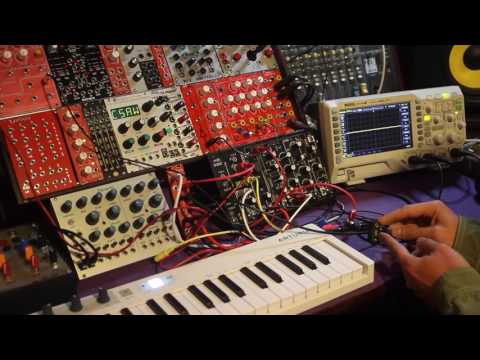 these are pretty cool - not just for eurorack

Our Chernobylizer and Fort Processor synths are somewhat designed with this sort of thing in mind. the former has an optional DC-coupled output so it can kind of act as a random gate kind of thing when starved to the lowest frequencies

i think pocket clock-it went under many people’s radar, and is definitely worth checking out in this category. very neat little clock sequencer/divider that pairs well with basically anything. 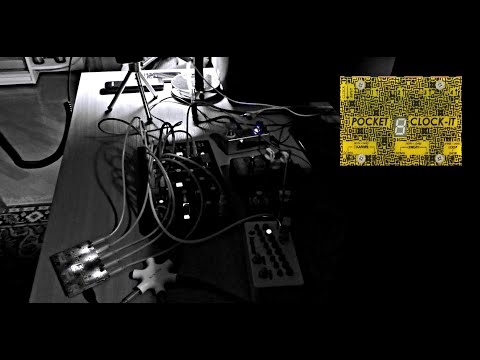 I think it’s kind of silly to think of it as a eurorack tool only, but Pulsar-23 I think is pretty appropriate given its built-in eurorack interface.

Most semi-modular devices are smaller. The Pulsar-23 is actually comparable in size to many racks. So perhaps that similarity, and its other highly experimental gifts, causes me to think of it as a machine that is on equal footing with Eurorack. Albeit, coming from a different approach.

SOMA machines are “other” on a whole other level, now that I think about it. Machines by many of the familiar manufacturers have a way of fitting in with modular in a very accommodating way. SOMA is so very much it’s own thing. Vlad’s instruments can play well with others, but they also exert themselves in an alien way that is almost wholly unconcerned with the presence of other instruments.

Landscape’s instruments are striking to me in a similar way, but are oriented in a manner that is more inviting to (and dependent upon) interconnectivity.

More than the Pulsar-23, I think the Ornament 8 could be included as a 0HP/Eurorack friendly device since it has format conversion and sequencing. Also a little smaller.

I love boxes like this (especially SQ-1) and am happy to see a thread.

I think the Kilpatrick Phenol was generally under appreciated. Possibly the the only bananafied semi-modular? We’ll-thought-out, densely featured, weird envelopes, sturdy build… Patchable Analog Synthesizer The patchable modular synth experience is now available in a compact, affordable package. With the excitement of a full-sized modular synthesizer packed into a fun table-top unit, PHENOL includes tons of amazing...

Possibly the the only bananafied semi-modular?

Phenol is fully modular. There are other banana semi-modular synths though, like Double Knot, most CL instruments…etc. But of course, Phenol is a great self-contained synth.

My first step into Eurorack was the Pittsburgh Lifeforms SV-1b. It’s such great value - a midi interface, two oscillators, a mixer, a filter, an ADSR envelope, sub-octave generators, VCA, noise, S&H, several LFOs, two mults, and output. All yer basic subtractive synth needs in a cute little box, which can live either in or out of the rack (if you get the blackbox enclosure). It taught me so much about how synthesizers work, and even though it doesn’t make it into too many of my patches any more, it’s such a lovely little box of tricks.

Stuck my toe in the water so many times with semi-modulars before finally succumbing to Make Noise and getting a skiff, and then the CV Bus case. Some of my favorites:

Sometimes I think I should sell off all the semi modulars and focus on making my main system more robust with modules. But the main reason I started with the semi mods is that I spend most of my day out and about, and I like to nerd out in public where it doesn’t feel like I’m missing out on life. Then I can take those devices back to the Fortress of Solitude and expand on what I did during the day. My current CV Bus Case has an empty “guest spot” in the corner where I made a little blank panel shelf, so I can perch one of the semi-modulars up there without having to take it apart and rack it. 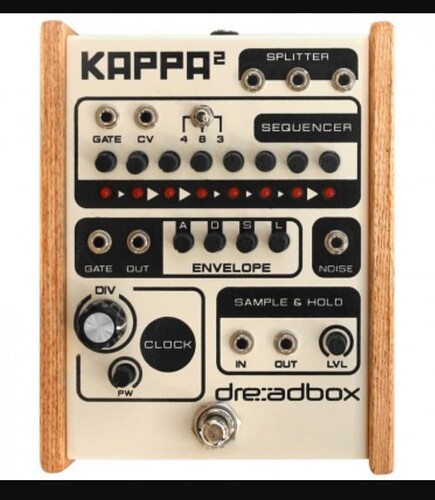 One of the first 0HP devices that I discovered (when I first started getting into semi-modular gear) was the Kappa 2 by Dreadbox.

This pedal is more of a gathering of useful utilities then it is a “pedal”, having an envelope, basic sequencer, noise, S/H, and a tiny mult. But having never seen a gathering of utilities like this, I was thrilled when one popped up on eBay.

I had it for about a year, and it was simultaneously very limited and very flexible. When I had outgrown it, I wanted it to have a reset for the sequencer. But I still got interesting things out of that sequencer, especially when synced with the sequencer on the Koma Field Kit.

The pulse width knob, in tandem with the clock divider knob, caused the sequencer to do wild things the higher it was turned. They were also interesting things to do with the sample and hold in/out that I am sure most people used to modular would find old hat, but for me was a joy to discover.

The other pedals in this dreadbox line are also very interesting, and I have tried out a few of them. But I will always have a soft spot for the Kappa 2 because it was one of my first experiences with CV where it wasn’t just part of a mono synth.