The beauty of modulating pitch?

Inspired by the recent Namelessness thread I thought it’d be nice to discuss something less gear-specific, and instead see what we can share about a cornerstone of music - such as pitch. Or the lack of it?

There is something about pitch modulation that seems to grab and affect us. And it seems we have invented lots of ways to play with it: Bends, glissandos, vibrato, glide/portamento, chorus, wow&flutter. Boards of Canada’s old Grundig reel to reel, Chris Isaak’s Wicked game - well, anything featuring pedal steel or blues. The examples seem too many to mention.

At times we find this desirable and beautiful and at other times it’s just sour, out of tune. I suppose tension/release has something to do with it. I find this very interesting, I don’t know very much about it, but I’d be interested to hear about anything related to it - explanations, examples, techniques.

What’s your favorite example of pitch modulation - and why?

The details of pedal steel guitar pitch modulation are great to absorb even if you are simulating the effect using a digital controller.

Some common techniques that steel guitarists use are listed and explained.

This is hilariously dumb, but I have a Merlin Seagull, which I guess is a strum stick (basically an Appalachian dulcimer designed to be held like a guitar), and it has diatonic scales, but there’s exactly one fret real high on the middle string that is def in the wrong key with how I have it tuned, and my goodness, I love bending that string a half step up. Put some emphasis on that vibrato, and you have the one-trick pony I’ve used in practically every song I’ve written with that instrument…

Hmm maybe I should try something else.

Aha! I happen to have one too. Just checked… nice

(Damn, this headed straight into gear).

There are others here more knowledgeable on this (@makamqore for one), but the vocal ornamentation in Arabic music is quite amazing.

the vocal ornamentation in Arabic music is quite amazing.

I cannot agree with this more. The way the muezzin bends notes in their call, for example, is beyond stunning.

(Also, if anyone knows of any albums of really good Arabic choral music, please let me know, I’d love to listen to it!)

From 1990-1995 I mainly played saxophones through effects and guitar amplifiers. Pitch modulation with the sax is done through the ambrouchure and breath – there is so, so much precision and nuance possible as to be remarkable. I remember the day, the very day, that I first played my sax through a delay pedal into a fender amplifier and felt the gobsmacking beauty that was there to be made and felt by subtly changing the pitch of a sustained note. The delay coming in vs the original signal with the differences in pitch, all percisely controlled by my body. It was the beginning of a long, long relationship with this. This effect is the basis for chorus and many other effects, but maving that bodily control of the movement of pitch is… there are no words!

At the same time I began my relationship with the guitars on My Bloody Valentine’s Loveless album. I could feel something there that was in the same category as what I had found. I bought a Jazzmaster guitar with it’s transtrem tremolo arm and found the same kind of nuance of pitch modulation and found that this, through a delay, and then into an overdriven amp made an even more amazing blossoming: the pitch variations hit the distortion in such a way as to make a completely new sound, neither guitar, nor the delay, nor the amp-- an aggregate. Like the sax, it is an incredibly evocative sound, emotional, visceral. When I saw MBV play in 1991 I could feel the pitch modulations in my body at the small venue.

I later found the effect that MBV used to be not at delay, but a reversed gated reverb (sort of) that was in the Yamaha SPX 90. I got one and sampled the impulses and found it to amplify the effect to a great degree – it would create dozens of slignty detuned reflections of the direct sound. I’ve reverse engineered the algorithm and now find that I am able top produce a wide variety of this shifted and emotional effect on nearly any source of sound. So my point is that the pitch modulation is gorgeous, but can be the seed of something even more beautiful when put into a process where it is interacting with itself over the time domain. 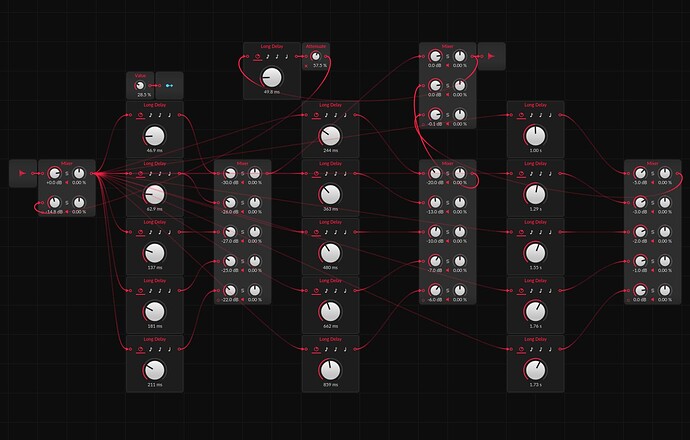 one thing I’ve learned with the guitar is using the vibrato / Bigsby / tremolo arm to dip the pitch so its flat rather than lifting it sharp. Even with little vibratos or flutters, I generally lean downward as its drifting or wiggling - so the notes return to the correct pitch, rather than rising too far above it.

So when using pitch modulation in other areas like on a synth or sample, I tend to shape my modulations so they don’t go too high, negative voltage (or using attenuverters) make this super easy. It feels more natural to me somehow, like something’s being stretched and bent – it plays better with other instruments and sounds in a mix imo

I’m digging the Vongon Ultrasheer of late. It’s blend of reverb and random pitch modulation is very pleasant to the ear.

I do think it needs to be used tastefully/moderately in my opinion but a lovely tool to say the least. I also like playing around with the pitch wheel on my cassette machine on the fly as I’m recording to a sampler or the like to create subtle nuances

I’ll shamefully plug my own music here but, my favorite “creative use” of pitch is this track 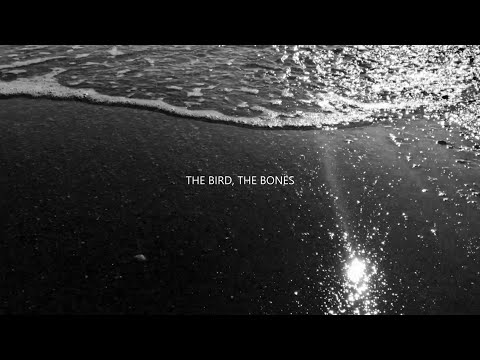 Piano/Strings aside, it’s almost entirely a jam with my acoustic guitar into MLR on norns, where I’ve created tons of micropitch and octave variations based on the various chords of the track, it all came together in more or less an afternoon.

I remember the day, the very day, that I first played my sax through a delay pedal into a fender amplifier and felt the gobsmacking beauty that was there to be made and felt by subtly changing the pitch of a sustained note. The delay coming in vs the original signal with the differences in pitch, all percisely controlled by my body.

Hmm. This sounds interesting. I don’t play wind instruments, but I’d like to try it singing and whistling. Bigsby pitch bends (or rather drops) into delay is a classic sound. And in some Disquiet Junto-entry a few years ago I stumbled upon the haunting effect of synth pitchbends into delay:

I am in the throes of turning my process on it’s head and finding a new way to be creative with sound. I have learnt that I no longer (or never did) enjoy sequencing or arranging chords. I have been working on my modular and other instruments just by modulating pitch microtonally for expressiveness and seeing how far it can go. I am focusing on improv for now but I would love to create enough of interest for tracks. I don’t really have a choice now I have ditched sequencers - I kind of have to make it work. It is a struggle as I have not gotten where I want to be yet but this thread is timely for inspiration.

Are you using a keyboard if you’ve abandoned sequencers?

Great topic, it’s so easy to get stuck with discrete values for pitch when using music machines. In the modular context, the DPO’s Follow function made me realize that I was missing out. Intuitively leaning towards maximum control, I always multed the pitch signal to both VCOs before realizing how much more alive the sound becomes when applying the Follow function’s beautiful lag. In the realm of recording and processing, it was tape (echo). It’s incredible what even slight deviations in pitch can do to the sound. Good reminder to insert more slew into my patches and apply modulation in the DAW.

At this stage that’s not the plan. Just using things to bend pitches and tuning sound source to intervals and striking the sound sources like an arp rather than a chord. It’s a work in progress but it helps with the paralysis I get from committing to sequences. Pitch modulation helps with the variation and expressiveness though.

I like unquantized sequencers, tuned (or microtuned) by ear. Sometimes I’ll have multiple steps play almost the same pitch and just move it a tiny bit.

Sometimes “phase bending” with a controller can work really well, modulating the delay time of a short delay, so you can make it really subtle or bend pitch a bit according to both the rate and distance of motion. That was one of my favorite things to do with sideways motion on the Expressive-E Touche when I had one.

I’ve got a rene1 which I enjoy using in unquantized mode, played usually by hand rather than by triggers.

Oh yeah this too. I’m using a stepped voltage modulation and attenuating it for pitch. Interesting relationships between pitch and various modulations (nothing new I know)

This effect is the basis for chorus and many other effects, but having that bodily control of the movement of pitch is… there are no words!

Agreed, the expressiveness of many modern MPE controllers (Roli, Linnstrument, Continuum etc.) is way beyond what is afforded by any preprogrammed LFO or EG.

I later found the effect that MBV used to be not at delay, but a reversed gated reverb (sort of) that was in the Yamaha SPX 90. I got one and sampled the impulses and found it to amplify the effect to a great degree – it would create dozens of slightly detuned reflections of the direct sound. I’ve reverse engineered the algorithm […]

This is very interesting, both the process and the result.

The question asks itself: you reverse-engineered the algorithm how, exactly?

And thanks for the detailed image, that should make it possible to exactly reproduce your result. That’s Bitwig’s Grid, right?

Well, the SPX90, made in the late 80s, had a very complete set of technical documentation that included not just an explaination of how the algorithm worked but also a couple charts that mapped out the specific timing and relative volume of the reflections for two specific settings of the effect. I built a bitwig rack made of the same number, timing and levels of reflections and tried it out. It sounded very, very close. Then I modified it so that I could made the timing of the reflections longer and did a few things that would allow me to run several at once so that I could increase density. The results are beyond my expectation.

I think the version in the Bitwig grid image is as close as I’m going to get to the original effect. I can play To Here Knows When and it is a dead ringer to my ear when I put a virtual JCM800 after it in the chain and apply compression. It actually sounds a good bit better, I think: 24 bit instead of 12, 96khz instead of 22.5k and no noise instead of a LOT of noise.

I play this with guitar and tremolo, but also with synths and my Touche working as a pitchbend or with a little custom Reaktor patch that I made that triggers a subtle pitchbend scoop of random depth and length on every x number of note events. It sounds very good with pads or strings, not just guitars.