The current state of grid sound

a new video, and some words on what’s going on. i’ve been exploring this musical setup for some time now-- the two main components being:

mlr has supported live input since the beginning, though due to the precedence of loop pedals it was quite easy to stop at a “grab new sound then loop/cut.” my first move away from this was transposing the sound up/down by octaves and reversing the speed. then playing micro-loops. then layering multiple channels of the same sound.

mlr had the continuous-looping-sample option, but i typically only used that when cutting an incoming signal. around 2009 ro released seemeebeemin (maybe we can him to post it up again), which contained a few tracks a priori and senescence – both use mlr in live loop mode combined with pattern recording and multi-channel transposition which create a sparkly organic form of auto-arpeggiation.

i’ve been exploring variations of the above since then. the aleph patch skitter is in this territory, though more granular. the foot pedal switch input moves the playhead, booming a transposed-down version of the exact present incoming sound. if you missed it last year, here’s the scene in use: https://vimeo.com/87119053

before this there has to be musical content. harmony and chord progression are interesting to me-- so naturally i end up simply playing a keyboard. i recently toured with @instantjuggler and used an op-1 exclusively as a small keyboard synth (fed into mlr)-- jay later showed me the million other things the keyboard did. and while amazing, i still simply only need a tone making device most of the time-- an electro-acoustic one (such as a wurlitzer or rhodes) is often preferable as nuances are emphasized in the resampling process (with the tradeoff being travel weight).

the modular has presented some interesting opportunities, and honestly did not fit my creative process at all until monome developed a slew of modules. i couldn’t rationalize building a synth just for the audio path, if i was going to control it (monophonically) from a midi keyboard or DAW. but now with the trilogy and teletype, i’ve been making (what i consider to be) interesting experiments with just two oscillators (mangroves) and one filter (three sisters), when paired with a heap of grid-control systems.

teletype allows the composition of harmonic progressions that can evolve slightly over time or radically with triggered input. this transforms the live-keyboard-playing into more of a listening act-- steering parameters, changing the direction of an algorithm, and tuning levels through resampling system. the resampling system can be played. meadowphysics can be played. playing any instrument requires much listening, especially in an ensemble. but here the ensemble is the machine. and playing a sometimes unpredictable machine becomes mostly about listening.

an aside-- i’ve become less self conscious about just throwing a single 909 bass drum onto a single row of mlr. sometimes even without tempo sync. because everything doesn’t always need to be in sync. i’ve considered a small device with just a tempo knob, that spits out a bass drum.

i’ve been trying to reduce technical complexity in performance. i’ve made insanely elaborate sets that desperately require i remember what technical things need to be changed as the show progresses-- the act of playing is secondary to just keeping the ship afloat. these days i’d much rather have two knobs and a foot switch, and a well-understood grid application.

i’d be curious to hear others’ perspectives on all of these matters.

It’s funny, the two Max for Live devices I’m currently developing and which will form the core of my performance tools are a step sequencer (tone generation) and a looper/sampler/shifter (for looping and mangling live input such as voice, guitar, and other sounds).

I really like your rationalization of the playing/listening dichotomy (or lack thereof), and it really resonates with other similar approaches I found emerging also when playing, for instance, a guitar through effect pedals. As you point out, one can play the effects as well as the instrument: sometimes the effects become instruments on their own accord.

Also about the complexity of sets, I completely agree: one should build muscle memory to enjoy performing with these tools. It’s way more fun and liberating than setting up parameters on a DAW, and it really feels like playing. I’ve been on stages a few years back, trying to remember parameter settings for multiple drum machine and synth channels changing for every song and I was way too stressed out to enjoy the gig. You shouldn’t have to think (too much) when playing, you know?

trying to remember parameter settings for multiple drum machine and synth channels changing for every song and I was way too stressed out to enjoy the gig.

i know this feeling so precisely.

andrew pask gives a great, deep exploration of this topic in an interview with darwin grosse. i’ve posted it before, but i really think it’s important:

I’m currently experiencing some kind of live looping stuff using @elquinto’s m4l mlr and 4 differents inputs (most of the time 4 instances of Aalto sequenced by parc). then i use meadowphysics to sequence the sample rows in slice mode. lots of fun

yes, those tracks were made with a korg ms-10 (monophonic synth) which is live sampled through mlr.

mlr was recording a pattern stepping between 3 octaves.

i think an important aspect to align the harmonies was to play the ms-10 melody at the same tempo as the recorded pattern. there was also some sort of mixer setup that created feedback. wow seems so long ago.

this thread fits in my process of rearranging my live-improvisation-setup. I am still struggling how much reduction I want while I am more and more interested in enhancing creativity and intuition through conscious reduction of possibilities. I use the monome with ES and WW on one 84-HP-Doepfer-case for tone-generation feeding that into Ableton. I am still a bit afraid to use the grid for both modular and looping but I think I will explore mlr. Another option would be Ableton-Tracks with Looper…
great thread at the right time 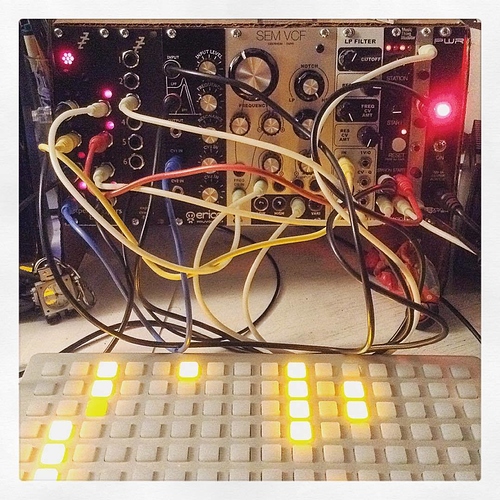 I’ve also been on a small laptop, eurorack, grid kick lately. Haven’t owned a laptop in a long time and it’s nice to come back to all the awesome Max apps.

i’ve become re-enamored by the simple, wonderful usefulness of hardware mixers. this sounds dumb, i know. but having a hardware mixer has a solidity beyond what a midi controller and complicated internal computer-routing setup can provide.

furthermore, it facilitates the specialization of devices. ie, for one part of a performance that requires a “backing track” of some texture/noise or highly repetitive slow chord progression (ie:

for me it’s psychically better to use a walkman with a cassette, fed into a mixer. compared to having quicktime open in the background while running mlr, or having a mapped channel on ableton. there’s something suddenly material and concrete. it’s an instrument, even though it is static. it’s “in the band” and the mixer has total, predictable control over it.

A small, portable mixer that is functionally useful for live electronics is actually sorely needed on the market. I’m half eyeing the K-Mix, but don’t really need it to be a usb interface as well.

after switching to hardware i started treating mixer as another instrument at some point, a performance tool, so lots of auxes, playing effects, feedback loops.

I have some thoughts on the compositional/playing ideas here, not fully formed yet, will come back with more. On the mixer front though @analogue01 is totally right, a small format mixer for electronics is sorely missing from the market.
In my (Aleph-led) shift back to hardware over the past year getting a small mixer has actually been the game changer, just being able to quickly or gently bring elements in/out massively impacts my realtime compositional structures.
In the end I plumped for a behringer 1002b, it doesn’t sound great and will probably fall apart soon, but it was the only small option with faders ( !!! one handed control of more than one level !!! ), plus lots of inputs and pre/post sends.
Yet still it’s bigger/heavier than I would like and the eqs aren’t really worth having. For bigger events I always get a larger mixer supplied by the venue, but I want to start touring a small solo show soon and would love something bijou and sturdy. (but with faders, otherwise i’d go for a small mackie mix)

This excites me greatly. I’ve yet to find a mixer that feels both inviting and immersive. Really hoping this comes to fruition.

An aside, may I enquire about your modular case? Custom made?

it was the only small option with faders ( !!! one handed control of more than one level !!! )

this is a great insight that i had not considered. i also appreciate the at-a-glance nature of faders vs. knobs.

i’ve also been more interested in mono lately-- but using dual-paths of audio as A/B rather then L/R. so cross-fading between content-- http://llllllll.co/t/mono-preferred

An aside, may I enquire about your modular case? Custom made?

it’s actually a pittsburgh cell 90, with sides made out of random old maple barn floor. i removed the stock power supply and put a row power 40.

This 60$ pawn shop teac has completely changed the way I go about constructing and composing songs. At first I thought the idea of 6 channel/4 mono bus mixer to be too little for all my hardware. But this is because I was thinking of stereo coupling all channels. Needless to say that was completely unnecessary. It’s quite nice cutting down to two voices of the 707, with a volca beats, plus one or two synths/live instruments. Also I didnt think there would be much practical proformance (or even studio mixing) use with simple high and low cut eq switches. But less it truly more, sure I can’t find any “sweet spots” but this knob-less idea is great for basic channel style kick cutting and what have you.

I think a monome mixer would kick ass. 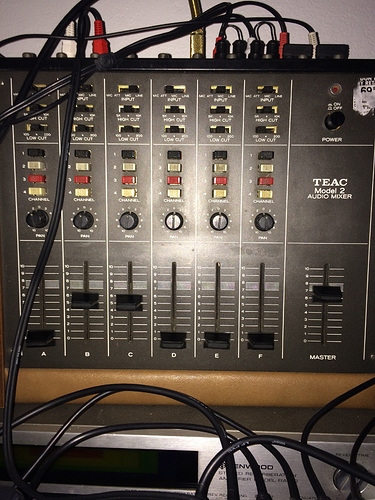 ro’s funk and geology’s smooth it out is so dope!

I know it’s not quite the same thing, but I always wish something like this was actually available: http://www.mapmap.ch/index.php/ongoing/landline/

i’d sell my right leg for a monome mixer, if it had the right features.

a few things get tantalisingly close - intellijel dubmix, k-mix, hinton gear, miiiix, some dj mixers - but no cigar yet.

6 channels, with high quality faders
l/r pan and mute on 6 channels, high quality pots and panel bolted knobs
basic metering on the 6 channels. a simple, single red, green yellow led will be fine here.
analog baby!
great audio quality, with lots of headroom for hot modular signals
no onboard fx : just 2 mono aux sends from each of the 6 channels, with stereo returns
stereo line output
vu meters / led bar on stereo outs
master volume control on a big fat knob
no usb, no midi, no s/pdif, not a computer in sight
as small as possible, but not too small!
metal case