I’m tip-toeing into the world of the distributed web.

I set up a mastodon instance to play around with it, and have started meeting nice people.

I am seeding my personal homepage (dat://hecanjog.com) with the dat protocol, and have had some fun trying out the beaker browser.

The beaker browser and dat especially are inspiring, and feel like possible future paths for real self-hosting beyond the current centralized platform world that’s normal now.

Reminds me of the playground-like situation of the early web.

Hosting a static HTML site with audio files on dat really feels exciting. I hope to at least mirror my netlabel on dat soon.

Go go distributed web! What else is there?

This is very interesting to me. Gonna come back and check it out later when I have more time.

For what it’s worth there is some related discussion around distributed web-esque technologies in an older thread: Building the world you want to live in.

I continue to see investment in things like Secure Scuttlebutt and ipfs. I ran a publicly accessible scuttlebutt node for a few months while I was exploring the system but in the end I found navigating the “gossip” content too confusing for my wee brain.

I’ve long wondered about the possibilities for decentralized collaboration platforms focused on creative endeavors and how flexible devices like norns could participate in that space.

IndieWeb is also a very interesting concept. One of the main idea is to own your content. For example, I have set a POSSE (Publish (on your) Own Site, Syndicate Elsewhere) publishing model.
I post my content on my website and then it’s automatically published on other platforms (Mastodon, Twitter, etc.). It means that if in the future, Twitter shut down for X reason, I do not lose all my contents/tweets.

I didn’t know about all of this, being a web developer myself I’m VERY EXCITED about this stuff! I’m checking it all out now, new worlds opening, thanks! Any links to interesting music projects on there that are up and running already?

I continue to see investment in things like Secure Scuttlebutt and ipfs .

Nice, thanks! IPFS felt really promising too but it felt like it could have really benefited from a beaker browser type project. (I guess beaker did support IPFS at first but they have since removed it for some reason.) The combination of beaker being an editor & host platform so you can make a new dat site right from the browser, and dat supporting stable URLs that can be mapped to normal DNS TXT records for human-readable URLs is pretty great too.

Any links to interesting music projects on there that are up and running already?

I haven’t come across a lot but p2p distribution seems like a great platform for netlabels.

I’m really curious about funkwhale which seems like a self-hosted spotify-type platform?

I’m really curious about funkwhale which seems like a self-hosted spotify-type platform?

Very interesting. I’m trying to set one up as we speak

On a more lower level, cjdns and Tahoe-LAFS might be worth a look.

I’ve been following and using Ethereum and IPFS for a good while, now. The most interesting project I’ve come across using both is a social blogging platform called Akasha, and I was pretty active on there for a time. I’ve also put some music up on Ujo and messed around a bit with ENS as well as resolving DNS to IPFS-hosted content.

This stuff is incredibly exciting, but it seems I’m forever waiting for the ecosystems to mature.

Yeah, being a pioneer can be a very lonely experience. I’m always keen but often distracted by boredom

Did funkwhale seem interesting / useful? I still haven’t gotten around to playing with it!

It certainly looks great, but I have quickly been pulled in a maelstrom of technical difficulties and my funkwhale server hasn’t been set up yet. It’s a bit different development environment I’m used to so I haven’t even been able to test it locally, but I’m still on it! I need to set up my router to accept outside connections and so forth. Really looking forward to it, especially because I think many of us here would probably been keen to populate a platform like this.

I’ve found a couple nice sound art / music oriented mastodon instances since getting back into it.

I love the neighborhood / island nature of mastodon’s distributed instances but it also makes it a bit of a challenge to explore the space.

So I don’t fully know what to make of it, yet, but this is fairly new:

A new world of social interaction, unifying the Ethereum ecosystem by integrating decentralized apps into a simple, delightful social experience.

I imagine it will make more sense with the next version of Akasha, which I eagerly await. In any case, I for one have long considered Ethereum and IPFS’s most promising use-cases to be as better means of publishing in any context, along with more meaningful interaction around published content (to include better and more transparent aggregation on all levels).

This just popped up in the IPFS newsletter: 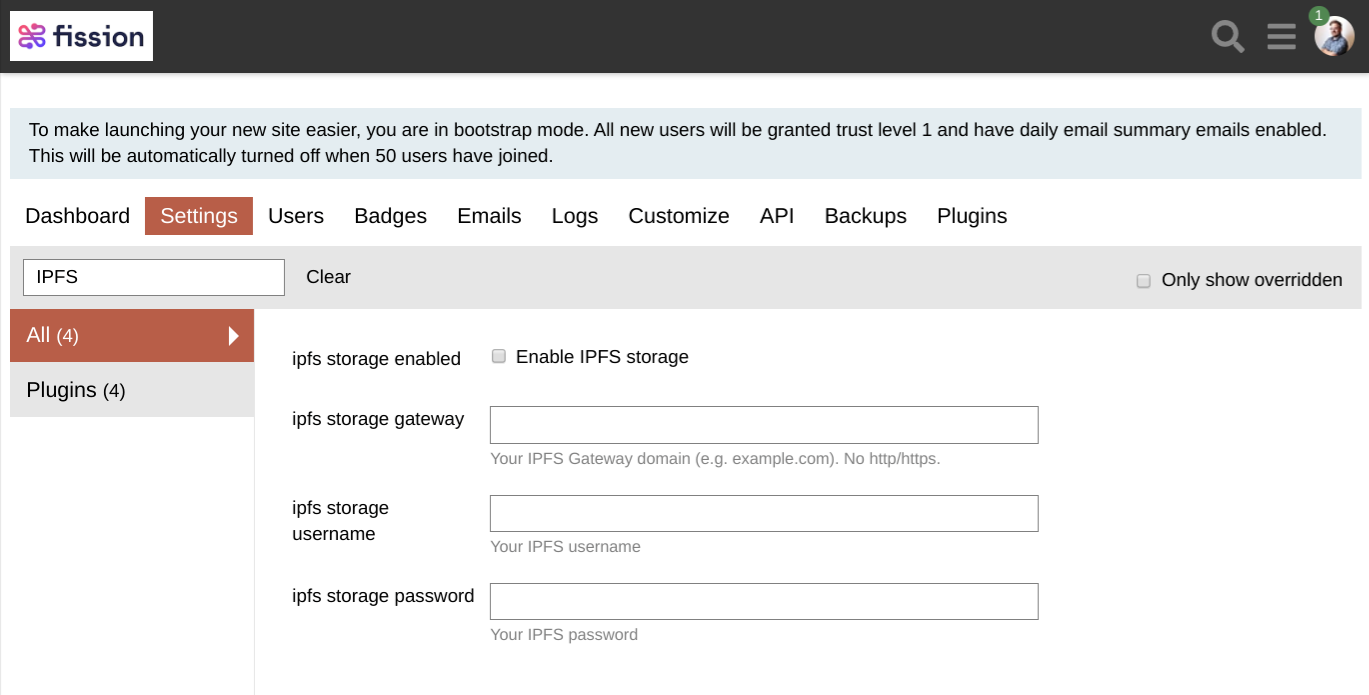 This file is now stored in IPFS via the Fission Web API, and is served up by an IPFS gateway of your choice. That image screenshot up there is being served up by ipfs.runfission.com, and of course can be loaded up from any IPFS gateway, like: ...

ephemerality and loss of history

It is indeed a pity that so much knowlege i getting lost, on the other hand I do welcome a certain degree of ephemerality with discussion groups. Most knowledge that is or was present there is not easily searchable, there’s a lot of noise mixed in with the signal and often the information can be incomplete, if you don’t take the time to dive into the context. Also, I don’t know if I like things staying online forever. Many things on the internet should have an expiration date.

So what would be needed – more than things being kept online as they are – is a constant and active archival work, where information is selected, compacted, organized and integrated and combined and put in a place where it is easily searchable and usable.
But that’s a lot of work.

Semi-randomly grabbing some bits from the convo over at https://llllllll.co/t/email-newsletters-low-tech-decentralized-web/34878/81so we can stop continue the discussion here.

I feel it is harder for people to have online personas that are separate to each other, as social media platforms encourage linking every aspect of your life. My awareness of this was heightened when I was recently applying for jobs, and realised how exposed my life could be through social media (not that they’d find anything particularly incriminating, but it was an uncomfortable thought nonetheless). Is this a misguided thought? How do people manage their anonymity online? Are blogs and websites better for this? Just a line of discussion I’m curious about.

Really any technology that feature you to yourself: “my feed, my words, my pictures, my videos, my music, my space, my rules” is usually both a lie and bad at actually connecting people (but also good at dopamine). (Which is not to say you cannot feel connection through that experience, but it’s not the dominant feature.)

Several years ago I made the decision to merge all my personas into one: Tyler Etters. My given name at birth. I was sick of being a different person at work, at college, with my band, online… It felt like switching costumes. There is a huge freedom in that but it was also something of a nightmare. One ego is enough for me, thankyouverymuch. So yeah I think it is misguided - depending on what you’re trying to do with your life. My goal is to be my authentic self in all contexts and places. I want to be proud of everything I post everywhere.

What transpires in truly virtual spaces lies always on the threshold of being and not-being. That’s why no technological framework can determine it, and why no algorithm can capture it much less commodify it. What is, is always in the process of being brought forth. And at the same time threatened with the possibility it may not be. Even the terminology is messy and uncertain.

All that said, I do have a certain point of agreement on the integrated persona in that I have settled upon a form of this where I’ve actually largely sunsetted most of my personal persona online in favor of my creative ones which, in turn, have also begun a process of integration into one another, both organic and intentional. Ultimately, I think the problem of identity at scale is not to be underestimated, which is why I lean toward self-sovereign identity as a promising paradigm.

We last left our heroes discussing vulnerability and identity. The saga continues…

So Ujo is a dead project, apparently, but Audius seems to be rising in its place. Apparently it’s already decentralized and recently began running on the Ethereum main-net and also relies upon IPFS for content hosting.

Audius Rallies EDM Artists, Crypto VCs to Back Vision for Music Payments on...

It already seems to be more developed than Ujo ever became, but with a different angle of approach, which is basically like SoundCloud meets Spotify. Being already decentralized, opensource, allowing sign-ups without an Ethereum wallet, and enabling lossless audio upload are a few ways it’s already ahead of Ujo, and, by virtue of the former two, it should prove more or less a permanent platform (which Ujo never achieved, hence how it is now considered to be shuttered).

Now, I was actually quite enthusiastic about Ujo, and Audius should eventually offer sales, digital collectibles, and so on, which is something Ujo did manage to achieve and in interesting ways; as such, I am hoping Audius will adopt some aspects of its predecessor, like setting automatic division if sales revenue between collaborators through smart contracts.

One thing both platforms lack is a full-fledged social layer (comments mainly, though there are at least some basic forms of aggregation), which is not a trivial matter in this manner and level of decentralization. I suspect one possible route of implementation could be through Ethereum World.

Anyway, this is one thing I’ve been really keen to see in the distributed/decentralized space, and though I joined up a little while ago, it recently took me by surprise in just how much ground has already been covered. I still have to give the white paper a good look, but so far it seems fairly solid here at the ground floor.

whoa ! thanks for pointing me to this - I didn’t realize they were an open platform. I hate their web interface already and now I’m curious if an alternate client will pop up or I can build my own to stream my music from my website. woo !