EDIT: SOLD OUT IN 90 MINUTES.
EDIT EDIT: PREORDERS FOR V2.0 IN THE DISCUSSION BELOW.

Thanks for your continued support, you amazing community.

A little while ago I built a really simple module idea for my own rack, and started using it in live performances. A lot of people were asking about it, and a friend asked for one for themselves, so I decided to refine the design a little, and do a limited edition.

The Jackalope is a simple, passive, electro-acoustic module for eurorack synthesizers, designed and built by me, Simeon Smith.

And here’s a little demo video.

If you want one, they’re available via my website, just clicky here.

If anyone feels kind enough to repost this on the muffs (I don’t have an account there) or wherever else you feel relevant, I’d really appreciate it. This is my first foray into making limited releases of conceptual modules, and I need all the help I can get.

This is such a great idea. I just saw this on facebook and then saw it had sold out. Ahh

saw it had sold out

Wow this looks incredible. I’d buy one in an instant.

Hey congratulations! This looks awesome and the video was v well done

I am always sleeping when the cool things happen.

I am always sleeping when the cool things happen.

I would absolutely buy one. It would be amazing to have one where you could switch the tubing fork for different pitches

You can with this one! It’s just one bolt holding it in place. I’ll be doing a similar limited run with different design features soon.

Hmm could I hook up a tuning fork to the Ears module, and end up in a similar place? I’d never though about something like that, but would be really cool. Even useful just for the utility of tuning oscillators, never mind all the musical applications

whoa super cool idea! the artwork is awesome as well Well, it was going to happen, wasn't it? The first batch of Jackalope modules went on sale last October and sold out in 90 minutes.  Version 2.0 is now available for pre-order.

The joke was perfect

@mutedial Thanks, mate! 5 ordered in the first few hours! Tell all your friends.

(final version will not be transparent) 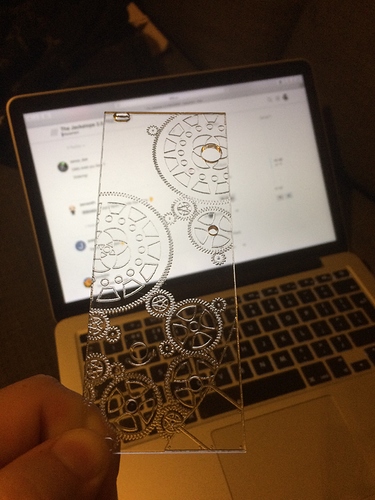