The thread in which we discuss Liquid Petroleum Gas…

What’s your favorite in terms of performance vs. hp?

I have an LxD, and like it a lot, but especially love the sound of the 12db section.

So I’ve been musing on a second LxD vs. an Optomix. Four vs. two gates overall for the same hp, but still only two with 12db.

There are other options that are interesting.

The RYO Aperture is looking increasingly interesting too as a rather deluxe single LPG with expansive resonance options.

Can anyone attest to the sonic and functional quality of the RYOs?

Discuss anything to do with any LPG!

Not euro and nigh unobtanium, but my favorite LPG hands-down.

also a really big fan of mutable streams - two types of vactrol emulation to choose from and no signal bleed.

My personal fave is the malekko dual borg, thing sounds super chunky https://www.youtube.com/watch?v=1tGGSxngk2w though I feel like I don’t use it to its full potential.

Qmmg is my favorite. Can get dirty as a filter. Streams easiest to use and most flexible. Optomix is a staple and my go to as it gets the job done and mine decays just right. Plan b m13 rings for days. Too many days.

I second the liking of Streams, but I also have a fond space in my heart for the Laurentide VG2, which isn’t technically a LPG since it’s a non-resonant lowpass filter without the associated VCA. But, it sounds fantastic with hotter signals, and being able to control the filter cutoff as part of the gate is really nice.

LxD is excellent with maths for using it in series. maths “unity” signal out to 12db cv input, channel 1 to 6db input… and adjust the “filter portion” with attenuverter 1

love my optomix too (not chaining the two halves, using in parallel)

if we also add vactrol based filters (different story though), I really like the couloured sound of the verbos ATC

Just got a secondhand one in the post today. Got woken up by the postman late morning…

It’s really nice, I feeling very happy with the vactrol selection. The top one is quite fast decaying, but has a nice woody slowish attack. The bottom one is very fast & clicky on the attack, but really slow on the decay, should be good for drums.

Having a play with it today has been a useful distraction.

Breaking away from the eurorack world (!? I know raight?!) The Steiner-Parker filter on the microbrute sounds SO GOOD, in particular the way it can be driven both pre and post filter.

I’m also in love with the Doepfer Dark Energy II’s filter. It’s good sounding and the resonance is super-musical. But it’s multi-mode knob switches very gradually from one mode to the next, meaning you can have a lpf, but bring in some high frequency fizz as well.

I had to look up Laurentide–looks cool. FWIW, he’s shutting down his operation, so there’ll be no more new Laurentide stuff.

There’s probably a metaphor in there somewhere about this stupid country.

The ones on my easel (a clone)

My favourite LPG is Buchla’s 292e (I’m sure the none “e” versions are good too but have never used one).
Second favourite is Plan B Model 13.
The Bugbrand one is nice although probably third in my list.

I prefer LPGs to be pretty much purely that. I don’t really want resonance (I’ll patch it if I do) or other bells and whistles built in.

As far as I’ve been able to find, it’s worth noting that none of these aforementioned modules are available new anymore:

One of two that just arrived. 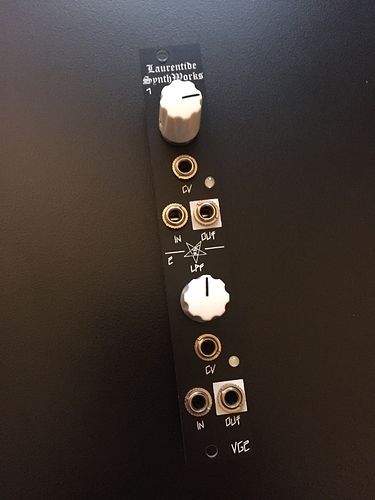 DJ Thomas Lpg (the one with verbos and richter mods - the latest) is by far the sweetest I’ve heard. Impossible to sound bad…