Listened to these guys nerding out https://nowandxen.libsyn.com/29268-cents-kite-giedraitis-aaron-wolf-spencer-hargraves-jacob-collier about this https://en.xen.wiki/w/The_Kite_Guitar this morning and now I want one

I have a few microtonal synths and never fancied the rather arcane installation instructions for Scala on the Mac (XQuartz?) and don’t like involving a computer into my music workflow more than I have to. Plus it’s fun and educational to see all the numbers laid out in front of me. So I created these spreadsheets.

Each of these sheets calculates the cents offsets for each note, and then translates that into the format used for entry on each synth. So far, the Peak, DX7 E!, and Minilogue / Minilogue XD / Monologue / Prologue formats are included.

The sheets are pretty straightforward to use. For the EDO sheet there are cells at the bottom to input an A reference tuning and the number of divisions per octave. Right now it’s got a 19 EDO tuning in there.

For the Ratio tunings, you will need to pick a reference tuning, put that in the appropriate cell (cell d72 for A5), copy that value to each cell for that octave, and then double or have it for the octaves above and below. Then enter your ratios for each note. (Or, you could put the same reference value in for every note, and double or have the Numerators of each ratio, but that seems like more work). Check the example tuning - note that the example tuning uses C as the reference, not A, while starting the octave (1:1) at E - just to show that can be done.

The example tuning was derived from Alain Danielou, Music and the Power of Sound .

It should be easy enough to modify the EDO sheet to get non-octave equal division scales, such as Carlos’s Alpha, but I haven’t done that yet.

Putting these in by hand for multiple synths is a bit laborious. For the DX7 E! I have no choice but for the others it should be possible to save the sheet as a CSV and have a parser generate a MTS sysex file. Haven’t tried that yet either.

Regarding the parser - if anyone has documentation for sending tuning files into the Minilogue or the Peak please pass it along! Neither synth accepts an MTS bulk tuning file and I am hoping not to have to install the librarian software for those synths and sniff the packets to find out what’s going on.

Anyway, please comment if you find this interesting. I’ve been feeling rather invisible lately with social distancing.

As someone with a DX7 and a friend with a Peak, I thank you so much for this.

Thanks for sharing this!

I think because the sheets are read-only, it doesn’t seem possible to clone the spreadsheets or inspect the formulas in the cells. Maybe there is a more portable way to share this?

I just release a synthesizer for the monome that lets you choose whatever EDO you want. I started a thread for it here[1].

[1] A synthesizer for arbitrary EDO (equal division of the octave) scales, written for the monome in Haskell

Of interest to Sequential synth users (or other gear that accepts syses tunings):

I have a fairly new Prophet Rev 2 and was eager to dive into the custom tuning possibilities. After several days of trying and failing to get Scala to work on High Sierra (couldn’t get it to connect to a MIDI output) I discovered the Universal Tuning Editor and it works like a charm https://hpi.zentral.zone/ute

$25 but worth it, given how much time I spent wrestling with Scala. It outputs a sysex file, which needs a minor tweak in a Hex Editor, then loads seamlessly on the Rev 2. Happy to have the workflow going now! It’s a blast to have hands on analog tweaking with my favorite just intervals!
c

Just found a copy of Wesley S. B. Woolhouse’s 1835 book: Essays on Musical Intervals, Harmonics, and the Temperament of the Musical Scale.

In which he used a division of the octave into 730 parts, now known as Woolhouse units, for measuring musical intervals.

Essay on musical intervals, harmonics, and the temperament of the musical...

Book digitized by Google from the library of Oxford University and uploaded to the Internet Archive by user tpb.

A cool demo of a organ with extra keys: 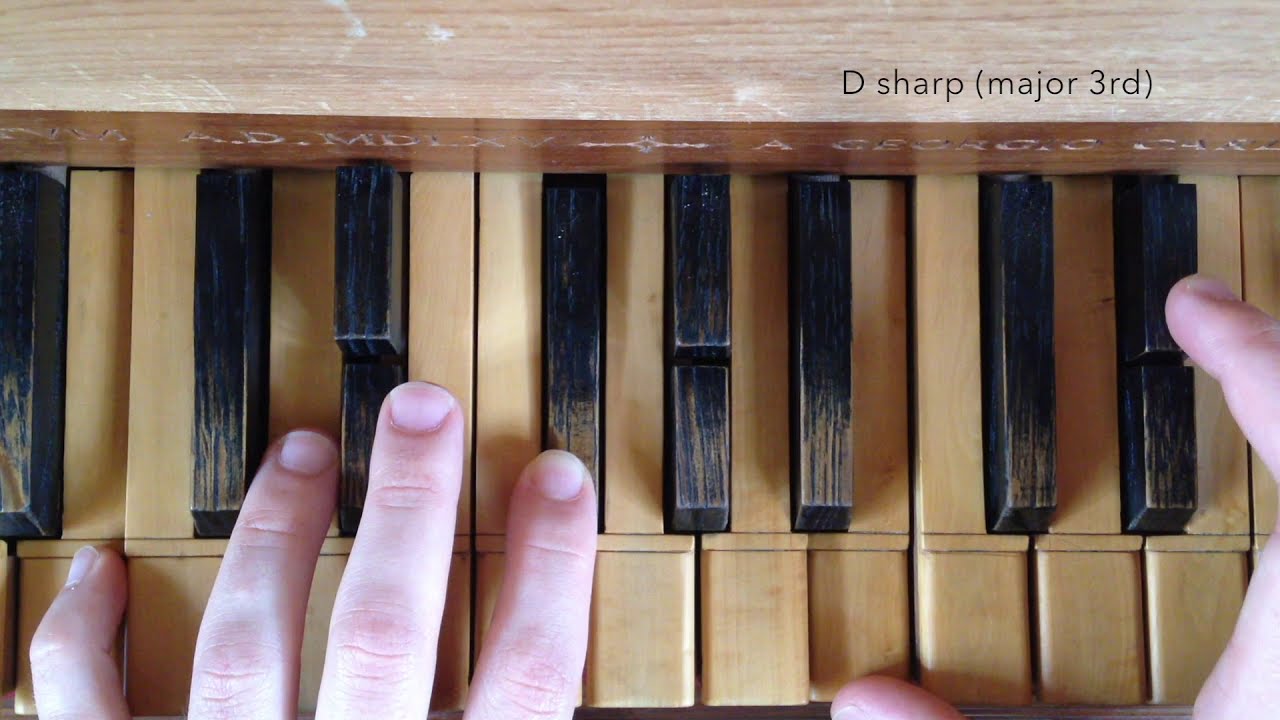 A similar organ: https://www.youtube.com/watch?v=HBxC-Egr73w The video has both talking explanation and some music.

Probably a really dumb beginner question, but I’m working with a set of three sine wave oscillator outputs and into another module which will mix them together in various ways, one of which will emphasize higher frequency partials related to the three inputs. I asked the module’s maker for advice for best results, and he suggested using simple frequency ratios like 1:1, 1:2, 1:3, and common multiples of those. The thing is, I don’t yet really understand frequency ratios and how they work, and how I should tune my oscillators to accommodate those ratios. I generally just tune to C using the tuner built into my Zoom H6, and don’t yet have a Mordax Data for more precise frequency tuning. Can someone explain to me how this works in a way that doesn’t involve having tons of experience with music theory and/or music school training?

I am not sure what you are asking to be honest. Are you saying that you want to tune these three oscillators to simultaneously play sine waves, each of which represents the Fundamental, an overtone and a higher overtone?

Or are you asking what the intervals between subsequent notes in a sequence should be?

I guess essentially is your question Harmonic or Melodic in nature?

(but really, the way to tune this is by ear, first going for the sound of octave+5th, then eliminating beating frequencies. its how people have tuned their instruments to JI intervals for millenia.)

Re-reading I am guessing you are asking how you can tune them simultaneously to match the harmonic series.

Truthfully the answer is, whichever way it sounds best to you. With three frequencies to play with you are only going to cover a small amount of the range (assuming pure sine waves with minimal to no overtones). The harmonic series goes like this: 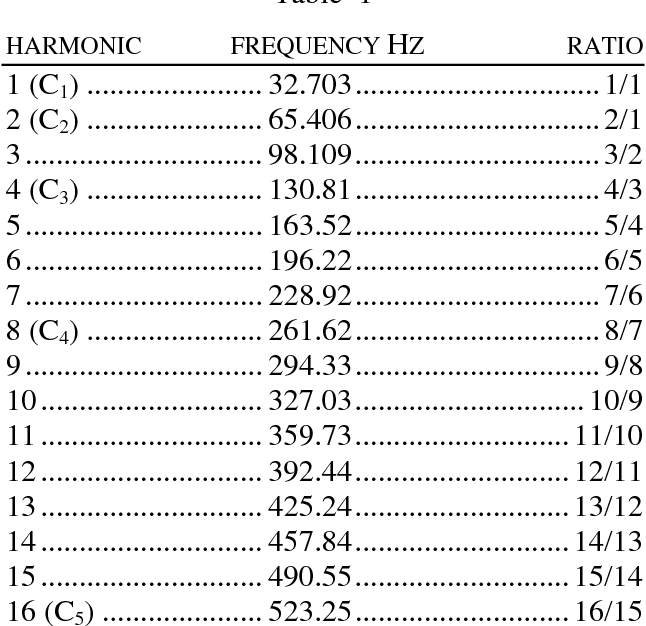 The ratios on the right equating to a (just) Octave, P5, P4, M3, etc. The relative volumes of these overtones contribute to the overall timbre of a sound.

You would therefore probably tune different ratios for different purposes and unless you have a mechanism by which to alter the fundamental and have the overtones follow, you should just do what sounds good to you

i’ll try a 5-minute version of the theory as well, why not:

_(ok, caveat: from here on out there is a focus on european music theory simply b/c that is what i know best.)

in this scale, each frequency has a mathematically-simple relationship with the fundamental, which means that their waveforms are naturally “in sync” and we hear that lack of beating as a “clear” quality.

if you extend this to a chromatic scale, as people started to do in renaissance europe, you might get something like:

where each of these intervals is multiplied by whatever frequency you consider to be “C” at whatever octave.

another consequence is: if you follow a “circle of fifths” using a 3/2 interval for a fifth, you don’t actually get a circle, but a spiral of expanding “pseudo-octaves.”

so, the solution of the baroque theorists was to make every semitone the same interval, regardless of position in the scale. (the fact that we even think of a “semitone” as a constant measure, reflects how embedded this idea of intervallic pitch has become.)

this means that the ratio beteen semitones must be an irrational number: the twelfth root of 2. call this interval c = \sqrt[12]{2}.

this means that if we go up from a fundamental f twelve times, each time multiplying by c, we end up at the octave.

so a whole tone interval in 12tet is equal to c^2, a major third is c^4, a fifth is c^7 and so on, always - regardless of which note or scale degree you start from.

this table shows, for one octave starting on 440hz:

supercollider code to generate the above:

(BTW: its good to learn a bit of supercollider for investigating this stuff, because pretty soon you never have to look up a table again.)

hi folks
i am peeking back ino this massive thread and wanted to ask about the current skinny on tuning files [.tun] files.

I’ve become mystified by T-A-L Sampler for a project I’m doing and it accepts .tun files for it’s microtonality and frankly i am being lazy and thought i’d ask if anyone has made a .SCL to .tun converter for .m4l or has a python script that might address such a need?

also I don’t think i saw someone mention the classic mccartney patch based on partch’s diamond in this thread --i thought this was included with super co or is old hat?

i patched a microtonal organ for pd pd last year for organelle that uses python to make .scl usable for pd but i wanted to ask if there was such an animal yet

Diamond.scd (5.2 KB)
run a few of these in SuperCollider they will help you hear and see unities and interval relationships

I’ve become mystified by T-A-L Sampler for a project I’m doing and it accepts .tun files for it’s microtonality and frankly i am being lazy and thought i’d ask if anyone has made a .SCL to .tun converter for .m4l or has a python script that might address such a need?

You could give this online tool a try, it should do exactly what you are looking for

Ahh, and I completely forgot! If you’d like to explore equal temperaments yourself, I highly recommend this online tool: http://sevish.com/scaleworkshop/ 98

If you want to make tuning files from scratch, this was mentioned at the top of the thread and is a very easy to use scale generator app; can input scale degrees in multiple formats (cents, ratios, etc), preview the scale in browser with your computer keyboard, and export in several formats.