Continuing the discussion from Serge Recommendations?:

It seems that there are quite a few fans of Andrew’s NLC modules.

They’re easy builds using common parts, yet have unusual functionality (even for Eurorack). His most popular module seems to be the Sloth series. They are slow, all-analog chaos generators with three levels of speed (Regular, Super, and Stasis).

I’m particularly a fan of DelayNoMore, two PT2399 lo-fi delay chips tied together with four feedback paths. Most PT2399-based modules pose as echo effects, but this fully embraces the junk quality of the chips with a special emphasis on their failure states.

In the US, his PCBs and panels are carried by ModularAddict and Synthcube. Thonk has a fairly large line-up for Europe. Otherwise, you can order directly from him.

I’m really looking forward to diving into that O+C playlist you posted. You wouldn’t happen to know of a similar NLC playlist would you?

Edit: answered my own question:

His videos can be pretty aggressive, but I find that his modules fit surprisingly well into ambient and softer styles. For instance, this album has Sloth all over Side A:
http://menschmusik.com/index.php/vinyl-mensch/16-mensch-3

slinky cee used a pair of sloths to make this soothing ambient track:

Second section is same patch, but the DPO sustains for longer.

Great thread! Will be back.

totally fascinated w/ these modules, especially the squid axon. if anyone has the EE background for it (i’m still learning!), i’d love a bit of a breakdown of how his feedback circuits work. does anyone have any experience w/ the feedback-oriented modules?

Here’s my own demo of DelayNoMore:
snip
Second section is same patch, but the DPO sustains for longer.

I really like that. Both parts, in their own ways, and the transition.

The first part almost has a bit of this Chain Reaction/Porter Ricks vibe. The second part almost sounds like it’s got deeply burried recordings of found sound in it.

totally fascinated w/ these modules, especially the squid axon. if anyone has the EE background for it (i’m still learning!), i’d love a bit of a breakdown of how his feedback circuits work. does anyone have any experience w/ the feedback-oriented modules?

I ported it to Reaktor. It behaves differently from other ASRs in that the incoming value gets copied to all four registers BEFORE the first register receives a new value.

lovely! i did know there were schematics available, but my understanding isn’t 100% there yet, so i was curious if anyone had deeper explanation. yours definitely helps!

have you got the reaktor patch handy? would love a look!

Of course! All of them are available here:
https://www.native-instruments.com/en/reaktor-community/reaktor-user-library/entry/show/9093/

It includes emulations of NLC’s Neuron, Difference Rectifier, Squid Axon, and Numberwang. Let me know if you have questions on any of the functionality. I’m not EE by training, but hopefully I can help.

oh lovely didn’t realize they were a part of that set! thanks a ton. big fan of your collection 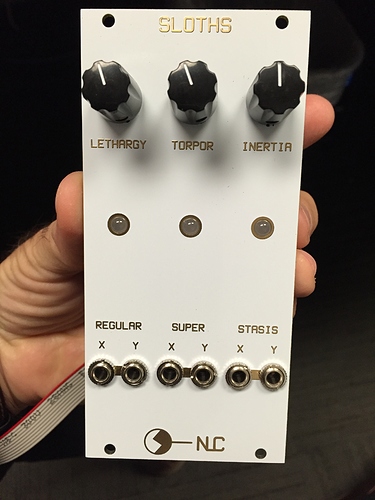 i would love a Sloth, are there any pre-built ones out there for sale?

I got six modules from him; he built them all in a shockingly fast turnaround. From paid order to my door, from Perth, Australia, in a day over two weeks, and that’s in the midst of Christmas mail giftpocalypse.

I know though that in the coming few weeks he’s got some pretty big demands on his time so that could be temporarily off for a while.

i would love a Sloth, are there any pre-built ones out there for sale?

oh cool. Yes, i want it. I will message you on muffs and we can do the paypal stuff there. would you snap a pic? it’s cool if you can’t just interested in checking it out. i think i originally mistook the SuperSloth with the triple sloth hence my request of it’s size. Thanks!

Love the sloths as well. Also built the Cluster Matrix Mixer which is great, but unfortunately too big for my current setup.

Alright, I’ve been on a rampage lately. I had previous built all three Sloths, a DelayNoMore, a Neuron, and a 1050 Mix Sequencer.

I recently finished a BOOLs, a Giant B0N0, a Brain Custard, an 8-Bit Cipher, and a Sloths (the new 8HP triple Sloth with 11 outputs and CV control). I’m currently wrapping up Chopper, FlipFlopChaos, Feague, a double Neuron, and a Squid Axon.

Sloths (8 HP triple Sloth): This is it. This is the one. Build this. This module has excellent taste. Having 11 outputs and CV “control” makes it a new hub for slow, generative patches.

DelayNoMore: One of my favorite effects in Euro. I’m not using this in the full-tilt NLC video way. Instead, I love using it as a gritty, low-fi delay with a ton of hiss. If you like the PT2399 sound, this is definitely worth checking out.

1050 Mix Sequencer: Super flexible design based on an old ARP module. It can function as an 8-step sequencer, two 4-step sequencers, and eight channel mixer, two 4-channel mixers, an 8-input to 1 output switch, two 4-to-1 switches, etc. There are also Diff-Rect outputs to smash the two halves together. I believe that this would be insanely popular if it were manufactured by a larger company.

BOOLs: Very cool, but I’m currently selling it. This is a great module if you don’t have interesting logic duties already taken care of (I have a Plog, which is more logic than one typically needs). The most interesting feature is that it produces a stepped and slewed voltage pair that are based on the state of the four logic outputs. I ported this over to Reaktor since it was straightforward, fun, and useful.

Giant B0N0 & Brain Custard (audio rate version): Crazy, but not for me. I sold these pretty quickly, as I knew that they weren’t going to fit in to my patching style. The video demos of these are very accurate. They’re both very violent and unpredictable. B0N0 has a lot more versatility, as it has a chaotic CV out, two oscillators, a delay, and two gates (one audio rate, one slower). I may try building the Brain Custard CV version, but I think I’ll be satisfied with the Sloths.

8 Bit Cipher: This is like a plus-size Turing Machine. It has the same 8-bit shift register concept, but there are two Data inputs (kind of like having voltage control over the write-1/0 switch on the TM). If Data2 is unused, bits 1 and 8 are XORd and normalled to that input. It creates really nice, complex patterns. All 8 bits are available as gate outputs (kind of like the Pulses expander). There are 4 CV outputs that are voltage variations of the contents of the shift register.

Neuron/Diff-Rect: The single Neuron is a simple circuit that ends up being a lot of fun. There’s a 3-input unity mixer that feeds a comparator. If the mix exceeds the SENSE parameter, a square wave of an amplitude set by RESPONSE is added to the signal. This sounds great as a waveshaper, but I enjoy it primarily for adding some nice discontinuities to CVs. The Diff-Rect is a interesting sub-circuit that outputs the rectified sum and difference of two input pairs. I enjoyed this module enough that I am now building a dual Neuron.

I really want a triple sloth. Need to find the time to build one of these

slow evolving patches are my thing.

@trickyflemming where did you get the 8hp version? I’ve only seen 12hp.