The one knob to rule them all

I like the idea of being able to reproducibly control radical/multiple changes in a modular system with a single twist of a knob. MI Frames and the Cold Mac (surveillance “mode”) come to mind as specific modules for macros, but also other tools like the power starving knob on the MengQi Rollz5. I’d love to know if there are more ways of achieving this “god” knob and what you usually make the knob change while performing.

Probably obvious, but: mult an audio signal. Do different things to each of the outputs. Control all outputs by varying the input.

I like using one of the attenuverters on Maths for this sort of thing. Say you have both envelopes cycling/being triggered, maybe an LFO going into Ch. 2 or 3 (or both), and then use the SUM, OR and INV outs. Changing one of the attenuverters can have drastic effects on three (or more, if you use the unity outs too) parameters in nicely interrelated ways. I generally send it to destinations which change the timbre, or to play around with effect parameters.

Cold Mac is my favourite for this technique, as you said, but you can get similar results, albeit with fewer outputs, from Maths. It doesn’t give you the satisfaction of turning one large® knob, though… it’s just a small attenuverter. It’s also good with other modules that have cascaded outputs so you can mix various mod sources. I use Blinds in a similar way.

I love using my Arc as a master knob… using Ansible modes you can control all sorts of things, including Mac Survey, or any other parameter. I like to use it for LFO rates, signal mix, and effect parameters.

arc + ansible running cycles with sync mode on is a great macro controller.

Intellijel Planar is amazing for this.

Really interested in this idea; mocking stuff up in axoloti where the knob value goes though a modulo function, so for each complete rotation, 5-6 outputs step rapidly and repeatedly though the whole range of levels. I wonder if Cold Mac can be used in a similar way

Not quite the one knob, but the JAG facilitates the many outputs from few inputs philosophy. Combine that with a joystick, or other dual control cv source, and you can have wide ranging and varied impact on a patch.

Not a knob but I use a touch panel for this sort of thing.
I have one in my Bugbrand system which is four plates with 2 CVs per plate.
That can change a patch ok on it’s own but what I really like doing is using the gate out to trigger a sequencer. I tend to use sequencers as big patch preset machines rather than stepping through a selection of notes.
I’ve got some expanders for the Bugbrand one which gives me a total of 32 CV outs with a gate or trigger out per step. Using the touch panel to trigger the sequencer onto the next step with its outputs going to various points in a patch can change things up very quickly.

I tend to use sequencers as big patch preset machines rather than stepping through a selection of notes.

Why did I never think of this! Does the bugbrand seq give you 32 different cv’s out!?

I do this with a lot of controls on my AIRA modules. You can internally route one knob to all kinds of parameters, and also directly to one of the outputs. Go from that output into a buffered mult, and you can split it out for all kinds of fun.

Very interesting idea! Are you thinking of 5 fixed modulo functions so each output has its own phase?

Something like this? The-one-knob (or 10v cv) on x axis, output of various cv out on y. 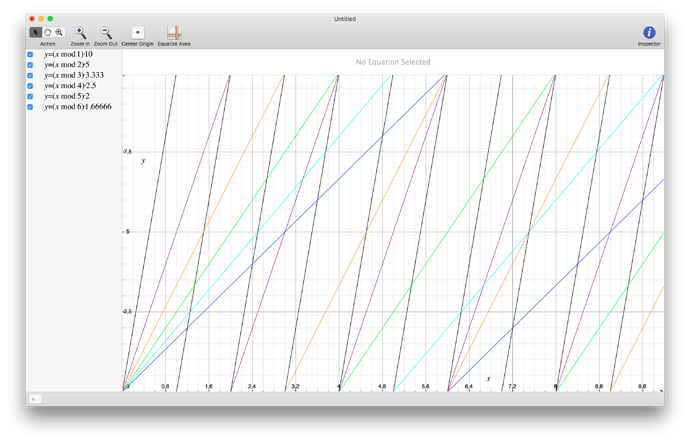 Yes, that’s it. I was trying it with a drum patch - mapping various FM, decay, modulation functions onto the one knob, with the idea that you just twist it until you get something you like.
I’d also really like an analog way to do this, haven’t found one yet (but haven’t spent that long looking). I suppose really it’s wavefolding or wave multiplication.

Why did I never think of this! Does the bugbrand seq give you 32 different cv’s out!?

I maybe could have worded what I wrote better!

I have a total of 32 CVs out. It’s an eight step sequencer and I have three expanders which each give me an extra CV output and gate or trigger output per step.

So for each step I have 4 CV outputs and 4 gates/triggers I can use.

I’ll take a quick picture when I am at home tonight.

Tangential, a bit - it’s not euro - but I was quite taken with http://www.nobcontrol.com/ . It’s a little expensive, but I like that they map touching the metal controls separately to manipulating them, and the richness they deliver from a single knob.

I’ll take a quick picture when I am at home tonight.

Here it is. The hub has all the control functions. The three expander modules on the right follow the hub controls and output a CV and trigger/gate per step. I usually clock it externally with the gate out of the touchplate or joystick for example. There’s a random step mode on it which is useful if you don’t want a repeating pattern of changes. 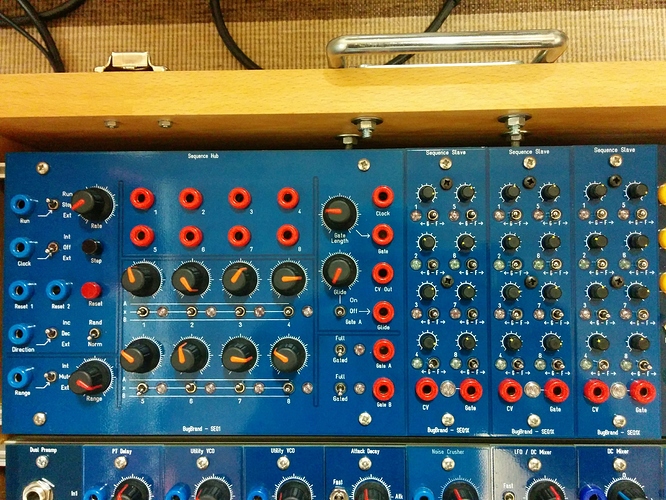 Just stumbled on this thing - still thinking of ways this could interact with my Cold Mac.

If I understand correctly I think we can simply abuse an adc for this… If we take its unquantized bit outputs (residue?) it will give us the same sawtooth shapes. It will have fixed (binary) intervals between the outputs though, but it might be a good starting point.

I wonder if this would work, not sure how to build it