The Quartal Board - a lesson of some sort

As I type this, I am watching the final 2 days of a Kickstarter campaign that may be one of the most phenomenal failures in the history of the website. With 45 hours to go and with a $30,000 goal, the creator has received one backing pledge for a total of $1. Ouch.

Why am I discussing this in Lines? Because based on the information I’ve been able to glean about it, it’s an object lesson on what can happen if a musical innovator becomes so convinced that no one will support their idea that they try to develop it in a vacuum…

Long story short: the campaign’s creator, Geary Thompson, is a musician who’s been making music since 1974 on something he calls the Quartal Board. He’s developed pedagogy for it and even patented it, but apparently (I have not researched this) the patent either ran out or the registration was never fully funded, and the idea fell into the public domain, assuming it was ever patentable in the first place. He’s now nearly 80 years old and figures he has maybe five years of creative life left in him, and launched the Kickstarter in a desperate attempt to get SOMEONE interested in his idea. All he was offering were caps and hoodies for ridiculous prices, and there’s no indication of what he was going to do with the money he raised, aside from potentially developing a sellable hardware device from the one handmade unit he owns.

What’s killing me about this is that apparently the magical new device he’s been developing in isolation over the last 45 years is basically a 9x9 grid tuned in fourths. He appears completely unaware of the existence of the monome, the Launchpad Pro, the LinnStrument, the Push2, and of all the people who are now playing them as an alternative to conventional keyboard technique, which is what he was hoping to encourage in the first place.

On the one hand, ha ha, look at that guy developing something we already have by the thousands.

On the other hand, ouch, 79 years old, he’s already won his battle for his method’s recognition, and he doesn’t even know it.

Here’s the link to the campaign. I have reached out to him with my email address; I’d like to learn more of his story than is available here or at his website http://www.quartalquorp.com . 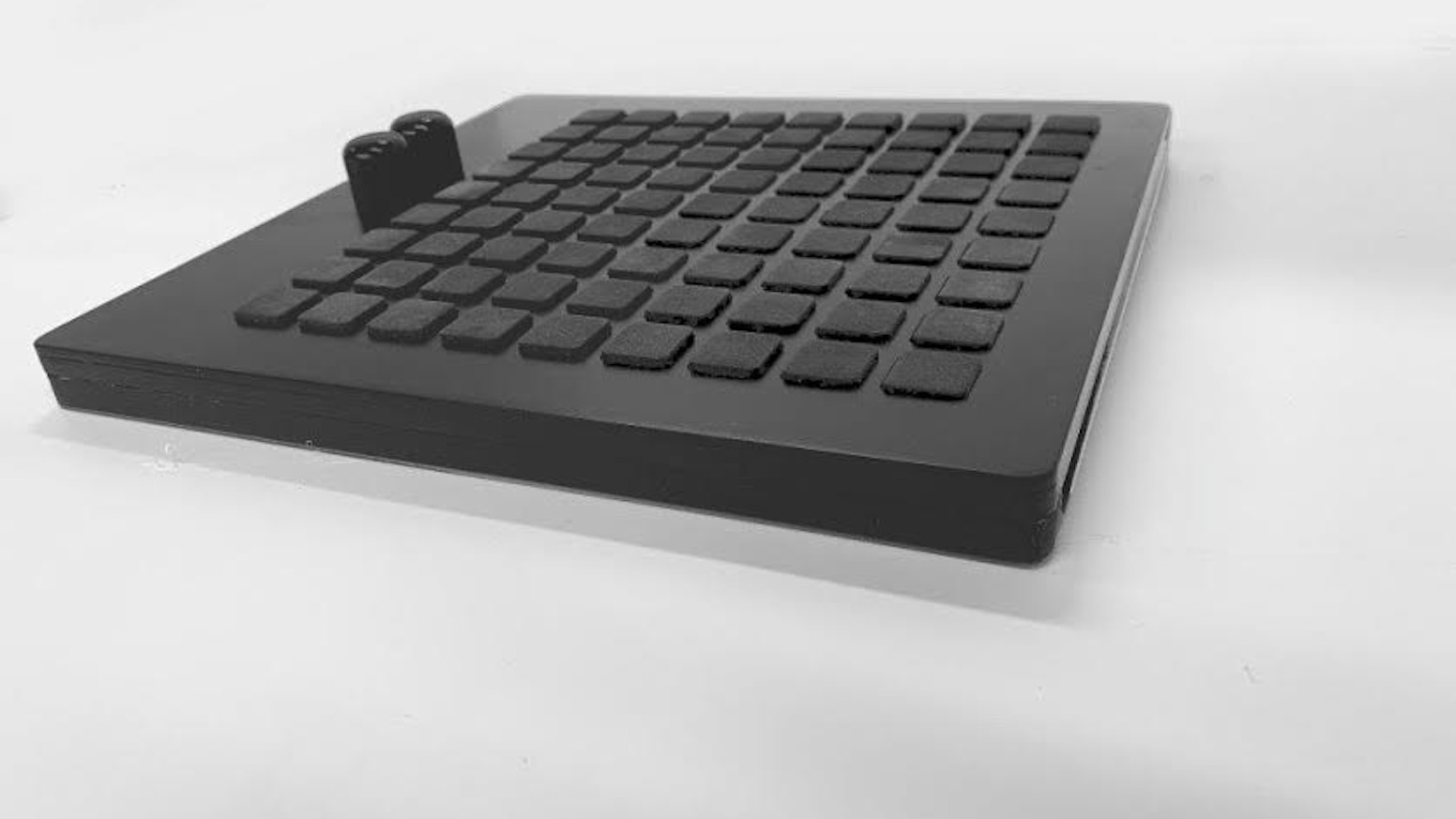 QUARTAL BOARD (QB) NEW MUSIC KEYBOARD-EASY TO LEARN AND PLAY

Quartal Board (QB)--limited manufacture and virtual app design. LEARN ON THE WEB,

The campaign is definitely a head-scratcher: give me money if you like my idea, here’s some swag.

The whole thing strikes me as a cautionary tale to never get too attached to your ideas. Imagine being so enamoured with a single , barely realized invention for 45 years, especially in abject isolation from the market you wish to serve.

I’ve known similar people over the years, seemingly convinced that just having this one idea was enough to push the thing into reality and subsequent success. There must have been some bad business advice book written in the 50s that advocated the get-a-patent-first approach to DIY success, I’ve seen it so many times.

The items on offer are also pretty expensive, for example $100 for a t-shirt and $200 for a sweatshirt. There isn’t much detail of the actual product as far as I can tell from the description (i.e. does this output audio? MIDI?).

does this output audio? MIDI?

Based on the video on this page of his website, I think it has some kind of rudimentary transistor organ in it. But it remains a mystery. The keys certainly are clacky, so you could mic them.

I love this story, please follow up if you learn more about it. This should be an article.

“The QB is capable of playing anything a piano keyboard can do” umm, no it can’t Geary. Yeah, this is certainly an interesting case and kinda sad. It’s also a little admirable though that he believed in this so much and continues to do so.

I have a feeling the prices perhaps reflect someone taking advantage of him?

Wow that video effectively killed my long-held desire to make a DIY mechanical keyboard monome grid. I thought having a bit of key travel would be nice tactile feedback, but it actually looks excruciatingly cramped.

Thanks for sharing this.

I don’t understand the kind of mean tone (no pun intended) I’m reading here – he’s sharing an isomorphic approach he’s been playing with for a long time and even dedicated it to the public domain.

I don’t understand the kind of mean tone (no pun intended) I’m reading here – he’s sharing an isomorphic approach he’s been playing with for a long time and even dedicated it to the public domain.

If I had to guess it would be the healthy dash of hubris + weird “just give me money” kickstarter? I confess to reacting a bit negatively to it.

I don’t mean to come across as mean (also no pun intended). I think that he is a little bit deluded though. He has a project update which is very defensive and begins with:

“The QB is not a toy, gadget or just a musical tool. The QB offers a direct challenge to the piano keyboard as both a learning and performing musical instrument.”

I mean, this is a very defensive response to the only questions I can see being essentially “How does this help get me a QB? You aren’t offering it for sale”.

Everything I see on the website at least points to it as an isomorphic keyboard layout not the grid hardware implementation in the demo per se. Maybe that’s causing some confusion. Seems like this might be of interest to anyone with a grid controller.

Sounds like kickstarter was the wrong platform for him though. It’s really product-based. Probably making something like a patreon account for those who find this layout useful and want to give something back as thanks would make more sense?

I read the whole website and watched all the videos. He even has a business plan up there.

There is a definite tinge of slight bitterness and feelings of superiority in his language, respectfully. I had to chew on this story a bit, but I think it’s what happens when you have a good idea, but you just want to keep nursing it and nursing it. Perfectionism.

Had he let the idea out of the nest when it might have been novel. Gotten some feedback on it, or team up with a business minded person. It very well might have gone somewhere.

Now he ended up with a schmalzy dated organ sounding, click-clackity prototype.

He comes across as a very intelligent but out of touch person. Something I’m working on daily, to not become.

Be open, get your stuf out there. Have fun. Don’t try to perfect this world-moving technical idea.

It’s like a kid that never left home until, he’s forty and still living at home. Great mildly tragic story.

With them all right next to each other yes, but with some spacing I think it would be excellent to have some spring, and some velocity output too. Though maybe we can’t since it may fall under his patent?

he let the patent expire apparantly

Thank you all for the very thoughtful responses. I’m glad this didn’t fall completely flat; it’s exactly the sort of thought-provoking dialogue I rely on in Lines when other forums make me want to eat a gun.

I have sent him an email and offered to chat with him, possibly even have him get onto the forum and say hello on his own, but I agree with posters who are noting that at this point he may be too attached to his method to be interested in give-and-take… it almost seems like he’s expecting people to fall at his feet over this revelation. I really, really wish I knew how much HE knows about the current environment out here…

that’s what i’d be most interested in, does he know about the other instruments out there. and what he feels about those. and him not succesfuly getting a really good idea out there, before the ‘competition’.

you really do have to ‘live while you’re young’, I do believe in that.

To close out this topic: I heard from him. I won’t paste his email verbatim without permission, but to summarize…

There’s not a lot to say to that, so I consider the matter closed. I have to go back to practicing with my LinnStrument.

There’s not a lot to say to that

Well, the Kickstarter campaign said he would continue on with the goal of producing the device/educational kit even though it failed. I wonder what the planned cost of it will be? Given his fondness for it, I’m guessing not cheap.