Another stereo reverb after the mono one.

The Zoom CDR, a cheap multi-effect pedal, really excels at adding a stereo dimension. If you use a wide modulated plate reverb after your “expensive” mono verb it gives a great wide sound.

TBH, the reverbs in the unit themselves are amazing value for money. I’m a big reverb nerd and I’d be pretty happy just using the stock algs, or stacking a couple of them to make something more unique.

It wasn’t really planned, but I got two old rack-units in a package-deal – a Roland DEP-3 and a Roland SRV-330. From what I understand they are quite popular “bang-for-buck” reverbs in the lower price-range, but since I already have an OTO Bam, my plug-ins and pedals – I’m unsure what to do with them? At the moment I’m undecided if I’d be better off selling them in order to reduce my possibilites and focus, or if it would be cool to have multiple external-aux-buses from Ableton Live when mixing.

Any tips from the more experienced?

WOW! That is really cool! I don’t know that much about Shnth, but I didn’t realize it could be used to process audio. Props to you for putting together your own reverbnegog. I’m seriously impressed by this—it sounds really cool too!

thank you! I’ve heard it said that the inputs are better for CV than for audio but this was my first experiment using the input at all — the mic input pretty much is described by the opcode “wind”, it only picks up windy noise, and the jack input is likewise very noisey as you can tell from the audio clip. So I wouldn’t say this is a primary or even secondary use case for a Shnth but it’s obviously possible! For example, at the moment this script doesn’t take advantage of the control interface at all, which is by far the most interesting thing about the instrument in my opinion, but I’m trying to think of ways that control of reverb might be interesting… like controlling the filter level using antennae, or sticking presets behind the buttons… not sure 4 comb filters and a LPF give you enough variation for that to be too interesting, but it requires more experimentation…

The Shnth has a mono sound input which is converted to 8-bit digital audio. I’ve used it before for this lo-fi effect, just like some use their Microgranny for resolution reduction.

The microphone can be nice for nasty bullhorn-like vocals. @Wednesdayayay’s pillow fight situation has several patches for sound input that are good for this.

2 posts were merged into an existing topic: Norns: what is the reverb algorithm? [SOLVED]

it is just a bunch of filters inside of each other being controlled by the bars
but the values were tuned over time in such a way that the natural state is silence and in order to make noise you’ve got to be playing all the bars in different ways.

I mean I don’t feel like the jack is too noisey just make sure the audio you are pumping in is line level and turn it down before it goes into the shnth if it crunches too much. as yasha stated it is mono!

I would like to add a new reverb unit to my system. I am trying to decide between OTO BAM, Chase Bliss Audio CXM 1978 and Vongon Ultrasheer. (From what I’ve read, the three units are inspired by the late 70s reverbs, so I think they are comparable, correct me if I’m wrong.) Which one do you prefer and why?

I fell in love with this. Just a preamp for a tank tho-but a clever one, if your heart lives in Reggae

I just got the XODES kit for adding ZDSP cards to the Pico DSP, and I am extremely pleased to have Halls of Valhalla in 3HP. There’s other good eurorack reverbs, but boy do I love them algos, and I love them even more without the massive HP sink that is the ZDSP. 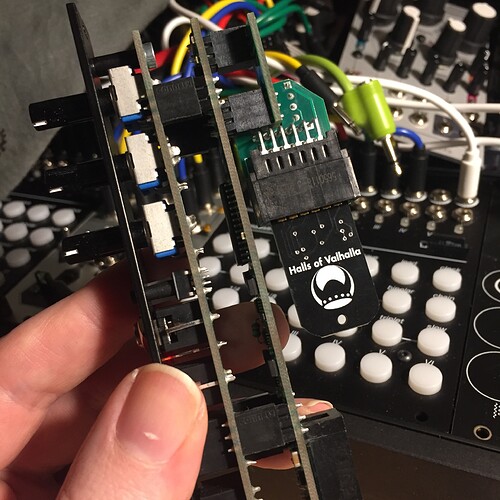 (It does require desoldering the existing EPROM to work, but you are also provided with a card to solder it on to if you want to use them. There’s also versions for Black Hole DSP MK1 and MK2. The only catches with the Pico DSP is that the signal is only full wet and mono in, which is fine for me, as I use it with an effects send rather than inline within a patch. Using a Black Hole gives you more of that back, but still saves on the foot print.)

Nice, I’ve been eyeing that myself. 2 questions: how deep is the module now, and how hard was desoldering the chip? I’ve done some SMD soldering but that chip is tiny and desoldering it looks challenging/risky.

I would like to add a new reverb unit to my system. I am trying to decide between OTO BAM, Chase Bliss Audio CXM 1978 and Vongon Ultrasheer. (From what I’ve read, the three units are inspired by the late 70s reverbs, so I think they are comparable, correct me if I’m wrong.) Which one do you prefer and why?

I’ve owned a BAM and it was pretty great (loved the freeze button). I may get another one day. The only thing I didn’t like was that sometimes the display doesn’t really tell you what you’re choosing.

The chase bliss pedal looks fun, but very expensive. I don’t need motorized faders and some of the things it offers. What I do like is the secret ‘scatter’ delay and the approach to dividing the frequency bands of the reverb.

Something that I’ve been looking at for a while is the Strymon Flint, which has a 70’s era reverb. I think I read somewhere that this reverb is not part of the Big/Bluesky pedals and is potentially darker. Here’s the description:

“The ’70s Electronic Plate Reverb pays homage to one of the earliest digital reverbs ever created. The astounding hardware-based algorithm used multiple delay-lines configured in parallel, with each delay featuring multiple output taps and filtered feedback paths. The result is a rich, smooth reverb with a very quick build-up in density due to the summation of the many parallel output taps.”

It is a little more limited compared to the others though, with only decay, color, and mix parameters.

Just a preamp for a tank tho-but a clever one

yeah nothing can replace real springs
EDIT: there

Something that I’ve been looking at for a while is the Strymon Flint, which has a 70’s era reverb.

In the Why we bleep interview, Sean Costello raves about the 80’s hall algo in the Flint. It does seem worth a look for a hardware take on vintage digital verbs with streamlined controls.

Thanks for the info!

The chase bliss pedal looks fun, but very expensive. I don’t need motorized faders and some of the things it offers.

I don’t need motorized faders either. And yes, it is very expensive. I would buy it only if sound quality were far superior. Otherwise, I think I prefer BAM or Ultrasheer…

The thing about Ultrasheer is that it’s all sweet spot. There’s not a bad sound on that thing. Plus I’m just really partial to vibrato after reverb.

I’d throw the DBA Rooms in the mix too. It’s great, and cheaper than everything you mentioned.

I’d throw the DBA Rooms in the mix too.

I’ll take it in consideration!

Quite deep, but I don’t have an easy way of measuring. Maybe shoot them a message on Instagram or an email and ask? They’re pretty quick to respond.

As far as desoldering, I had an easy time of it with Chip Quik. That would be my recommended way to approach it.

Found this thread about FV-1 pedals in Gearpage (and link to this Reverb post) but did not find what I was looking for: is Generation Loss a FV-1 pedal (like Arcades and Outward)?