The trend of keeping the controller tilted towards the audience, or the woes of performing live with electronic instruments

On the subject of guitar ergonomics: 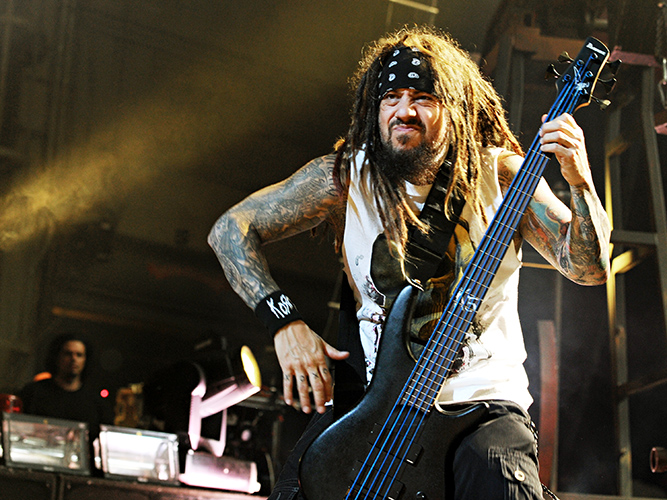 It’s interesting to notice that my own attitude was changed by that thread, in hindsight. Well, by @Simeon’s Sleaford Mods post, mainly.

…And once again incase anyone missed it:

I’m glad someone mention Sleaford Mods. An amazingly engaging live show. Although what makes them especially fun to watch is the dichotomy between the singer’s intensity and the musician’s lethargy.

As I’ve gotten into modular performance this has been top of mind. Coming from mainly performing as a guitarist in an experimental post-punk band and a computer musician before that the modular feels right in the middle. It’s not as isolating or inward facing as a laptop, but it’s certainly not as physically expressive as a guitar. It feels sort of like piano performance. You can move expressively, but the audience isn’t really following the details of your hands.

I think it might be. I definitely learned some things about how to patch a Buchla from watching Suzanne.

a slippery slope for sure…
https://www.youtube.com/watch?v=Rz3JhKXJDTM

Nitro knew the score back in the day.

In this particular case, it seems to me the “performer” is the sound system (and to some extent the sound engineer) and that’s what you’re here for. I think there’s really no book saying the performance has to be executed by a human, I think what people come for (ideally!) when they go to see a performance is a context. What I’m looking for is something that wouldn’t happen elsewhere. Sometimes the sound system is that thing, sometimes the musician is that thing, sometimes the visuals are that thing. After that it’s a matter of how well executed it is, no matter what “it” is, and how relevant it can be regarding the goals that were initially set for the performance. 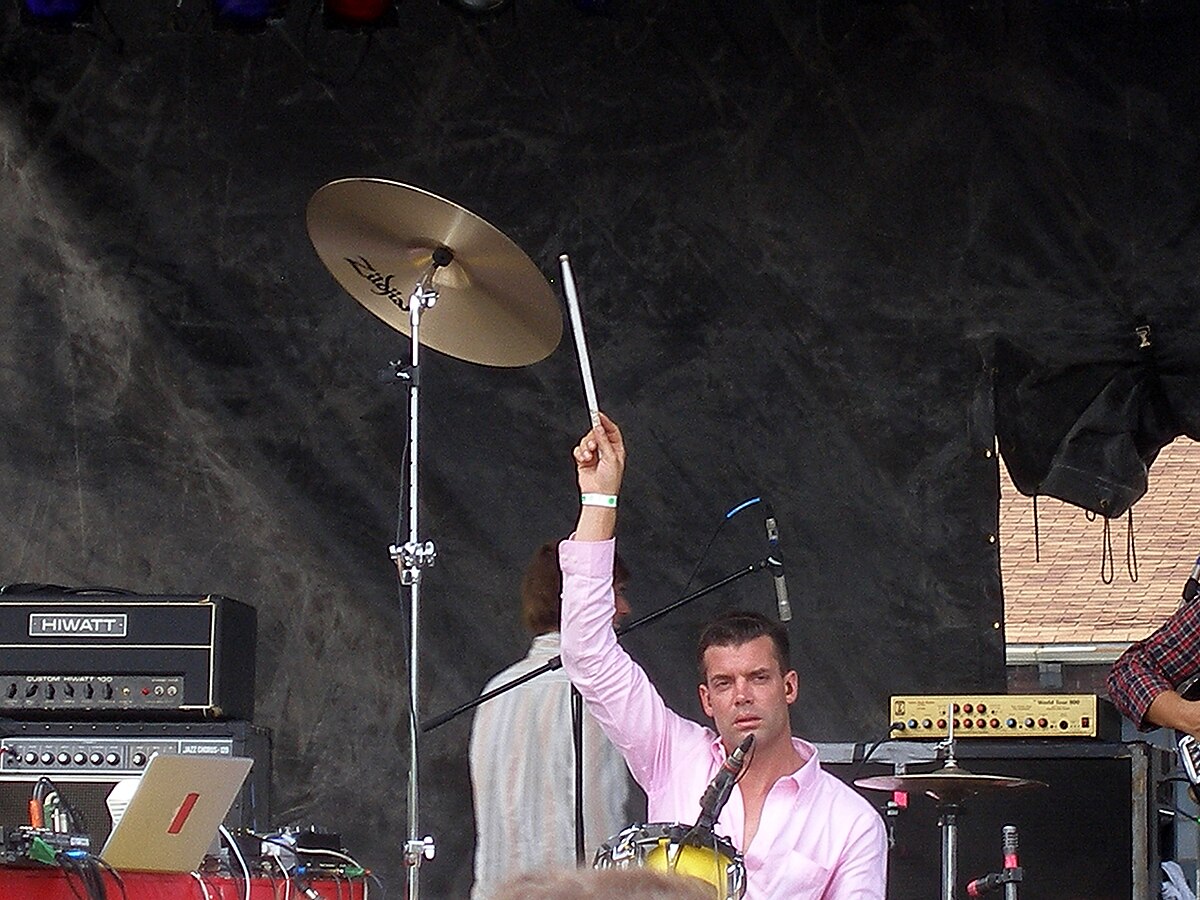 Yes but it’s obviously irrelevant here because the cymbal is clearly tilted towards the musician.

The motivation behind this seems to be it’s inherent lack of ergonomics (also looks cool).

John: I didn’t want any cymbals but the hi-hats at first. Then I was like, “Okay, I’ll use one,” but I didn’t want it near me because I’d use it too much. So I set it high so I’d have to work to get to it. I wanted it to be significant; I use it as a marker. It’s like a master reset button when I go to the cymbal. Plus, it looks cool.

Experimental rockers Battles released their sophomore full-length, Gloss Drop, this past June. Their powerhouse drummer gives us a look behind the scenes of this unique band.

That’s why I played my drone modular set a couple of weeks ago like this: 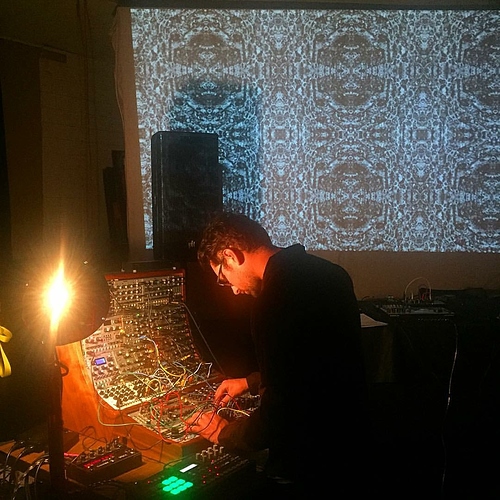 The photo is taken from the point of view of the audience.

At least if someone can’t figure out what I’m doing, they can at least see I’m doing something.

I also recall seeing @analogue01 play a show a few years ago where he just had a modular on the table and the audience was free to walk around from all sides and watch him play it. I thought that was pretty effective and engaging as well.

Ideally I’d like to get electronic music performance to more of this level: https://youtu.be/UPBSWWoxfWY

(that’s me in the back middle).

Was that at the Skylight Gallery circa late 2014? Here is a picture of that event: 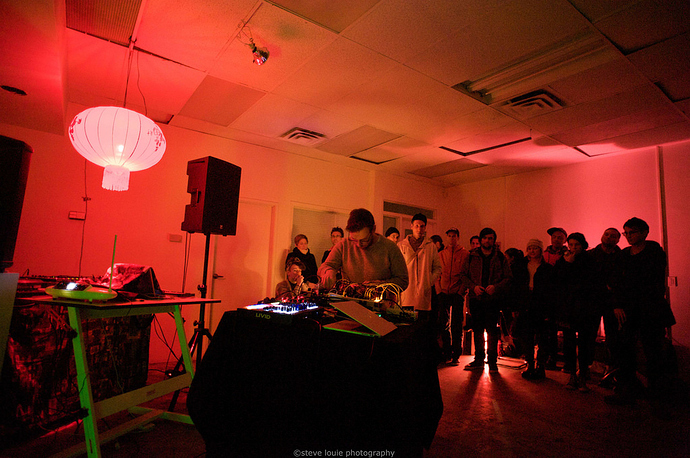 I quite like this idea, and might try it at my next show in a few weeks.

Several of the performers at the Don Buchla memorial opted to perform next to the soundboard in the center of the audience instead of on stage. Everyone clustered around. It worked.

Yep, that’s it. I think that’s me just over your right shoulder

Last year I saw this guy play with just empty tapes in this old, abandoned greenhouse, in the middle a the slightly decadent hotel park. The hotel is one of the old ones in the city, and it’s kind of a luxury one, but you know… the kind of last century luxury somehow.
It was plain day (which usually does not help a musical performance to be really captivating) but it was really great! The musician didn’t do much, as you would expect from this type of music. But the fact that he was messing with something so physical as tape and you had it running around the room (which is probably been done by a lot of people previously… but so it stagediving and guitar soloing) was making the performance very much alive. Also the location helped a lot. The tapes he was using had been left to rot in various places (like for example the sea beneath Venice), so it was very fitting to see him play them in a “rotting” place like that.
It really is all about the theatre I guess.

i think a large part of any performance are expectations- what the audience thinks they are going to experience and what you actually want to present them. then a large part of the craft/art of a successful performance is how those 2 things meet in the middle. more specifically, you want the audience to be receptive to whatever it is that you want them to experience. and usually a good way to get them to have an open mind to what you want to do, is to acknowledge their initial expectations and then break that… kind of reset them back to zero somehow.

personally i don’t find this game to be a bad thing. on the contrary, i think its an opportunity to really make the performance stand out if you can get the audience on your side relatively quickly. and for sure the techniques to do this might not be hard at all- could even be a photo on the event poster or a tag-line or sub-title. or the name of your band itself can do enough to address a certain expectation and communicate how you will fill that role (or otherwise).

i studied this problem of “playing live” for a long time before composing my reactable set. i think i came to the same conclusion as many others here, that the best i could hope for is that the audience would think that the music was live, happening in that moment. beyond that, in terms of them understanding exactly how the music was being created… it was more than i could handle in that project. however, while reading articles and watching videos to see how everyone else deals with this, i came across a fascinating paper which spoke about the subject of time on stage. more specifically it got weird when speaking about video projection- of how we see a video being projected that is clearly in the moment, but if its a “movie” then its probably been previously recorded. and yet we still get some sort of sense of “live” from this video. and of course mixing this with a live video feed… we somehow give video a certain sense of authority and authenticity where we more easily accept jumps in time or different rhythms of time.

all of this to say that, tilting a controller might be one small technique to help address what the artist perceives to be a barrier between what they want the audience to get out of the performance, and what they think the audience will expect in that specific context? personally i always try to make production decisions based upon the artistic process of the work involved. maybe its a failed game, but most of the time at the least i get more confidence and probably give a better effort. so i’ll try to think of the way i came up with whatever i am presenting, how those choices were made. and then i’ll try to think of applying those choices (in concept) to the lighting, costume, sound design, etc.

i’m glad daedelus finds it useful to tilt his controller… what really confuses me is that he uses a towel to do it! he seems into building a certain aesthetic, carefully choosing what he wears, and taking care to show the audience the grid. i guess lots of times the towel is hidden under the 256, but i’ve seen tons of video and photos where the rolled up edges are sticking out on either side!