A thread to share and discuss thoughts about musical instrument in a philosophy angle,
words to understand and guide practices.
While technology gives us freedom, philosophy lead us to choose the forms and functions.

This forum is perfect for this discussion, with the leading of @tehn and @Galapagoose.
Both have been expressing their significant opinions with their designs. 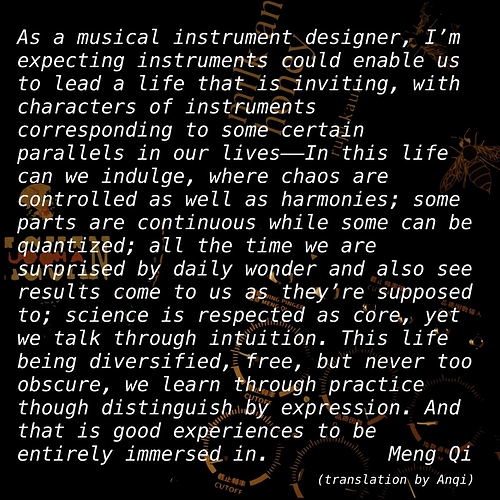 while I am very much just starting on my path. having only recently recognised part of my practice being Musical Instrument Design (pagefall apps, Islands, and a bunch of (so far) unreleased things) there is something in your statement “where chaos are controlled as well as harmonies;” that really resonates with me. The idea that one can encapsulate process and systems alongside of performance.

I’m also really intrigued by making those instruments available to others - much more than say a piano or flute (simply by having existed for so long), an electronic musical instrument can bring the designers philosophy right into the use of that instrument.

I guess I don’t really have a great deal of experience to draw on yet. My work is largely intuitive at this stage but very interested in hearing what other, wiser, instrument designers think about these topics.

I appreciate how your quote seems to be emphasizing on dualities, @MengQiMusic. Care to expand on that?

I’m also curious, since modular systems are constructed from parts (modules), would you consider as an instrument designer someone who creates the modules, the modular system, or both? Or is this discussion mainly aimed at manufacturers of standalone instruments?

I’m trying to asses to what degree I can contribute here with my naive perspective on the subject. Very interesting discussion. I’m a firm believer that the philosophy and sensibilities of the designer become apparent in the design of electronic instruments, so this thread is very welcome!

Dualities comes from human and life, I see instruments as life companions way more than tools.

(not just in an objective way, but also subjective : if you build a patch on a modular synth and practice playing, it’s a “standalone instrument” for you. But you don’t find a community for the same instrument, nor the patch is optimized at a low level of circuit & code.)

And for a designed gesture to work, a fixed “gesture - sound” mapping is required, much like an acoustic instrument.

I’ll take Buchla 223e as an example. It’s perfect for the purpose here, because it’s a module with a designed gesture - freely configurable while the two hand pattern is fixed. The openness virtually avoids the player to practice and build muscle memories, converting the iconic interface pattern redundant, and making 223e more of an interface at utilities level.

After listening to this podcast

I got inspired to start collaborating with a luthier friend to create a custom Kite guitar.
https://en.xen.wiki/w/The_Kite_Guitar

Current events have been a bit distracting, but we will make slow progress.

much more than say a piano or flute (simply by having existed for so long), an electronic musical instrument can bring the designers philosophy right into the use of that instrument.

can a designer’s philosophy, when extremely apparent in implementation, can stand in the way of the relationship of between the musician and the music they make with that instrument?

I don’t intend to say that the designer’s philosophy has no role, it is the foundation for the instrument being built in the first place. I just wonder if, no matter what the instrument is, if that concerted thought and effort on the part builder should even be a point of focus for the musician.

one of the things I actually really like about playing and building acoustic instruments is that their interface tends to be so direct and (sometimes, not always) simple that they leave a lot of room for the musician to focus on the music, rather than focusing on how to operate the instrument at all.

when building familiar instruments, even ones that have large learning curves for operation, the goal of the designer is to make the instrument so well that the gap between what the instrument can do and what the musician expects of it is erased as much as possible.

Something that I struggle with is investing in instrument creation vs music creation. The whole point of instruments is to create music so often times I feel like improving technique on instruments is better spent than specializing an instrument.

However, I got a damn EE degree and I want to use it on something!

A designer’s philosophy doesn’t stand in the way between a musician and the instrument, it’s actually more than that, on a meta layer. The balance of freedom and limitation in functions, the interface that set priority order for the controllable parameters… all the design decisions form an underlying suggestion, of a way to interact with the instrument.

And this, is the basis of the relationship between a player and an instrument, to obey or to break, whichever.

Yes, it’s the talented and dedicated players that push boundaries, who makes an instrument classic. Thus a standalone instrument has a chance to be a classic, for the simple reason that many people can play the same thing. Another reason why I love standalone more – it provides a common ground for players to communicate and comprehend. As the players of the same instrument feel emotionally closer just by knowing that they play it.

Finally, you talked about “direct” and “simple” factor of acoustic instruments. That’s exactly because of the strong present of “desigend gesture”, which is forced to happen. Since the mapping between sound and interface is determined by law of physics, they can’t be isolated like on an eletronic instrument.

Author & Punisher’s Machines to me are perfectly designed for the musical style he performs. There is a kind of visceral necessity for instruments to fit the motion of the music in some way. Slamming a 10lb piece of metal into another one to make percussion should create output that is equal or greater than the expected physical expressions force intuitively. I’m working on an idea for a drone machine that uses a metal lever to generate LFO’s, the lever uses pistons to produce extra resistance.

philosophy lead us to choose the forms and functions.

For my designs (landscape) I seem to write a good amount, sometimes 10-15 pages for one idea with a combo of general use, industrial design, functions, and why. The why of an instrument is what interests me the most. It helps allow the other elements to circle back and reference the original intent when importance is placed on it. So, I seem to start at why so I can try to revisit why as things become more clouded during the design process.

I define why starting with the more obvious, “why does this need to exist?” (for me at least…).
And then if it’s going to exist why does the design look the way it does and what are (can be) the implications of the external design on the internal design and vice versa. I really want an instrument to sound how it looks but obviously that’s a pretty personal parameter to define.

Like a good amount of people I think simplicity and limitations are amazingly freeing. The freeing portion is what is possible when possibilities are taken away. The instrument is both there for the user in a more present form and also out of the way so you have the option to come up with new ideas for use. The meditative aspects of making music are both what allowed me to and compelled me to make more of it for 25 years so far. So when I think about the instruments I want to use or see exist, they fall into a meditative territory. What looks peaceful to use? What can I sit in front of for 4-6 hours and feel like ideas are moving through fluidly while feeling a greater connection to the audio? I enjoy electronic instrument experiences where you find yourself looking off into the distance between your speakers while you work. If you find yourself trying to see sound I think that’s a really good sign.
-Eric

It’s great to have your words Eric! Thank you.

Here is the link to Eric’s “Why” of instruments. A joyful and informative read, I highly recommend : https://www.landscape.fm/why

About the look of an instrument, I totally agree with “implications of the external design on the internal design”. And there is a trend to simplify the look.

Much like architecture, the form of musical instrument has gone through the Classical and Modernist era, which seems to be an inevitable pattern as technology rises. Decoration in the form of luxury materials and fine carvings, are gradually replaced by useable elements and ergonomic layout.

We still favor decorations, but they has to be functional, logical, clean and frugal. ENIG is preferred over HASL, not just for its golden look, but also corrosion resistance, long life and a flat surface. LEDs are very welcomed as long as they indicate signals, events or states. Rectangles are more appreciated than other shapes, for the efficiency in production and the use of space.

I guess it’s also because of the huge amount of freedom we have with technology. As you said, “simplicity and limitations are amazingly freeing”, thus we are self-disciplined with a technological principle, practicing minimalistic approach in designs.

Your last chapter about meditative value is both poetic and practical. Under the obvious and concrete need of sound and functions, there is always a wish for time of immersion while we choose an instrument.