I am becoming more interested in writing music with more complex meters, and meter changes. I would really like to find artists that do this so I can study them, however I am finding it difficult to find any.

Anyone have any good suggestions?

While ambient and/or noise centered music is also welcome, the music I plan on writing is not really in that style so what I am really looking for is more sonically accessible, but utilizes time signature changes and more complex time signatures. Essentially the mathrock of Electronic music.

I do of course know of Autechre, though I haven’t yet really delved into listening to their music.

http://robclouth.com is one guy that I like a lot, I find that he shares a lot of similar music concepts to Steve Reich, in terms of slowly shifting patterns that will synch up at certain points and then drift away again. Also their melodies seem very similar.
Though Rob Clouth isn’t exactly what I am looking for either because he does generally keep pretty constant meter in his percussion and bass sequencing, his melodics more drift around in free meter.

Anyways, I really look forward to all of your suggestions,

Not electronic, but check out Dave Brubeck. Excellent example of layering meters to develop more complex time signatures. Check out Take Five and Blue Rondo a la Turk. The latter is in 9/8 felt as 2-2-2-3, with solos in 4/4.

I don’t think we’ve even started to scratch the surface of what might be possible with electronic jazz.

I love mixing time signatures, so i’ll shamelessly illustrate with some of my songs :
Here at 1’28’’, you’ll find a superposition of 2/4 (drums+pizzicati), 5/4 (chords and violin solo), and 3/4 (6-notes synth sequence)

I learnt everything I know about time signatures from these guys:
https://www.youtube.com/watch?v=aCGUt0pDDIc

Oh and these guys:

you can find interesting pieces by Floex (Tomáš Dvořák), Ochre, and Plaid. Autechre divide the measures in interesting ways but keep a straighter meter more often than it appears =]

i prefer this over strict fractional overlaps for complexity…touching on brubeck, it’s a raggy waltz is my favourite case

but also used quite often in pop and great hiphop (stakes is high, antiquity etc)

Yeah, I agree that there isn’t too much of this in electronic music. And in many cases it’s often */4 type odd meters, which can be interesting, but not too engaging.

I’ve not listened for a ton of this, but the closest thing to this, for me, is the ‘in between’ beats part of Aphex Twin stuff, in the sense that things not only drop the 4/4-ness, but they also drop the grid. I presume this is because the workflow literally pushes it outside of a DAW (or sequencer) grid for those sections, but you can hear the subdivision disappear too, which for my ears leans towards a more creative use of time manipulation.

Not electronic, but I find this kind of time manipulation much more interesting that “straight” time stuff (ala Tool/Sting (which I did grow up enjoying as well)):

Cant wait to watch these at home

funny too because when @jasonw22 posted 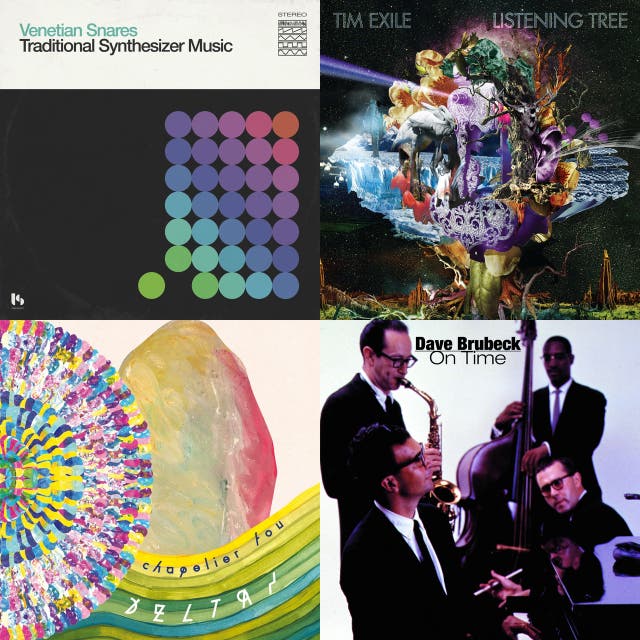 Time Signatures, a playlist by Jason Wehmhoener on Spotify

i fell backwards into electronics thru this kind of stuff

the progression has been interesting because i literally used to count out brubeck tunes while trying to follow and calculate . then discovered additive meter in hindustani classical . stacked tempos in tuned gong ensembles

I’m really bad at counting while playing, but if I suffer through it long enough, it starts to get into the muscles and I can just do it without thinking. That’s when it starts to be more about dynamics and feel. So much easier to get there if I’m playing with other people, especially if they already “get it”.

One of the disadvantages of moving out to the country is that I have a lot less (well, basically zero) opportunity to learn by osmosis these days.

Hey guys thanks a bunch for the recommendations, I will definitely check those out!
I first got into music through choir, and once I got to the advanced choir in my high school we started working with more difficult compositions that utilized more drastic meter and key changes so once I actually got into composing on the computer and saw what other people were doing, I was absolutely shocked at how much unexplored musical territory there was. Especially in more conventional mainstream music, it is pretty crazy. But even the music I worked with in choir was mostly western music, though there were exceptions.
My mentor and friend Ivo Ivanov is going to be putting out an album pretty soon and from what I have heard of it, it will be filled with odd time signatures and meter changes so i am very excited for that. Should be out later next month.

Thank you so much for posting these, @chapelierfou. About time I realized you had released so much wonderful music.

music composed outside 4/4 seems to be more common in the acoustic realm…why is that? the answer might be at the root of what @bwlb is asking in the OT

I have a few overlapping theories

My theory boils down to “80s era Roland sequencers”.