A little thing I’ve tried (some of you might have seen the photos in the //// pictures of our sound-making machines //// thread) is to use an old oil can as a resonator/reverb effect. 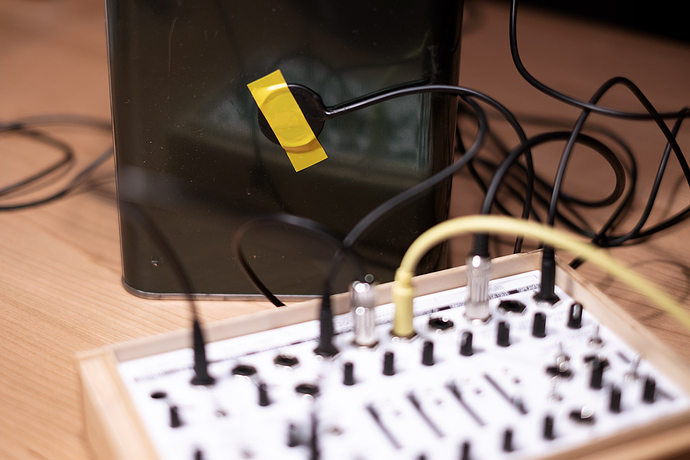 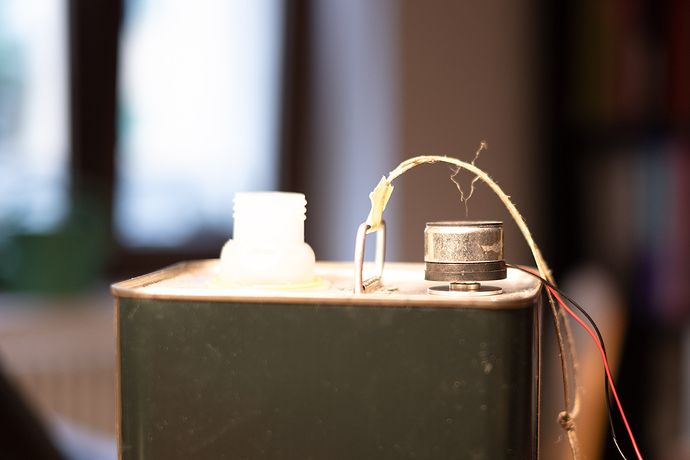 The results so far have been a bit of a mixed bag I have to say.
The mix/exciter placement as shown above didn’t really work well, so I’ve swapped them and it’s already a bit better. I guess the can is too small to do an actual reverb, but it’s nice as a resonating/shaping effect.
It’s very easy to overdrive the whole thing (as you can hear in the recording below) and I have to drive the preamp to the max to get a decent level out of it.

In the recording you always hear the dry sound first and the processed one after that. Except for the “ticks” at the beginning where the dry sound is missing.

Ahhh, I’m so bad at checking responses…I think I was nervous about my performance and didn’t allow the images time to upload

This is the static piece that had an ongoing generative piece playing through the 6 channels for each of the 6 dangling objects. 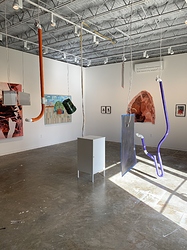 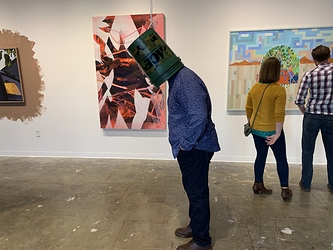 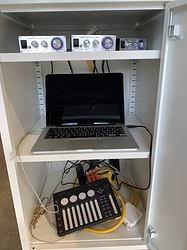 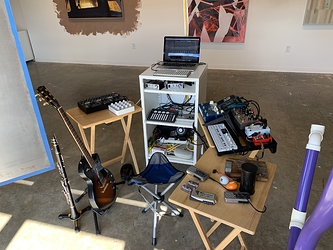 Nice, I think it shows some promise. Did you try having the exciter and the pickup both on the body of the can? Maybe the seam on the end cap is damping the vibration. I want to try a can like this as a resonant hydrophone.

Resonant hydrophone? I can kind of picture what you mean, i think. Is there an example anywhere?

These are smallish ones. I wonder what a large metal drum would sound like.

Have you tried suspending the can in the air? Any time I’ve used this technique with any object, finding a way to suspend it improved the reverberation and sound significantly.

Looks to me like that piece of twine on the handle of the jug must have been for suspension – I was thinking the same thing.

Have you tried suspending the can in the air? Any time I’ve used this technique with any object, finding a way to suspend it improved the reverberation and sound significantly.

I mostly keep it suspended via the handle. It does sound a little bit more reverby, but not a lot more.
Of course less things block the object from vibrating, the better.

I’m curious to try this out myself. I wonder how using different oils/liquids could change the sound, depending on how dense they are. Have you tried any other than olive oil?

I’m looking to expand some of the feedback-y stuff I’ve been doing on the snare and want to explore incorporating some transducers. I initially bought all the tiny ones I could find to mount on a small 3d printed ‘grip’ thing. Similar to what I’ve been using to hold a microphone: 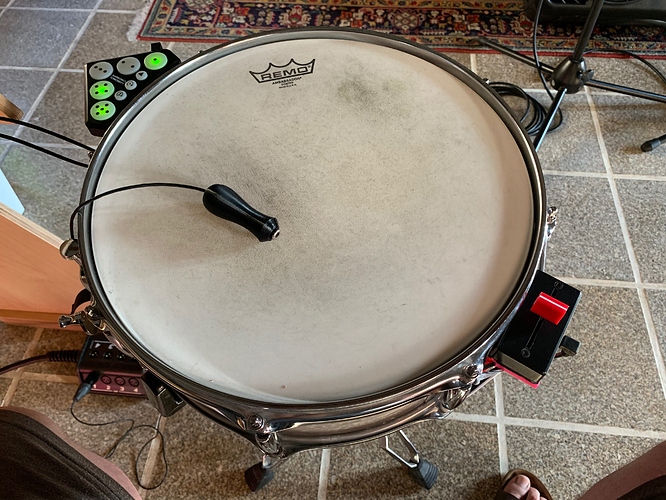 My thinking there is that I can “ride” both the mic and the speaker on the head of the drum. A definite avenue of exploration.

But now that I’ve gotten a CNC machine I’m thinking of also incorporating a larger transducer, but mounted to the body of the drum itself.

In seeing videos from the last c74 expo (specifically Nina Young’s talk), I saw that she used a transducer mounted on the bottom head. I don’t really want to go that route since I want to keep the acoustic sound of the drum in tact. I also saw Alice Eldridge’s feedback cello, which similarly couples a transducer to the instrument, although in Alice’s case it’s a regular loudspeaker.

All of that is to say, that I want to mount a transducer to the body of the drum via a CNC’d wooden mount/frame, and want a full-range option that I can mechanically couple.

I want to avoid adhesives since I may experiment with the wood/mounts/etc…, plus I don’t know how well/strongly adhesive will work here. So that rules out a bunch of the transducers I’ve seen, including the one with “arms” like Nina is using. A bunch of ones with screws/mounts seem to be focused on being used as subs/“thumpers”, so they have shit frequency response.

The best option I’ve seen so far is the Dayton HDN-8, which is a weatherproof full range one: 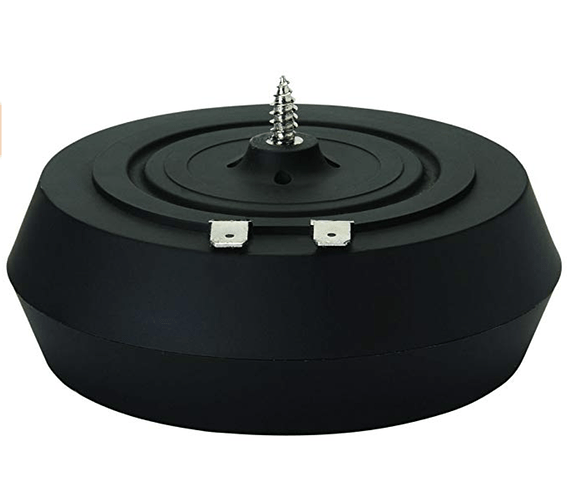 What worries me is the fact that it’s a single course screw that mounts it in place. So that can come loose over time etc…

So all of that is to ask, has anyone come across a solid transducer that’s full-range(ish) that can be mechanically-coupled with a surface via something other than adhesive?

I built my own some years back out of a little discarded 8 ohm speaker unit and a cork wine stopper and a little suitable LM386 amp to drive it, still works like a charm.

If you send it very low tones, you can use it as you would a solenoid as well. I built a little rig for it out of old Meccano pieces and used it to hit individual strings on my zither, muted with felt. This is an example with about 11 tracks.

For a school project some months back I bought some fairly small ready-made ones, they also worked pretty good, but of course didn’t do all that well in the low-end.

Thanks to some ideas and inspiration from this thread, I have finished putting together a hybrid electroacoustic/modular system that allows me to run modular signal through exciters, transducers, solenoids… via a bunch of internally preamps behind an 8hp panel, with inputs for returns and external instruments.

So far, I’ve attached an exciter to an autoharp and have been feeding it Harmonic Oscillator and guitar. It works really well! The HO is a perfect companion, as the strings resonate in sympathy better with basic waveforms, and the HO allows for choosing exactly what harmonics I want to resonate, and being able to animate this.

There is some general ringing of the harp from the vibrations, so to keep it sounding good I tuned it to a big chord by ear.

Here’s a couple of quick demos that I’ve uploaded to Instagram:

Happy to post more demos and some tracks as they come if anyone is interested! Will likely do an album focused on these sounds.

Sorry about that. No idea why it won’t let me imbed the links like normal. I’ve just added the links as hyper links for now. Thanks for flagging it for me!

So recently I’ve been working more with the Dayton Audio coin-type exciters, and they’re really great. I want to mount some of the bigger ones on the underside of a box lid but I’m a little worried about the weight of the exciter on the voice coil – the 5W ones work fine like that but the 10W are pretty hefty. I’m wondering whether I should pick up some of the ones with the feet to keep some of the weight off the coil. Anyone have any thoughts / experience with this?

I agree, they’re great!
I only have experience with the smallest 3W coin exciters (not very useful in my opinion) and the much larger 25W DAEX58FP, which has a mounting plate. I can’t find any documentation showing issues with mounting orientation and my own experience shows no difference. The Dayton guide Exciters Buyers Guide states that the units with “extended mounts” are for better coupling to a radiator and not to support the coil.
The only issue I’ve come across is a great reduction in power when used on steel as it pulls the magnet in and reduces its travel. I was able to work around it by using a 3 inch block of packing styrofoam as a coupler between the exciter and the sheet metal. It transmits the vibration well and holds the exciter far enough away from the steel that it’s not affected.
Anyway…I don’t think it will be a problem in your application. Hope it goes well!

wild, I’d expect that the foam would damp the exciters instead, cool that it works! I’m mounting to wood, not a problem for me.

Thanks for the input, I’ll dive right in and mount the suckers. 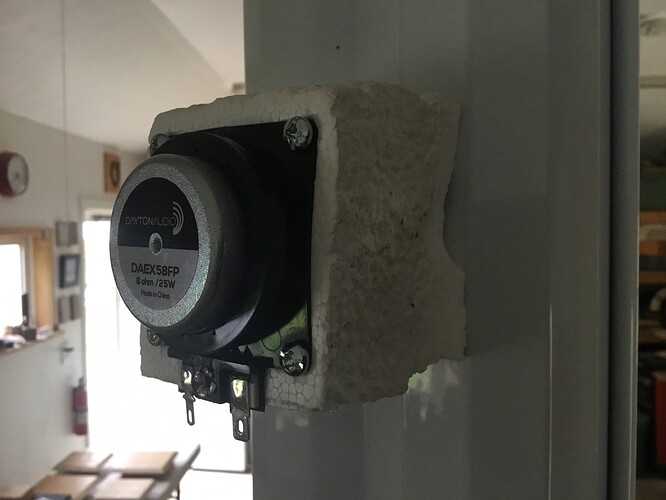 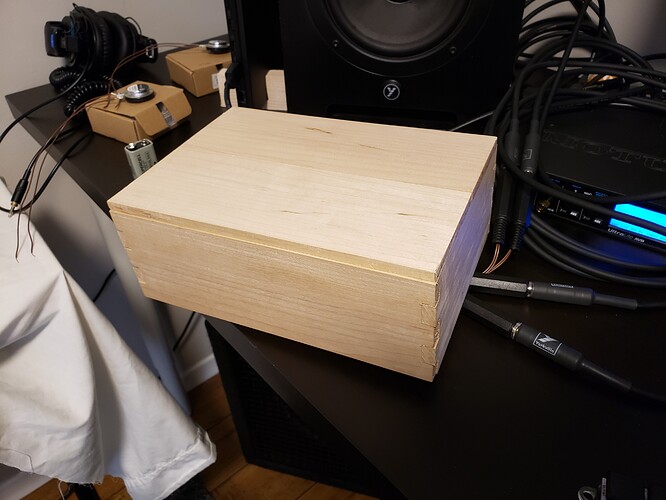 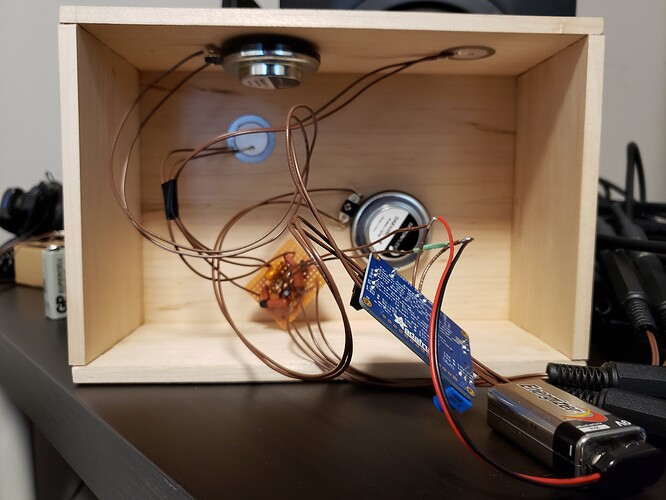 The 10W have such appreciable bass, I’m never going back now!

Are the piezos input or output? Looks like it could be a great feedback rig.

Input – yep, quiet mellow feedback is what I have in mind!