Hello there, i just found out there is no topic about the mighty Trogotronic stuff and was wondering how many Liners have experience with these earsmashing devices.
When i first met Metasonix stuff (probably about ten years ago) i was fascinated by the idea of using tubes in various ways, not only to amplify stuff. But i must admit that their sonic signature is not tuned to my taste (no offense intended of course, this is all very subjective). So i was searching for other manufacturers who incorporated tubes in their design and found out about Trogo.
i was instantly intrigued both by the designs, the sounds and the ideas exposed in the short texts. All the devices appealed to me, both valve and solid state designs, but two things attracted me the most: the m277 dual tube vca in eurorack format and the TR-Valkyrie hotrod synth, an all tube test equipment tone generator totally rebuilt and repurposed in the mad trogo lab to become a noise demideity…

given the high price of the second i started hunting for an m277, but was out of luck finding second hand units and the price for a new one was out of my budget unfortunately. so at the end i gave up, but that always left an itchy feeling of unsatisfied gas lolz…
meanwhile a very good friend borrowed me a great philips gm2308 unit, all tube sine generator, very heavy, beautiful design, this is it: 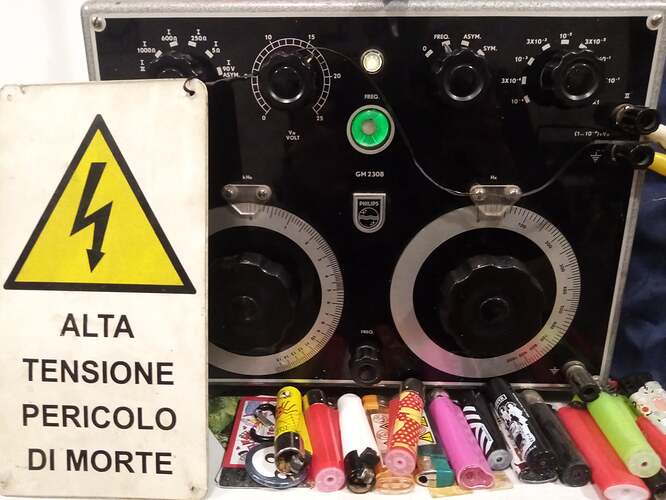 the two knobs design (khz and hz) and the magic eye tube for frequency visualization are two of its strong points, but rest assured this guy is a killer device! it goes from very low frequencies (lfo territory) to 16khz, very very full range. it has two separate outputs with different amplitude controls which can be really useful for saturation of external preamps\pedals\amps…
i use it both on my mixing desk and my all tubes little laney lc15r (15 watts, very nice combo if you ask me, with effects loop and a very handy line output, after the preamp tubes), speaking of which amp i must say it satisfied my tube distortion\amplification needs.
then last week i noticed a TR Valkyrie cv version up for sale on muffwiggler, couldn’t control myself, sold a couple of modules and hit it! it arrived yesterday and here it is in all its rugged glory: 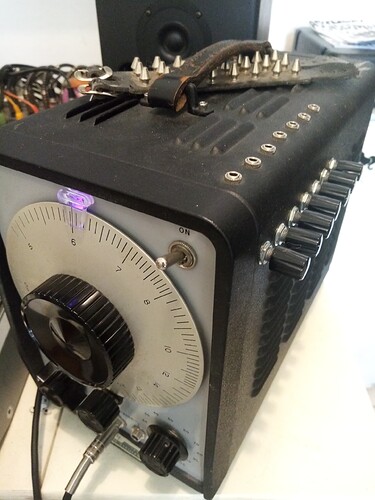 it is not the last iteration (the one with the labeled red panel for the knobs and jacks) but it’s an already cv equipped version!
what to say, it’s a real monster. high gain noise machine with A LOT of spectral richness and nuances. it has 2 different outputs that can be used one at a time or together for wide stereo image, the sound coming out of it depends on which out you use and if you use one at a time or both. the “range” selector dial is repurposed as a routing mangler for the signal flow inside the 4 pentodes, volume control (amplitude) works as level only on the main out, but always affects the signal in some way. the 7 knobs are parameter controls but become attenuators when you patch cv’s in their relative jacks. sonically it is one of the most powerful sound generators i ever put my hands on.
it is, tho, very hard to control. the BIG knob with its relative mechanical fine tuner, is controlling a capacitor which only in some situations really affects the frequency of oscillation, often just being a FSU knob as all the others. but mind: all controls have a very specific purpose, it’s not blind craziness. WT was really kind in answering to my questions and sent me a detailed explaination of all knobs and internal working. fact is: this is not a synth for control freaks or precise sound design, its a lively beast, each parameter interacting with all others for a very organic sound that ranges from near ultrasonic shrieks to microrhythms to huge noise stabs to massive drones to bubbling analog madness.
the trick is to surf each parameter, finding sweet spots that are always on the edge of total utter destruction.

it has an external audio input, you can process external signals, from huge harmonically rich overdrives to full on distortion to audio-modulated noise and drones, it absolutely shines on drum machines, making even the dullest rhythm with the silliest sounds into a huge pounding hammer of doom!
the cv inputs are really good if you have interesting modulation sources (last night i was fiddling with valkyrie and benjolin, they pair exceptionally as you might guess).
the only thing i find a bit hard is having it stay on lower registers, it has a natural tendency to soar high and emit high bansheeVSpteranodon shrieks

the philips gm2308 instead shines on really low bass drones so they will pair exceptionally well!
i think that while it is a device that is geared mostly towards the noise musician, you can conjure up a lot of interesting stuff, especially if you sample it then chop out little pieces of rhythmic stuff and other goodness.
soon i’ll record a new album (the sequel to my William Blake inspired “Orc” album on Elli Records,which was mainly based on er-301 custom digital noise machines) that will feature the mighty Valkyrie in central position!
please share your trogo adventures!

Really great machines, unfortunately my experience with them is limited to repairing and borrowing for a short while a friend’s ABS 666. The designer was super nice + helpful with repair info, to save having to send it UK-USA

Bill actually started me on my modular journey. Simply being an incredibly helpful, knowledgeable fellow and “dummy talking” to me about power supplies was enough to convince me to actually take the plunge.

I don’t have any modules but I do have their 6u case. Probably the best power supply per dollar travel case in the market! Tons of juice on tap, said goodbye to all my problems from underpowered digital modules when I picked it up a few years back and haven’t looked back. It’s deeper than I need for my current selection of modules, and it’s ready for carry in air travel whenever that’s viable again.

i’d love one of their portable cases!!! too bad the customs and shipping costs are a bit prohibitive for me right now!

i had just a brief email exchange but he was very supportive, his explainations of the internal working of the Valkyrie were very fascinating and also his views on what kind of instrument he wants to build and use. i agreed with all of it, given that i spend a lot of time making synths not sound like synths