I tried the more verbose tape names method in the tweaks docs of the norns community and I think I have messed something up in the process. I seem to be getting a supercollider fail message but I cannot determine what the cause is just yet. And it seems to disappear after sleep. Honestly I do not know what makes it pop up - I just know it started after this tweak.

One of the potential symptoms (or maybe it is script specific??):

I can record to tape just fine with the Awake script (and in the tape/ folder will be e.g. 0024 awake 90bpm.wav) but @okyeron MI-resonate script will not save even though it allows me to proceed with a verbose tape name and and hit start and stop. The transport shows it is recording but nothing gets saved.

I have followed the troubleshooting steps in the Norns help docs. Here is what the super collider restart produces: 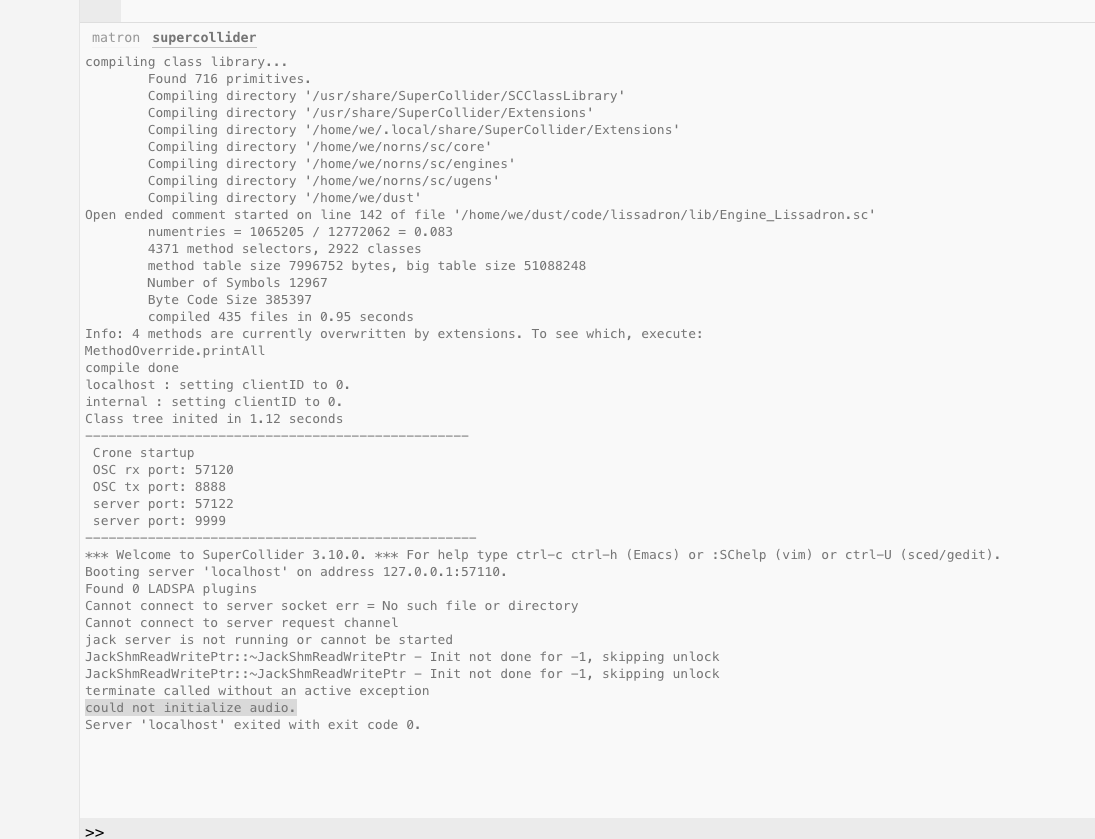 It is totally possible I borked something when using cyberduck. However, since this was one of my first attempts at making a change to Norns, I am not quite sure what I’d be looking for that I did wrong. Anyhow, thought I would put it out there for advice on how to proceed. Thanks yall!

EDIT: it appears the supercollider fail appears after I sftp into Norns via cyberduck and disconnect. Even if I do not modify anything and disconnect, after I restart Norns the error: supercollider fail message appears and then powering on after sleep makes it go away but the not saving to tape issue still persists. Here’s more detail: if I start a recording before I start the MI-resonate script, I get for example: 0027 none 90bpm.wav and the recording is saved! But when it is more verbose, e.g. 0029 mi-eng/resonate-r 90bpm it does not save to tape as described below.

OH, apologies – this was a proof of concept submitted in response to a discord question, which was not meant to be made “official”. i was able to run it fine on my device, but had not done extensive testing. i guess it got bundled up in the wiki on faith, which is very kind, but seems to have caused some trouble for ya.

i have removed it from the wiki + here’s a fresh copy of tape.lua for you to drop back into the same place: tape.lua (7.0 KB). after that, you should be able to run the update fine. please lmk if you run into any further troubles!

Ah - no worries and thanks for dropping that fresh copy. Before seeing your reply. I decided to go ahead and run the latest update assuming that the modification would be resolved. All seemed well until I tried connecting to cyberduck again to see if the verbose modification had been overwritten with the update. Mod was overwritten (I compared it to your copy here). However, now I am getting freezing after disconnect from cyberduck and when I tried restart, it hangs on restart. No supercollider errors now or other error messages. I was also unable to connect to maiden without a hard reset. After hard reset I could connect. I do see several warnings and script errors: 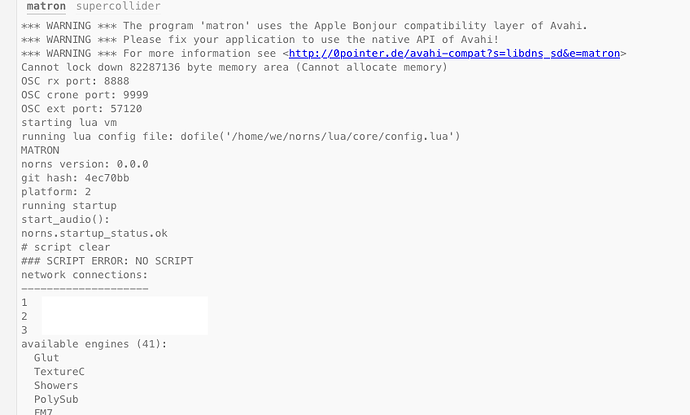 I have everything backed up. Seems I need to do a fresh install (I did this when I first purchased my Norns) and then do the latest update?

all that’s printed there is expected.

honestly, sounds like something went wonky outside of the tape.lua file, so a clean install makes sense. there hasn’t been a new image since December 2020, so just make sure to run UPDATE on it after: help | monome/docs

lmk if you run into any further trouble! apologies for the first-time-hackin’ wonk. hopefully doesn’t discourage future expoloration

lmk if you run into any further trouble! apologies for the first-time-hackin’ wonk. hopefully doesn’t discourage future expoloration

many thanks for the help and if anything else arises after the clean install, I’ll reach out

The error indicates a more fundamental issue with the audio system failing to start up. It could be a borked update, or even hardware or power supply, but seems to me unlikely to be correlated with the tape naming changes or with a particular script / engine. (All engine classes are initialized at SC startup, before this failure.)

Many thanks for this info @zebra . I think I may have mucked something else while modding that tape.lua file while in the filesystem. I performed a clean install and updated yesterday and no wonkiness so far.