I’m looking for a nice compact keyboard to pair with Teletype. Is everyone just using the standard keyboard, or are folks using their own?

We can also turn this into a keyboards thread, if other people who don’t have TT have some strong recommendations.

this fully customizable keyboard has been spotted along a lines member:

you definitely want to make sure the keyboard doesn’t have a built in hub.

maybe check this thread too.

I’m loving playing with teletype, but don’t really like typing in commands on the included keyboard. Has anyone tried a mechanical cherry switch keyboard? Most of the ones I can find locally have backlights etc which I’m not sure will work with TT. Anyone out there have other recommendations for a better feeling keyboard that will work?

there was a little OT chatter about these later in that thread, but from a mostly functional perspective, after someone had luck w/ a logitech wireless usb keyboard i grabbed this and really appreciate it not being tethered to the module.

i would second wasdkeyboards. very well made and customizable. a little pricey though. 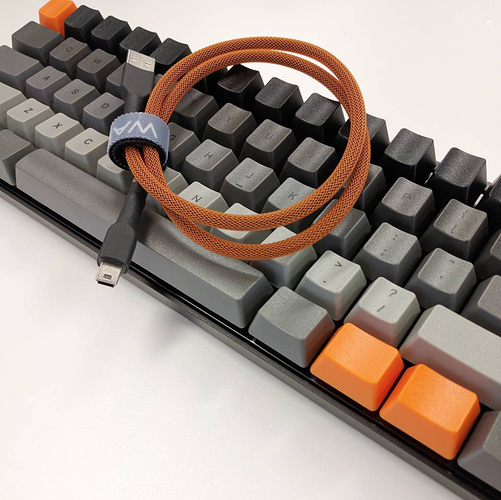 Ortholinear was a revelation for me - completely cleaned up my touch typing technique. Contrary to popular belief, I have found ortholinear to be much better for typing than staggered. I didn’t believe it until I tried it, but it’s true. I wish they would make laptops with ortholinear keyboards.

I use both types of keyboard (it is fairly impossible to avoid staggered keyboards), and I swap between them with very little drama.

Love ortholinear as well, so much better for touch typing! Which one do you have? I found that unless its a split design I strain my wrist because I twist them outwards. So I’ve replaced my Planck with a Lets Split which I looove <3 Next I have to make second one with quiet clickies for the office. Actually need to sell my beautiful but unused Planck now I think of it. Curious for the Preonic and TypeMatrix 2030. 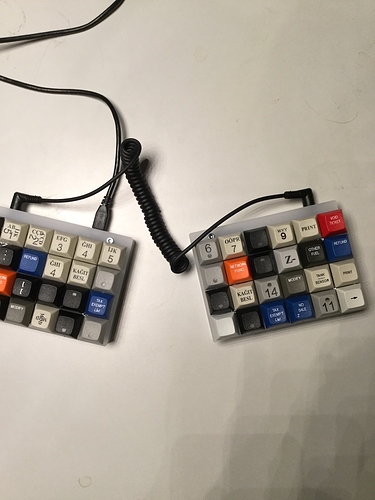 edit: Oh and lets not forget the announced M36-B by ramaworks to match your OP1. Seems totally unusable, but fun

I was looking at these, but the super compact version doesn’t look like it has dedicated arrow keys. Do you find that’s an issue on the Teletype? I use the arrows to move around lines of code quite a bit.

the way this one works is you can use OPTION + IJKL for the arrow keys. which is a little awkward at first but i am used to it now. i may replace those keys with uniquely colored ones to make it a bit easier.

i use the vortex core. i chose that keybord because of space restrictions on my desk and also it nicely matches the monome aesthetic.

same deal as other compact keyboards, you have “layers” of keys that you access by holding one key and pressing another. what’s great about the core and another reason why i chose it is that it has the layers printed on the keycaps themselves, and they are color coded with the two function keys, which you use to access them. so you don’t have to memorize where anything is.

i wouldn’t be able to use a compact keyboard, especially a 40% like the core for any regular typing duties, but for TT it works great. i take my time writing scripts, and it’s not like i need to break any speed typing records. but all the keys you need are there. it takes a little bit of getting used to, but it’s really no problem at all. feels great to type on and is roughly the same size as an arc4. 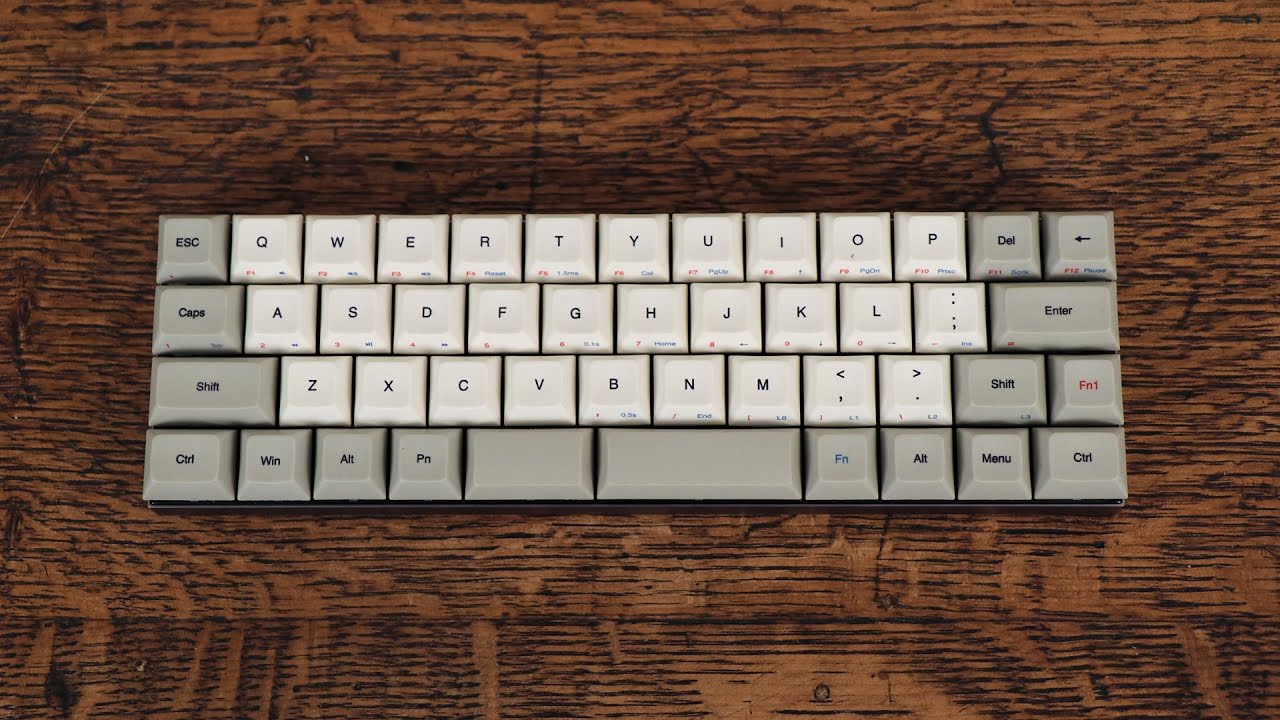 I love the functionality of the Core … but it drives me nuts that there’s a key that says “Win”. Are those standard key caps? If it bugs my ocd could I just replace it?

i don’t know too much about keycaps, but i know the ones on the core are DSA profile. they can be found online but usually you have to buy some kind of set vs just a single key, and like all weird niche things they are usually expensive. i’m also not sure if that exact color grey that vortex uses is available from other sellers.

could definitely be done, but may take some digging to find exactly what you want… would be nice if they just included different OS caps with the keyboard.

I quite like the look of this… is it plain sailing with Teletype - just plug it in and go? Any gotchas / niggles to be aware of before I splash out?

yea - just plug in and type!

a couple things to note that mine does:

those were the only TT specific things that i noticed, and they ended up being things that i was happy to discover so i never read into it. everything else works as expected. 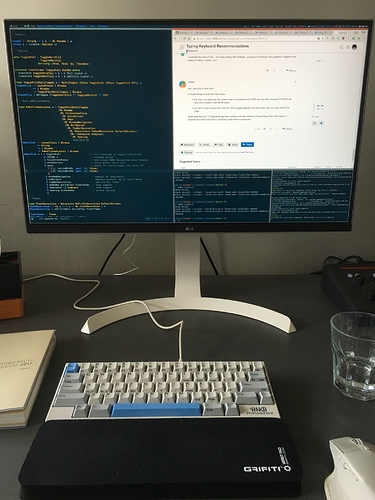 I’m currently rocking an HHKB Professional 2 Type-S (such a daft name…), the layout works really with Linux, and it’s really nice to type on. I like the fact that there is little in the way of accessories to buy, no $$$ key sets, or anything like that. Just the odd coloured key cap or space bar.

I did build a Planck, but never really clicked with it. It’s just sat in a drawer at the moment waiting for me to sell it…

I could never code with a keyboard like that… I use the arrow keys (and also insert/delete/home/end) far too much. And they numpad pretty often too (though this one I could live without if needed).

These things look nice though, I kinda want to like them but I need my arrows

All keys incl arrows are available, its just a matter of switching layers which means you need to hold an additional key. The arrow keys might be hidden under ‘wasd’ or ‘hjkl’ keys. Here’s for example the keymap of the planck, the bottom row contains the layer keys ‘lower’ and ‘raise’ which allow you to go up or down to the symbols, numbers or even music layer

I’m either using something with Vi style keybindings and modes. Or failing that I will fall back to Emacs style key bindings. Neither of which need arrow keys for moving. Arguably it’s better as you don’t need to remove your hands from the home row, especially as the HHKB has the CTRL key in a useful place, it’s also a lot easier to press ALT without a CTRL key next to it.

If you use OSX it’s well worth learning some Emacs bindings as they work in most text fields, you can change caps lock to CTRL to in the keyboard settings too.

In fairness to the HHKB, the arrow keys are really easy to use. But maybe not with modifiers too.

finally received a keyboardio model 1 in the post after a worryingly long kickstarter delay. First impressions of this thing for basic internet use & typing is very positive. Obviously jumping straight from many years typing on a regular square layout is pretty brutal but an hour or so in and I’m basically able to type again. Here’s a picture of the weird clunky thing in all it’s rainbow LED-ed glory. 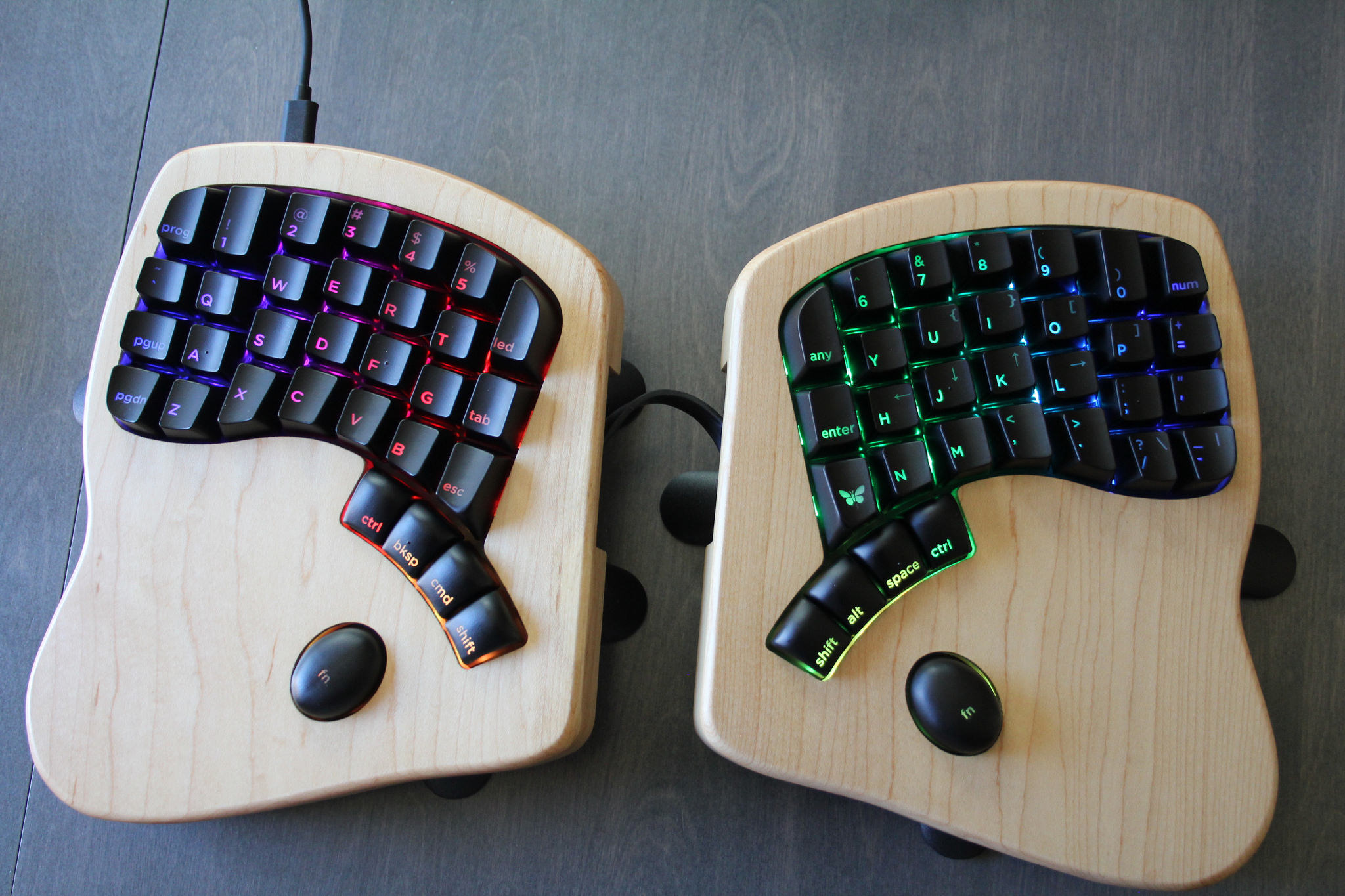 For some people the most weird thing about this keyboard would be the extensive usage of thumb keys for shift, space, ctrl, alt etc. However I’ve been doing something similar for ages with my keyboard layout. Xah Lee’s ‘swap ctrl & alt’ tip is genius but be warned this blog post could be considered a gateway drug for expensive keyboards http://ergoemacs.org/emacs/swap_CapsLock_Ctrl.html .

The first thing I did notice compared to typing on a square mechanical layout is I couldn’t read the text on my screen properly when using a ‘tented’ configuration on the keyboardio. This is because the keyboard actually makes you sit up straight! Yup, as in straight upper back!!! I tilted the screen back 10 degrees & continued the test…

An hour or so later my weak hunched over spine is kind of protesting at being forced to sit straight but slowly getting to grips with the new layout & finally stopped hitting ‘Esc’ instead of ‘B’. First impressions this thing does exactly what it says on the tin - finally a really really well designed keyboard that isn’t constantly trying to ruin your posture.