USB audio interface with loads of line inputs and nothing else

How would you go about simultaneously recording multiple (16-24) tracks over USB without spending a fortune? Everything with ≥20 inputs is very expensive and comes with loads of extra features that need to be paid for, even though they will never be used.

I have no need of pre-amps, pan, compressors, midi, eq, effects, or even a level fader (although that might be nice). I don’t need dedicated stereo channels, sends, or bundled software, just loads of line inputs. A stereo output would be sufficient.

Does such a product exist?

Modular suggestions welcome as I suspect this may be the way forward, although my knowledge of that world is limited.

without spending a fortune?

depends on what a fortune is. On the top of my head, the way to go for minimizing unused features would be an RME Digiface USB and as many 8 channel preamps with ADAT as needed (cheapest being something like the focusrite octopre).

Thanks for your suggestions. Yes I’m more at the Octopre (or Tascam US-16x08 or Alesis Multimix 16) end of the market.

But with all of those you’re paying for preamps and such which I don’t need. I know all these things are massed produced and I’m fighting against economies of scale, but I thought perhaps a similar amount of money might go a bit further if I was just getting literally the minimum amount of hardware to get sound into the computer.

The idea is to record four people playing various things simultaneously rather than soloing each part every time we’ve got something worth recording.

The MOTU 828 mkII is a firewire 400 audio interface with ADAT and 8 balanced analog inputs and outputs. I have one hooked up to a Mac Mini circa 2010 with a firewire 800 => 400 cable. This will definitely not cost you a fortune and will work with macOS and Linux. I believe it’s also possible to chain multiple interfaces which could give you 16+ analog ins/outs. I haven’t tried this tho.

The MOTU 16A mentioned above is exactly what you are describing. It’s not really as cheap as I wish it was.

I have a Scarlett Octopre connected to RME UCX interface and am very happy with it, specifically the quality of RME drivers - a set and forget affair. The Digiface USB looks affordable. Maybe you could attach 2 x Behringer ADA8200 to it. I think Mic pre-s are nice to have, for when you’d want to record anything acoustic. MOTU 24Ai looks nice too.

Yes it looks like Digiface and a few Behringer ADA8200 (or ADA8000) units seems to be the way forward. I can almost certainly get the Behringer units second hand as well, which should help keep the cost down. Thanks.

If you are willing to go down the ADA8200 path, then you may consider a miniDSP USB Streamer if you are truly on the lower end of the budget spectrum. I can’t speak directly about their performance and reliability, but I believe there are some folks here that use them.

FWIW, I’m using an Apollo Twin with an 8200 and it works just fine. The new MOTU Ultralite would be another choice to pair with the 8200 as I believe it now supports ADAT. I also have and use regularly the Ultralite mk3 Hybrid - I wish I had the ADAT capabilities of the new one.

I use a USBstreamer with Expert Sleepers modules and it has always been rock solid, even through a hub.

I’ve never had any reason to pay attention.

worth watching the reviews of Cymatic’s stuff on Youtube. it’s all suspiciously low cost.

Yeah they did probably save some cost here and there. F.ex I found out when using the Utrack24 as a stand alone recorder that you should use a harddrive with its own power supply to not have some noise in a few of the lines, but other than that it has worked really well.

and you need to factor in the cost (and time if DIYing) of the XLR to DB25 snakes.

That USBstreamer looks great. Although if I’m getting three for 24 inputs then the cost is coming close to the Digiface. Nice to know it exists though. With a second hand ADA8000 it probably would probably come to less than £200 for 8 ins (and outs).

bonkers. back when i was looking for a multichannel audio interface, before 2015, anything upwards of 4 outs was ridiculously expensive. this changes things!

I know it’s out of your range, but I thought I’d chime in… I’ve been using the MOTU 16A for around 3 years now and I think it’s great. My whole studio is wired to it through a pair of 48 point patch bays: 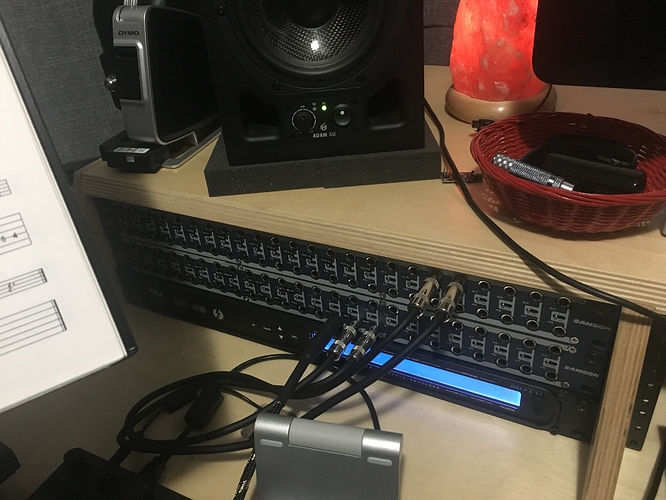