A lot of problems and uncertainly using monomes on various releases of macOS over here, but wanted to say that my monome works well with Apple’s USB-C to USB converter, High Sierra 10.13, and the FTDIUSBSerialDriver_v2_4_2.dmg

I’m not sure if this is necessary or not, but I did create and disable the network interfaces as per this thread

It comes back online after and unplug and replug, which is great (and the main problem in that other thread!)

Thanks, this was helpful for me

That FTDI driver is here, in case anyone else winds up looking for it again: http://www.ftdichip.com/Drivers/VCP.htm

check the setup docs: you shouldn’t use the external ftdi driver on macos >=10.12. the builtin apple ftdi driver is all you need.

I tried also with builtin apple FTDI but doesn’t work. The strange thing is that when I launche de max monome package it says “if you haven’t yet, be sure to install serialosc”.
I installed it several times… 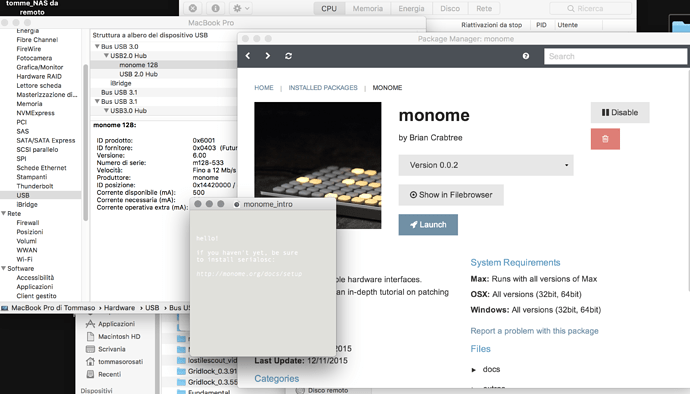 the popup is just a reminder, not some indicator of something not working. 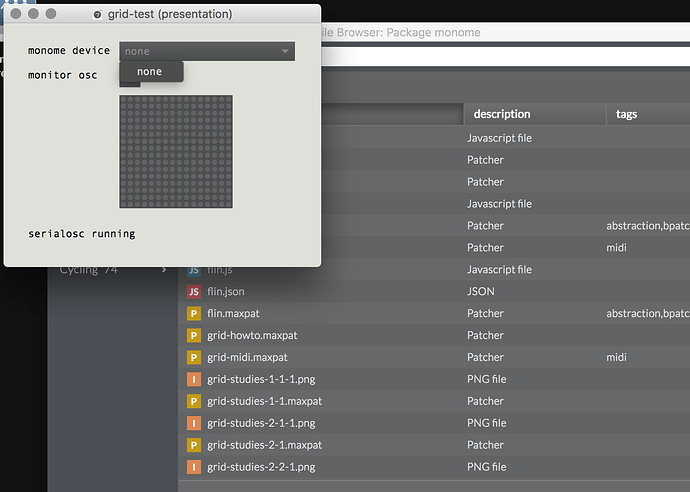 @tomme - with your grid/arc device connected to your MBP what does the output from running the command kextstat -l | grep -i ftdi in the terminal show?

…if that command doesn’t produce at least one line like the following (for the case of the Apple FTDI driver):

…then it is likely that the FTDI driver isn’t getting loaded. I might double check the cables 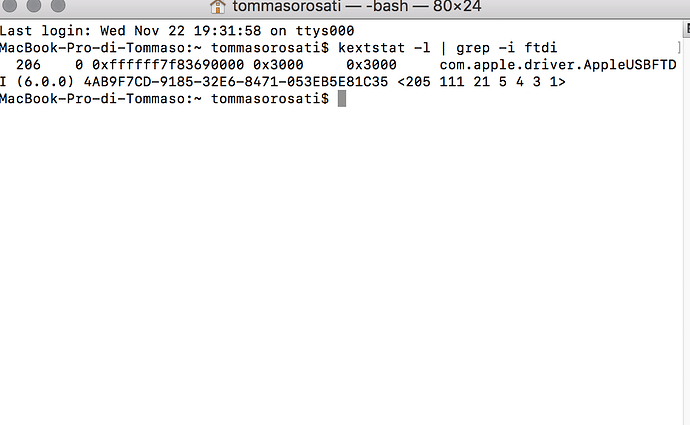 Things definitely didn’t work with the builtin driver on 10.13 for me

I think it’s a serialosc thing, but not sure how to test:

And homebrew installs them here: /usr/local/Cellar/serialosc/1.4/bin
Homebrew version just crashes every time I try to run it though, so… no idea. (segfault 11)

I’ve uninstalled and stopped the pkg installed one and am now fiddling with homebrew, but would love advice. Thanks!

I have now uninstalled and reinstalled both ftdi and serial osc, and installed them in multiple combiantions and each one alone without any results, full ssd sytem fyi, is there any possibility of serialosc being updated? Or should we just roll back, My system wasd working with Sierra but high sierra Monome cannot be seen

this is a clue. there didn’t use to be underscores in the device name, which is required for serialosc detection.

this of course makes no sense that some people have things working fine.

i’ll put together a further test for people to try, in about an hour once i grab an older unit

Not sure if this helps, but here’s what system report gives me: