I think Make Noise Tempi’s deep and idiosyncratic design merits discussion on its use.

How do you use your Tempi? Which techniques have you found most profitable? Which ones do you wish you knew more about?

I’ll start — For me Tempi is a natural candidate to clock my sequencer (Teletype) and delay (W/). I rotate simple clock divisions (1/2, 1/3, 1/4, etc.) via Mod function to generate complex sequences. Things get interesting (perhaps too interesting) when the Mod input (self-patched) is itself modded.

Two areas I haven’t really explored at all are phasing and states. Has anyone had any success sequencing states or creating interesting phased sequences?

In general, does anyone know any cool ratios? Perhaps this is the only question. 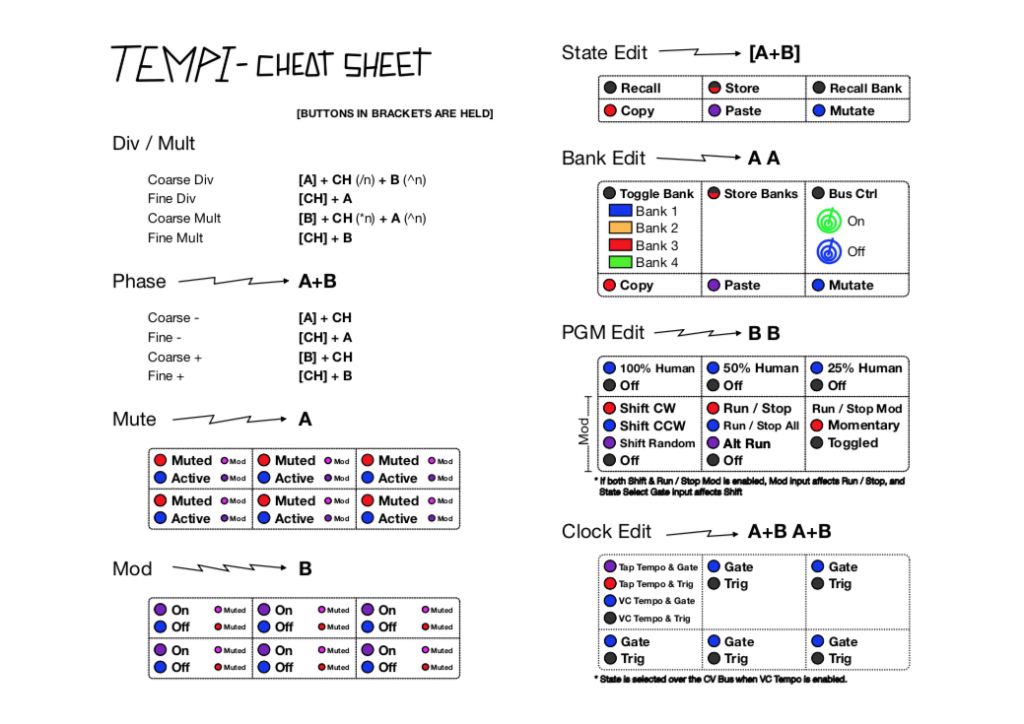 My favorite pre-programmed states are 7 (Fibonacci divisions), 13 (Fibonacci multiplications), 15 (Phase Demonstration), and 16 (Non-Integer Division Demonstration). I often use them with either Tempi’s Ch 6 output or a gate output from another module to trigger the Mod input, which is almost always set to Random shift instead of CW or CCW rotation. I’ve not played too much with State Mutating, setting Human Programming at 50% or 25%, or the Run/Stop / Run/Stop All / Alt Run/Stop Mod settings, but I’d like to learn to use them at some point.

I’ve yet to explore storing and recalling states on Tempi itself, and would ultimately like program 64 individual states in the same way I have with René’s 64 states, and build a long composition out of one following the other.

Also, gonna tag folks like @jamescigler (aka Run/Stop All Mode) and @walker in this thread, since they’ve undoubtedly spend more time with Tempi than anyone else on this forum.

Love my Tempi but the button combos make it challenging to grok. A bigger version with a few more dedicated buttons would be dreamy!

I’m typically happy using it to create unpredictable rhythms for some but usually not all voices in a patch, with that self-modding of the Mod input idea that was mentioned.

Discovered the Mutate function a looong time after adding it to the rack - which I had some fun with but of course now forget how to do.

Also have gotten some interesting note sequencing out of it by modding the Mod, using a mixer to combine several channels’ gates (with varying degrees of attenuation) and quantizing the resulting CV.

Who doth awaken me from my slumber?!

I personally use the Tempi a lot via the “human programming” input - manually tapping the rate I want each output to be. This feels much more natural and musical to me, and often faster as I’m not always sure what the corresponding div/multiplication is to what I hear in my head. ALSO, it’s much easier to set the Phase this way. If you, for example, just tap two quarter notes on the upbeat, you just inverted the phase from another quarter note output. No key combo necessary. Granted, this will take some practice, start with 100% human quantization and try and quickly move towards 50%. 50% isn’t that hard unless you have virtually zero rhythm. 25% gets tricky, but, there’s a lot more happy accidents in there too. Especially if you’re…

Using the MOD input. Ironically, while the mode that bears my name was designed to make it easier to sync to a DAW (or some other MIDI/Clock source), I’ve only ever used it that way when testing the idea and beta testing firmware updates. I do often use it, however, as a way to manually reset and run the clocks. For example, using Pressure Points or some other manual gate into the MOD input. I find having most of the Tempi outputs programmed to multiples more fun, and usually I find it more interesting if Tempi is not chasing some external clock - I’ve set the tempo and I’m just playing along. If having to constantly play the MOD input manually is not your thing, add a Gate sequencer in place of the manual gate. Note that this mode is not that interesting if you self-patch a Tempi output to the mod in.

The Rob AA Lowe mode is also very fun as you are essentially switching outputs on/off with an external gate/clock. This can create a lot of interesting interactions that, on the surface sound like clock divisions, but depending on how you clock the mod input, can become rhythms and not just steady divisions. This is mode IS very interesting if you self patch a Tempi output to the MOD input.

I find I don’t use STATES that often. When I do use them, it’s usually in a live performance context where I know I need to have specific states I need to return to reliably. One where all the channels are muted for example (quick stop), or maybe 2 or more channels are clocked at a steady 4 on the floor for a driving beat. With Rene2 however, having the Rene states locked with the Tempi states is incredibly cool and useful. And MESH / MESH Paste on Tempi is amazing (discussion on MESH probably too out long/out of scope for this thread).

In general though, I would suggest that the best way to explore Tempi is similar to most modules. The two most import key points, imo:

#1 is always the most important. If you’re sitting down to write a hot new track and you want to experiment with some new functionality - that’s a recipe for frustration in my opinion. Or, you end up doing the opposite of #2, you eventually just turn back to what you already know or are comfortable with.

I guess #3 might be “don’t worry if you don’t understand what’s going on”. Sometimes you just need to remember the steps you took to get something interesting so that you can follow those steps again. Over time and repetition, you’ll come to fully understand what’s happening. For example, there’s lots of fun with, say, Tempi clocking Rene2, and using the C gate output to drive the MOD input. But it may not be obvious which controls will have what outcome, you just have to experiment and see what is the most interesting to you.

James, I’m reviving this bc I just got a Tempi and saw your (great) post – I agree that human programming is great for phase stuff, which can be tricky when shifting phase for multiples in particular.

One question: you mentioned the Robert AA Lowe Alt Run/Stop mode and self patching. I enjoy this mode as well but am finding that the Tempi loses its mind if I put it into Alt (purple) mode with momentary (red) on and self patched, say, Ch. 6, I to this.

Am I doing something wrong? What makes this tricky is that if I want to disable Run/Stop live I have to scroll past purple, so have to remind myself to yank the cable or go to toggle mode to ensure I don’t get a freak out.

Bumping this thread back to life. It has been a year since this Tempi thread got some lines love. Any hip new ideas?

Anyone have tips for syncing tempi clock to the system? I have ableton sending clock to my system via a keystep (using the sync out) which i mult to both tempi and PNW. Tempi slips out of sync upon cycling play in the DAW. Is this an issue of using the reset feature in tempi?

Yes, I use a reset from Ableton, an audio file. I’ve found a few difficulties with this, you need to reset to play little before the beat but it may just be various latencies in my set up.

Gotcha, I love Tempi aside from its finicky sync. I’ll try this out!

finally don’t need the manual at all and i’m always blown away at how deep it can be. one thing i’ve been doing more of lately is using the gate input to cycle through states. can program some cool rhythmic accel/deaccels (or both at once on different channels) and shifting polyrhythms that can be phased in various ways. usually i’ll have channel 1 x1 or channel 2 /4 into the gate input (which can be switched with the mod input

). also have been using more of the banks as sandboxes to mutate in various ways while having bank A as a home base if things get too out of hand

still need to get more into the run stop modes.

can program some cool rhythmic accel/deaccels (or both at once on different channels) and shifting polyrhythms that can be phased in various ways.

This is the kind of awesomeness that I can sense in the module but have yet to unlock. My case has phonogene and Morphagene as main sound sources with lots of modulation option. Clock is both tempi and PNW. Struggling to find a place for tempi when the most fruitful path so far has been tempo synced modulation and LFOs from PNW. Need to go back and watch @walker video on tape and microsound expansion.

something else i’ve thought about but haven’t had the time to play around with, is using each channel as a trigger sequencer with a gate advance. using the 4 banks of 16 states and phase divisions, you could program a 6 channel version of steve reich’s ‘clapping music’, or ‘music for pieces of wood’, etc.

in this song i explored the phasing capabilities of Tempi.
all six outputs have the same tempo but are gradually out of phase with each other, generating the (to my ears) very organic percussion patterns you can hear:

Great track, what were you using for the percussion sounds?

it’s been a while but if i’m not mistaken it was simple oscillators and noises (analog with sapèl and digital with zorlon cannon) into pinged lopassgates, some effects and a feedback patch made (if i recall correctly) with clouds in oliverb mode (parasite alternative feedback) and a doepfer spring reverb with some stuff in the feedback loop…

Very cool. They really have an acoustic timpani feel to them.

Linking another modular forum here… this is a really cool way to look at Tempi. Shifting through states, not as a set of multiple Channels, necessarily, but as a gate sequencer or coin toss logic type module.

Woah! This is a BIG mood. Well done.

it’s hard to believe that organic percussive pattern comes from 6 clocks with the very same tempo, with just their phases nudged against each other.