Yes, you should be able to. I’ve run headless on my Linux machine using m8c , and it works quite well. I haven’t tried it with a controller as of yet, but this is what the readme says:

Still requires a teensy though right?

Yeah, you would need to somehow emulate the teensy or port the code otherwise, which to my knowledge is not something anyone has done and is likely no trivial matter. As far as my understanding goes, the PC client just allows for basic I/O, treating the PC as a dummy to accept video and audio as well as sending basic keyboard and controller commands. (to the exclusion of MIDI, I believe, which needs to be hardwired to the teensy)

At $400 for the base model, but with a serious GPU and CPU and 16GB of RAM, the price doesn’t “make sense” in the current PC marketplace - Valve is almost surely selling the base model at a loss to get plenty of people talking and adopting it and selling more Steam games

Yeah, I think this is at least part of the appeal. It might not strike us as an obvious slam dunk because its not top of the line pro level gear, but for what its offering it does seem to be a unique deal.

A portable 16gb ram x86 machine going for $400 is pretty good. It doesn’t seem like there’s a similar offer out there right now. However, a big emphasis is on the portable aspect. There’s a lot of people who just don’t need the portability at the end of the day. It looks like a really fun gadget, and I’m attracted to it- but I just don’t need a portable form factor like that right now.

Curious to see why people want it, how they envision themselves using it, and how they actually use it once its in their hands for a few months.

There may be other appeals besides price to performance ratios though. How fast does this thing boot up? Do you have to type in a password? An “instant on” machine certainly has DAW appeal.

But what I’m not getting is this already exist in a better form factor and that’s any Windows/Linux tablet.

There is no powerful windows tablet at this price range

This thing looks incredible for gaming, but I would hate using it for music production.
There’s been a stigma surrounding using laptops for portable music production for as long as I can remember, and I think that stigma needs to disappear. If you like to produce music with a DAW (I know I do), I would embrace the full DAW experience and all the usability that a computer offers.
I spent a long time looking by for the ultimate portable rig that I could easily transition to live performance, and throughout my search, I would always dismissed my readily-available laptop. And yet I have never found a better sequencer or sampler.

For 680€ (the price of the decent storage version) you get a Surface Pro that’s way enough for music making. You don’t get the fancy GPU/Visual 60fps on 720p games but you don’t need that for music.

For this price I can have both : music and gaming with the steam deck, that’s the point.

In which case I wonder what the advantage over a laptop would be…
Also, the actual real-time performance for audio would have to be tested first.

i was waiting for a thread about the steam deck, but it looks like i missed it!

this device is pretty awesome from the marketing–it hits several of the qualities i’d want in a portable linux music-making machine:

as the application for this device is to play AAA games at 30fps, there’s also a large possibility for tightly integrated audio-visual applications.

In which case I wonder what the advantage over a laptop would be…
Also, the actual real-time performance for audio would have to be tested first.

comparing this to a laptop is strange to me–there are plenty of devices in the $400-700 price range that are way more immediately comparable (as far as compute power, application, and size goes):

as for “realtime” audio performance–at least for the c&g/monome devices’ software stacks, you could likely run multiple instances of each stack on the steam deck.

Maybe slightly off topic but in response to the iPad comments, the iPad Air 4 is powerful and still compact, and has some great apps for looping and granular and decent if not amazing built-in mics.

So yeah, as suspected, the Steam Deck is not just for gaming. It’s also a great portable machine for exploring modular synthesis and sound design. The first photo is VCV Rack 2 being used as a plugin inside Bitwig Studio. The second photo is Bitwig Studio running its own modular environment, the Grid. I’m particularly excited about VCV Rack, since it’s a CPU and GPU demanding application that has performed poorly on my Macbook and non-gaming Windows laptops over the years. But it seems to run without breaking a sweat on the Deck. I get the full-fat, no-compromises versions of my 2 favorite, most deepest music production environments on the go, in a handheld machine with no tweaks or optimizations necessary.

In terms of usability - yes, it’s small and screen real estate is limited, but both VCV and Bitwig are pretty flexible in resizing and window positioning. I don’t favor the touchscreen as a way to navigate or manipulate knobs - it’s not nearly precise enough (at least until I get a decent stylus, then we’ll see). It’s a great way to play those virtual pads, though, which also serve up 3 dimensions of per-note expression - gate, X axis, and Y axis. For everything else, the trackpads are actually really great as mouse substitutes. They’re precise and simple to use. They almost feel as good as my Apple Magic Trackpad, and are actually a better experience all around than the built-in trackpad I have on my Lenovo Yoga laptop. The haptics on them feel nice, too.

Worth pointing out, too, that I’m running both of these apps via Steam, which allows a deep level of customizability for the on-board controls per application, in real time while using the app. Even assigning buttons to key combinations and macros, if you want them. So it doesn’t feel like I’m stuck using subpar controls, but rather I can make them fit my needs as I go along.

Overall maybe my favorite way to use music software now, and will probably singlehandedly re-stoke my interest in VCV and designing instruments with Bitwig’s Grid. The only portable music making experience that’s superior is the M8 Tracker, but that’s a specialized piece of music gear in a whole different ballpark, with a very different set of goals and features.

How do you use these apps on steamos ? (Installation process)

What about the fan ? I’ve read that it’s always on and quite noisy

Yeah, I’ve been considering this too. It’ll run Windows, so that seems pretty cool.

All I want is a TINY BFD! I’ve got a Pi4, which just needs a small screen, and I have a small portable BFD, but an all in one unit with way more power sounds very tempting.

These tiny but powerful devices are going to be coming thick and fast this year I think. Steamdeck will have many competitors.

How do you use these apps on steamos ? (Installation process)

SteamOS boots by default into a console-like environment to play games, but you can load up “desktop mode”, which brings you to an Arch Linux desktop environment which has KDE Plasma as a graphical frontend. There’s an app called Discover installed by default that lets you one-click install a variety of popular apps as “flatpaks”. This makes installation painless and doesn’t require any command line shenanigans.

What about the fan ? I’ve read that it’s always on and quite noisy

This is one of the many complaints I’ve read about that just sort of baffle me. Yes, there’s fans working to cool the system; and yes, you can hear them. But given the serious horsepower of this device and the small footprint, I’m glad the fans are clearly doing what they need to. It’s not overbearing by any means. It’s not obtrusive to me since I’m always using headphones when the device is on. And it’s not particularly obtrusive to others, seemingly, since so far my family around me haven’t even mentioned it or appeared to notice.

I use mixcraft as daw. Do you think I can install it with my vst ?

I haven’t heard of Mixcraft, but I see that it’s Windows only. So on the Steam Deck you would be running it via a compatibility layer such as Proton, which Valve uses to run Windows games/apps on Linux. Proton works astonishingly well on the Steam Deck - for most Windows software, if you’re willing to try out different flavors (Proton Experimental, GE Proton, Proton 7.0, Proton 6.3, etc.) you’re more likely than not to find something that works.

ProtonDB is a website where users report testing out various software and whether it’s working for them or not, and which Proton version they tried. Here’s the page for Mixcraft. It’s rated Gold, meaning “runs perfectly after tweaks”, and sure enough, there are a couple user reports saying that it works after a few tweaks they’ve detailed. So that sounds promising. It might not work as well as a native Linux program such as Bitwig, but it should still work well enough for your needs.

Regarding VSTs, I haven’t tried installing any (other than VCV, which works as expected), but I’ve read a report from another Steam Deck user that most of their Windows VST plugins are working just fine, again using a compatibility layer like Proton.

« Running mixcraft with my vst » ?

A bit tedious for me to walk through, but the process has been written about elsewhere extensively.

This Steam Deck guide should give plenty of info.

Some other sites that are useful and provide step-by-step guides:
Deck Central
Gaming On Linux
Searching the Steam Deck subreddit also proves useful more often than not.

Running Win 11, and an external GPU 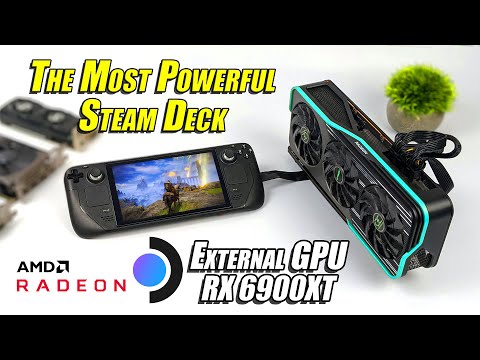 Mylar’s got one now. Excited to see what he does with it. 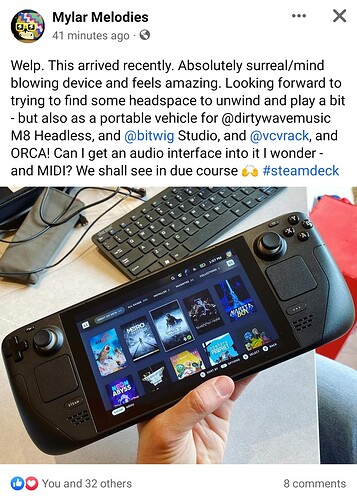 Aside from that: the value proposition of this thing is even more emphasized for me with recent gear announcements. It’s 40% of the price of a Syntakt, and 1/3 the price of a TX-6. Now both of those look like killer pieces of gear for their own reasons and I’m not trying to compare on a feature-by-feature basis - these are all fundamentally different animals from one another - but the sheer amount of stuff this thing can do, and do well, is pretty notable. It’s not my favorite music-making device. But it IS my favorite PC and gaming console I’ve ever owned, and it also is a pretty nice handheld music machine.

My M8 Tracker is currently en route to Tim for repairs, so I’m especially going to be keen on properly making some finished tracks with the Deck for the next couple weeks at least. Should be interesting to see how it’s put to the test.