Hot on the heels of Portal comes a new, but very different, Gotharman instrument music release from your’s truly

This time my goal was to take the Gotharman SpazeDrum Blue drum synth, Little deFormer 3 granular workstation and anAmoNo X modular synth and make music using only samples from my trusty Luna Concert Ukulele. So even kick drums and snares were assembled and deformed from those sounds, taking advantage of the crazy Gotharman effects and the plentiful modulation possibilities available in those machines. Only one non-Ukulele sample has slipped into the album. I’m sure it’s easy to spot

Apart from the “Modular Minute” tracks #3 and #9, which were created on the anAmoNo X modular synth, all tracks started out as internally-sequenced SpazeDrum drum synth performances (often also including some melodic content, like “bass lines”), to which I then added sounds from the Little deFormer 3, either sequenced internally and synced to the SpazeDrum recording, or played live with a MIDI keyboard on top. Track #5 was made with the SpazeDruzm Blue only.

Let me know if you have any questions about the workflow or the devices. Thanks for listening 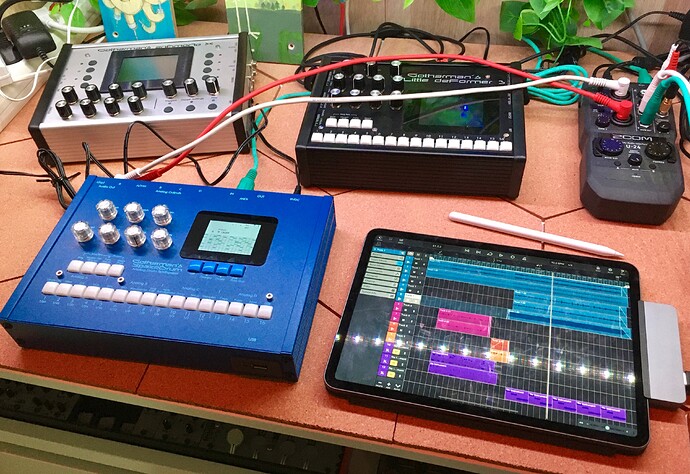 My iPad Pro is running the Steinberg Cubasis 3 DAW, connected to my Zoom U-24 USB Audio/MIDI Interface. This sends MIDI clock to the SpazeDrum (and the other devices when needed) while recording its stereo audio in sync. I can also send stereo audio out of the interface separately from the main audio out, to process it and record it back into the DAW. I did that on a few tracks, when I felt that some parts needed more deFormer effects

In Cubasis 3 I usually just added a little bit of EQ and compression from the WAVES plugins at the end then, without going overboard to keep all of that Gotharman charm (of course).

I really like using the iPad Pro with the pencil to do my mixing and mastering nowadays. It’s so powerful for my requirements with that hardware and all the available plugins, while being also couch-friendly too, which I always appreciate. Haven’t bought the FabFilter plugin suite yet, but I see it in my future

Got some new Bandcamp codes! Take one, if you like and redeem it here:
https://nightmachines.bandcamp.com/yum