Visualization tutorial on the Aleph

Handheld camera and poor sound, but somehow sweet. Here the Aleph’s framerate is mixed with the camera’s own framerate, which makes some annoying visual aliasing but nevermind: it looks better for real. I simply used the SCREEN object with very simple tricks, and it really is fun to do - I might include it in a future scene, as it changes my way of playing somehow. I can also make a tutorial if anybody is interested, I know this is not useful soundwise (I coupled one osc within Waves to one of the ACCUMs in there but that’s it for now)…
Still, it really is fun to play with!

Damn I forgot the video… Here it is: https://youtu.be/J8JNIzfiJ08 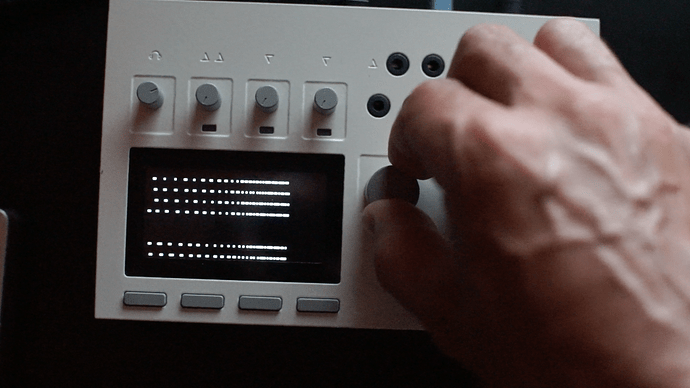 very cool!
i don’t have the Aleph, but definitely see the beauty of it!
well done.

please tell me how
or give hints

Thanks guys, I’ll make a video explaining how to do it: there is actually quite a lot of fun to have there.

Hello everybody, so here is a tutorial for the use of the screen - enjoy, and comment if you feel like it!
You’ll notice there is an aliasing problem between my camera and the Aleph’s screen, can’t find how to get rid of it. Also the end of the tutorial is somehow missing (no battery left) but you’ll get the idea. I might redo it if I can get better quality!

Does anybody know how to get rid of this crazy aliasing by the way? Although it is of course not like that in real life, through the camera there are these black bars crossing the screen constantly… I mean, it clearly makes this type of video impossible to watch, and it really annoys me. I tried with 24, 25 and 30 fps and didn’t get any better result, with a full-frame dslr camera. Then I made videos before on which this problem didn’t seem to appear, and I have no clue about why.

Hope this helps anyway, I have added other types of lfos, some limits to the lfos controlled by a grid, some changes in the visual direction, a freeze button, etc. It is possible to go way further, by making Waves react in a modal way (by deciding which notes are authorized, somehow). It of course will take some space in any scene, but I found it very inspiring to play with, as it leads to other ways of playing. I’ll try very soon with a modular.

i have to gush over how fantastic this tutorial is!
(the only step i didnt follow is the freeze-frame toggle using presets)

i will definitely be using this in music and for my own therapy because it is, in fact, a game

sincerest thanks for sharing this and inspiring me!

this is a truly wonderful visual synth
it feels like weaving 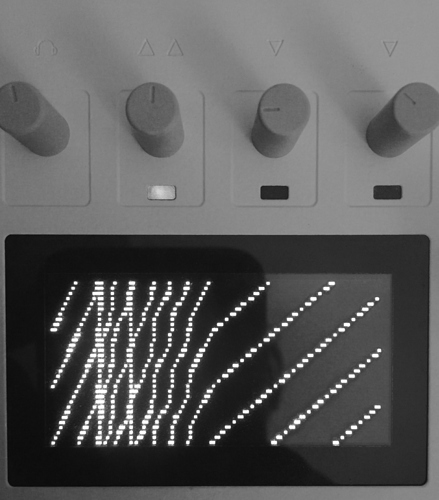 Indeed, the tutorial was in fact longer but my camera stopped working… I’ll include some extra elements some day, or maybe a full scene. Think of adding jitter to the lines, make rules for how the drawing reacts when it meets a corner or another part of itself, and then think of how to make this sound. Glad you got to use it, and thanks for your feedback. 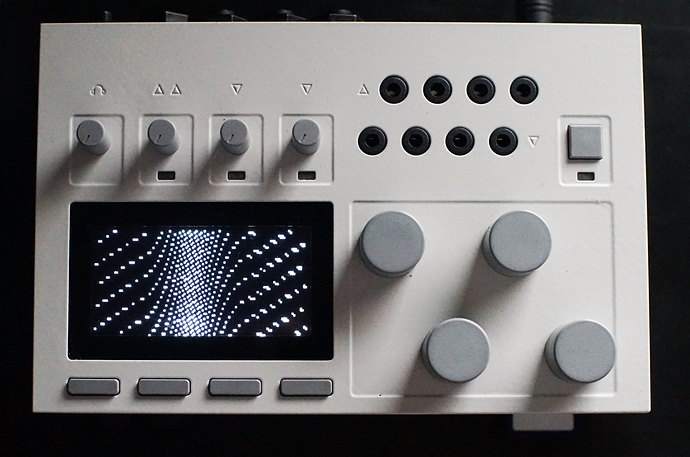 Indeed. Same as the X and Y location for BIGNUM, for instance. A quick solution is to use a preset linked to a button, or a LIST2 with the values 0 and 1. Remember, sending just 1 isn’t enough, for some reason: you have to send 0 and then 1. So a Switch without toggle sending 0 when you press, and 1 once you release, will work. I usually associate it with some other action, or as a combination of switches (I tend to use the values 1, 2, 4 and 8 for each switch, add them and get 16 presets directly accessible this way). Also, yesterday I added the level of brightness of the pixels in the scene, and it looks great - random or defined by the Y position, for instance. That can also represent one extra parameter!

at some point you have to do a video on setting up those 16 presets! (…or i’ll recheck the text tutorials)

surprisingly, after clearing the printed numbers on the initial press, any subsequent toggling freezes the screen and “saves” the image with no overwrites

after testing i might map this to one FS for perfectly timed, hands-free pausing

here is an example of such a frozen aleph bar 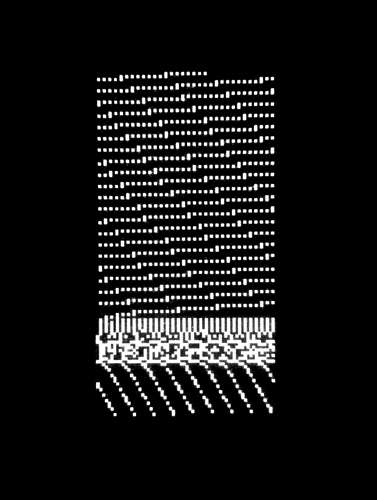 also i’ve nicknamed the scene, and all its derivations, loom

Ha great - and loom it is, then!
I am working on a more advanced version, and will tell about it later on.

Yes you stopped the SCREEN function, so it freezes at least until you send a PRESET, a BIGNUM or whatever else I guess. Then it’ll disappear and won’t come back until you enable it again. I did the same by stopping the METRO, but it freezes the sound at the same time - unlike your case I presume. 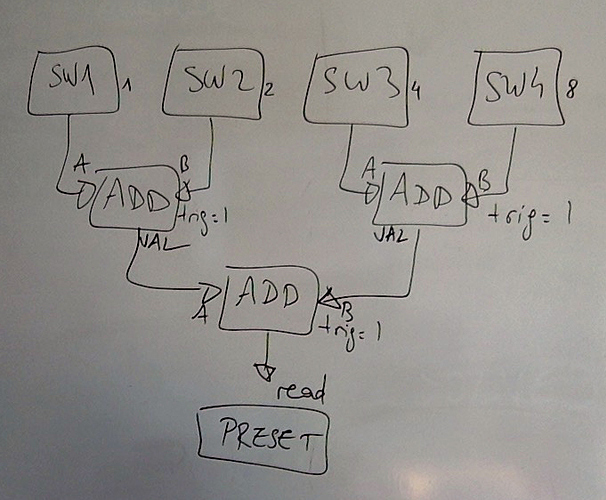 Then this is the preset system I was talking about, directly inspired by the way the 4 lower bars of the STEP objects are working on the grid. Basically it’s a binary-to-decimal system, no switch sends preset 0 and all switches send preset 15. Now if ever you get problems in there - for instance you want to get to preset 3 by pressing SW1 + SW2, but it first launches preset 1 and then 2 because you didn’t press them simultaneously (which depending on your scene can be a problem or not) - there are a workaround or two: for instance you can add a footswitch with a value of 16, toggle=0. This could send PRESET 16, which will momentarily remove the connection between this diagram and the PRESET/read object on the bottom. PRESET 0 restores that connection. So you’ll press the pedal, make any combination, hold it and lift the pedal - then only the preset is sent. Just need to get used to it, which should come fast, but this way you won’t have any problem during a performance. Oh and you can as well use the step object and use the 4 lower bars of your grid to step sequence your 16 presets

I do love presets on the Aleph, to me they are by far the coolest feature and allow things I couldn’t possibly do otherwise.

Anyway I’ll make a basic Loom scene very soon then, for other people to enjoy and start some development. @glia, you are welcome to bring some ideas in! 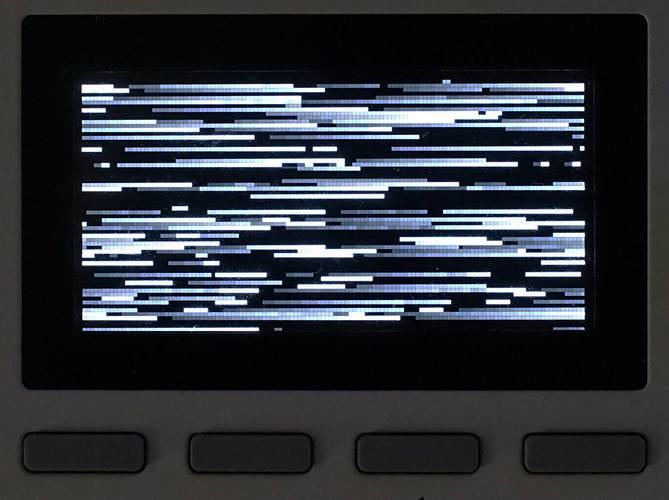 Loom is a great name for this!
What an awesome, fun project.
I love when things are used not for what they were intended for (and I mean this in the best possible way), even though, I can easily imagine a kind of visualization that actually reveals certain aspects of the composition that might otherwise go unnoticed. Or visualizations that in the live preformance inspire new directions or structural ideas…
In any case: I wonder what craziness might be possible on the Teletype!?.. it’s probably a similar OLED screen between the two.

this is soon cool!!!
any chance of a written tute?

Can be done, sure, if it makes sense. Then again, @tehn, does it? I mean, I’ll do it gladly but only if it brings something to what already exists, otherwise I suppose making a proper scene will be more useful.