An evening of electronic music curated by Wavetable, a new inclusive community of audio and visual artists from Edinburgh and beyond.

J Simon van der Walt is a creative musician based in Glasgow. As tedthetrumpet he makes code-based music using (primarily) SuperCollider in conjunction with a range of other softwares and hardwares, as well as (occasionally) visuals in Hydra and Punctual. He plays and improvises on trumpet, Javanese gamelan, and other instruments, and (sometimes) ‘composes’ score-based music. In his day job he is Head of Taught Postgraduate Programmes in Music at the Royal Conservatoire of Glasgow; at night he dreams of reconstructing the career of his (fictional) alter ego Edward ‘Teddy’ Edwards, unsung hero of British light music electronica.

Ben has self-released a modest selection of ambient & minimal works on streaming platforms and also composes for mixed media.

Ben’s love of modular synthesis, language and open-source tech naturally drew him towards livecoding playgrounds of the Monome Teletype, Hundred Rabbits’ Orca, and visual platform Hydra.xyz— which has become a staple of Wavetable nights.

Looking forward to it…

Really, really going to try to make it through this time 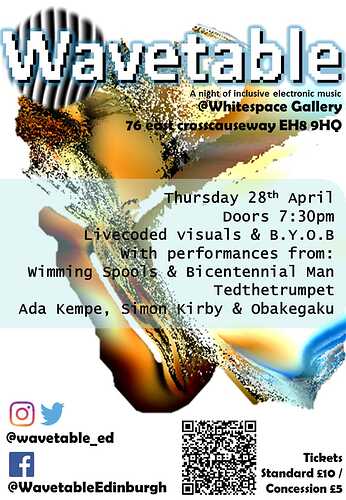 Vids from last night are up now on the wavetable Youtube, big thanks to @expertsleepers for the video/audio sync wizadry.

Share your videos with friends, family, and the world