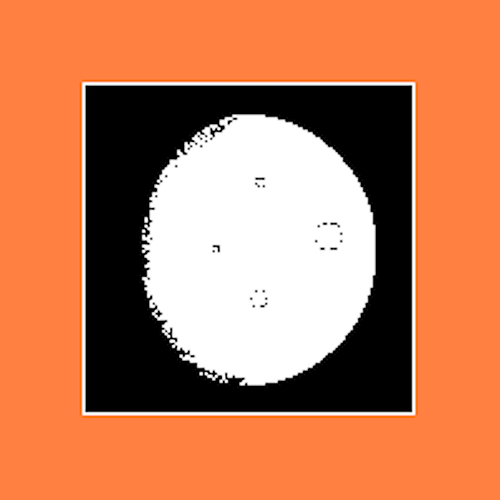 The waxing gibbous
Tugging at the sea
at me
The gibbon moon
The orangutan moon
an aping orb in the waves
a gaping globe
Craving the tickly yellow whispers
The blistering redolent skim
of the sea.
For what it’s worth,
I shed my skin and take to the
Earth.

On the occasion of tonight’s quarter moon, as it begins to wax into gibbous, I present my latest ~mapwave~ release. A story of the shedding and donning of skins, the cycles of celestial and human bodies, the turning of time of faces of seasons, and the slow, peeling revelation of the shadowside. Maybe something like Heaney’s “utter, self-revealing double-take of feeling”; maybe something different.

It was recorded in a single session with a small eurorack modular, bastl thyme digital tape machine, and a cup of coffee [as depicted below]; recorded directly to norns tape, with some additional compression and EQ applied in the box. Every individual track was live-coded from a blank teletype scene, Just Friends provided the voices with a brief DFAM cameo on seals. Mastering consultation provided by Placebo Mastering Gmbh (thank you @tyleretters). Questions/ critiques/ discussion of any aspect is all very welcome 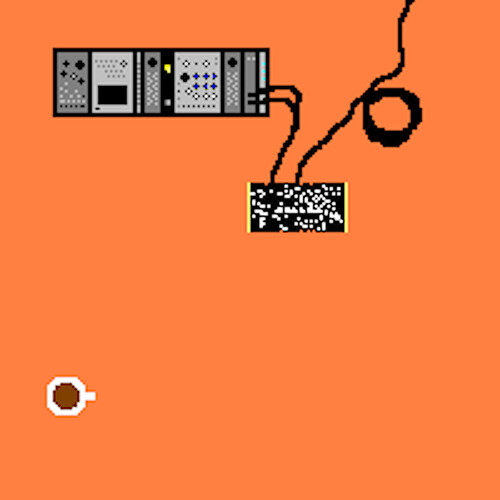 Saturday 10/16’s flash crash will feature a performance in this style with a similar set-up, so if you’re curious about the process that may be of interest

i think this is eminently nice.
subdued, textural, a hovering venn diagram of the melancholic, ephemeral, and gritted teeth.
i’m inspired.

an absolutely triumphant release. emotive use of timbre in space.

when i first listened i felt it was something deeply personal. the track titles offered clues. but the full poem took some of the clues away.

@renegog can you share again about the mid/side technique you used? still trying to wrap my head around that one

What am I missing?

Your selection of modules is always intriguing

can you share again about the mid/side technique you used?

yea ! so i patched the just friends through nearness to get a nice spread of the voices, then wielded dual cold macs for m/s encoding + decoding. CM 1 also acted as a volume control on the mids, while CM 2 was volume for the sides. The mids go through the mini drive while the sides go through erbe-verb. I did a few things that I think messed up the mid-side decoding because somehow voices ended up kind of swimming instead of going back to their L/R location — firstly I think I had erbeverb on full wet for all of these tracks, which meant there was no dry signal to add/subtract from the sides lol. Then I also had the first cold mac patched as a noise source (that’s right, while simultaneously encoding the mid/side and being the volume control for mids… what a great module). Turns out noise sources don’t make the quietest VCAs

anyways the noise does some weird stereo phasey stuff too I think, despite being mono.

@eblomquist no w/ — thyme is doing all the looping here — I think you’re just missing nearness, mini drive, erbe-verb, and thats a u-zeus at the end making it all go brrrr

Really enjoyed this, thank you very much for sharing. Love the range of sounds that you love coaxed out of that system. There’s this forward momentum in these songs that I can’t quite place — really wonderful use of rhythms and contrast? Also a fan of the noises and jumpiness of some of the cuts. The opening is just brilliant.

never thought of it as “decoding” - that is so cool

“unsealed” could go for an hour, so good

had the first cold mac patched as a noise source

Would love to hear about this patch. Fantastic release!

it’s from cold mac ideas — basically you patch the CREASE output into the SURVEY input and monitor the MAC output, then you can dial in noise using the knob (usually around 9oclock and 3oclock). It might be the case that you need an older version of cold mac — this patch only works on one of my two cold macs and it happens to be the older one — or it may vary from unit to unit, I’m not sure.

I was also sending my L and R audio signals from nearness in to FADE and OFFSET to extract mid and side signals, then sending the mid through the OR input. Listening to MAC out, I could dial in noise using the knob, but the knob was also affecting the overall volume of the mids. There are certain moments where you cannot hear audible noise but you can hear jumps in the volume of the Just Friends voice, which I believe are the glitches of the noise patch (even when not dialed to make audible noise) affecting the volume… I’m not sure about this. Now I want to do experiments to see if you can get a sub-audio random out using the noise patch, to see if that is what was happening… I also have no idea how the other things I was using the cold mac for may have affected the noise patch, but it definitely behaved differently than using it as only a noise source.

Thanks for the DL code! 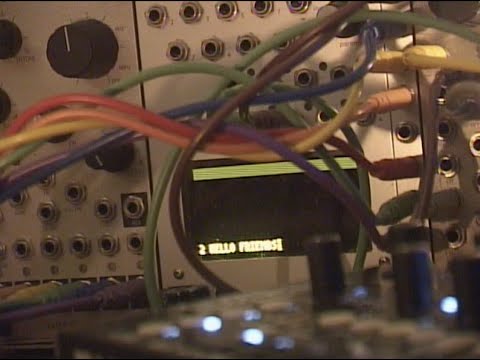 the video of my flash crash performance from yesterday, which shows the same patch that I used for this entire album. The only major difference is that I played the last voicemail i received from my grandma, about a year ago, shortly before she passed. She was my moms-mom and in preparing for this flash crash set, I was thinking about the silly sweetness of that birthday message, and about how I don’t have any recordings of my moms voice — who also passed around this time of year, 7 years ago now. Looping my grandma’s voice through thyme was one of the things that inspired me to make this album — although I ultimately decided to save the voicemail for the FC performance.

@Jet the process of making this was approximately 2 hours on a saturday afternoon. I was supposed to be flash crash practicing but it suddenly felt like i had a lot to say so i pulled out norns and hit record. Tracks 1& 2 are actually seamless, i simply chopped them directly at the moment where i pressed the “half-speed” on Thyme. (I also reloaded the scene in teletype so nothing carried over from the previous track). “seals” is the most different, because I incorporated DFAM (though the high gain input on mini-drive) which I was clocking from teletype. “unsealed”, “redolent”, and “skin” were also all recorded together (reloading teletype at transitions, or during the track), and I think the transitions are mostly pretty close to being seamless/as recorded — although here there was a little bit of finagling to make the song lengths perfect

but the transitions are fairly true to how they were recorded. Also everything was recorded in what ended up being the final album order.

Oh yeah I have tried this one a while ago but I will give it another run. I love the extra patching you’ve done too

this has been a really satisfying record, thank you.

absolutely charmed that u got something from it

Couldn’t help but think of the monkey chilling in the hot spring in the movie Baraka while listening to this! Beautiful soundscapes

I’m just in love with this work.
It would have been wonderful to have a cassette

Gorgeous record. Thank you so much for sharing it with us.

still enjoying this one a lot, kudos