This will be a short post to kick off what I hope will become a very long thread.

Lines has an abundant share of visual talent in addition to all the amazing aural wizardry that goes on around here. I’m interested in looking for ways for us to collaborate. I love participating in the Disquiet Junto, LCRP, network jams, and live streams, and I’m yearning for a community driven approach to regular prompts for visual art that encourage a similar kind of collaboration.

I think one reason this hasn’t already occurred has to do with historical perception of music as a communal activity and fine art as a solo process. But given the ease with which we can digitize and share over networks our creative visual work, I don’t think we need to continue to think of visual arts in such an isolating and singular manner.

Before I get any more specific about the idea, I thought I’d open it up for suggestions. What kind of prompts might we suggest that would bring our visually creative minds together? I’d encourage us to look to Disquiet Junto as a model, and consider prompts that can be accomplished over one or more weekends, don’t require uncommon tools or media, and it would be good to try for prompts that are accessible in terms of technique, knowledge, and experience. (A master may have a more appealing result than a beginner, but the beginner’s attempt is no less satisfying because of that fact).

What do you think? How would you approach it?

Tagging @disquiet because I bet he will have some thoughts on the subject.

I’m aware there are some existing communities doing things like this, but I’m especially curious to find out what lines can do here.

This is definitely an interesting concept. I’d say that there exist a lot of artistic prompt sources so making sure it’s a very different take would be good. In particular the focus could be on encouraging news ways of thinking about, what, why and how we create (as well as occasional left field inspiration): the junto is a great model for this. I suppose you’d want to be flexible about media but perhaps some simple constraints would be helpful, like one “official submission” per prompt and that the submission be either an image or a video of <30s (or similar); I say this as it’s much easier to consume and comment (and such engagement seems key to the process) if the individual entries are concise. Anyway, I look forward to seeing where this gets taken. A mix of highly prescriptive and highly open ended prompts seems important too.

I’d definitely suggest looking to the instructions and games of the Fluxus and Oulipo communities for inspiration. Tons of exercises in those literatures that either originate as visual art or that can be ported to art. A coffee cup stain project, à la John Cage, would be nice to include.

It’s worth noting that while the Junto is itself a community, all the projects are for the musicians to do alone. I think that same format could work for a visual community.

I know friends on places like DeviantArt have taken on challenges to draw each other, or to combine two characters, or to draw a character in the style of another. I think there are a lot of lessons to draw (so to speak) from fan fiction communities, as well.

all the projects are for the musicians to do alone.

I disagree! There are many projects that involve using other musician’s material as source material, and we all participate in commenting on each other’s work and discussing the process that created it.

But yes, we are “alone” together, in that we are each inhabiting our own spaces as we create a community around the sonic arts. “Alone together”, is, I think, a pretty apt description of our times. I want to find out what happens when you bring it to the visual realm.

Thank you so much for all the inspiration! I will dig deeper into the folks you’ve mentioned.

@youngest_brother was talking about some collaborative art they were doing a while back in the leaving records discord where they would pass a piece of paper back and forth. The output from that was pretty incredible. Figured I’d tag them to see if they had any ideas about this project

Yes! I was such a huge fan back in the day.

Looking forward to seeing where this goes.I wish I was better at visual art myself. Having seen the work of others on Lines across various art & photography threads, I’d love to see how people interpreted creative prompts in the spirit of the Junto etc.

Not much of a visual artist, but this sounds like fun.

Digital collage would be accessible to most.

A couple prompt parameters that spring to mind:

Some years ago I did have kind of a collaborative art “band”, a trio that would meet a few times a week to work on shared drawings - we’d each have a sheet of paper to start, make some abstract marks to start, pass in one direction and build off eachother’s work until we collectively agreed they were done.

We called ourselves the “Golden Source Power Three” and collected some of those drawings in a risograph zine: 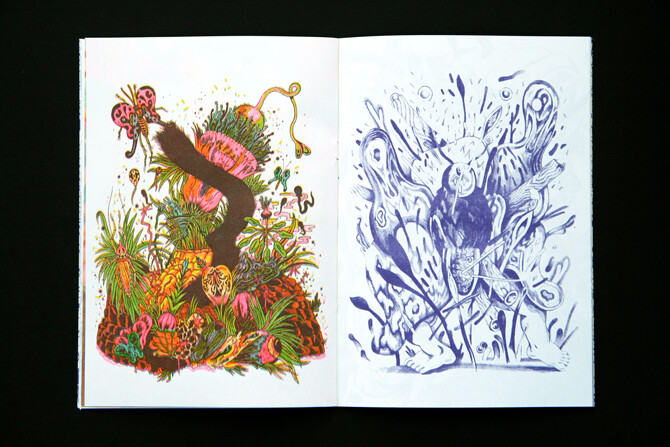 One of the artists got involved in animation and went his own way a bit and the other, Michael Olivo and I ended up making a full graphic novel together.

I wonder if little pods of rotating file-trading could result in something. Visual collaboration is tricky but when there’s a shared vision and chemistry it can be really special.

I’ve been meaning to try this: https://aggie.io/ - kind of like an updated version of the Okekai Boards of olde where people would just pile on drawings on the same canvas at the same time

Sounds like a lovely idea, if the collaboration ends up being open for video art I’d be very interest to take part in this.

@youngest_brother that looks beautiful, is there more imagery from the riso book online anywhere?

Thanks! It’s out of print now, but I have a bit of documentation on a now-unlisted page from my portfolio website: BOOKS/COMICS — Niv Bavarsky

What kind of prompts might we suggest that would bring our visually creative minds together?

…i got some suggestions if yer lookin!

…to keep things open-ended enough for translation in the widest-range of environs…
these are some examps, each separate ideas for projects/prompts, but they could be recombined, etc. and we could all add to a list or someone could lead from a list of suggestions or howev ya like:
-play with some kind of shift in perspective
-you are sitting on a cloud, what does the world look like?
-this week’s project is a collab: “grab a partner and square dance!” (collaborate with someone(or many) on anything involving ‘squares’… this week’s project will be remixed in next week’s…)
-create the interface for a virtual-reality game played by aliens(whatever that means to you… hardware… software… nebulous…)
-the composer, John Bischoff, is the son of painter, Elmer Bischoff, find any work you’d like by each(one work by each), and imagine any form of recombination between the two

i’d suggest a couple general ‘rules’ (which would not need to be ‘rules’ persay, more like ‘pirates code’ in that they’re “just guideliness really”

):
-the prompt be open to interpretation(wordings like ‘whatever that means’ seem very encouraging to me

)
-the prompt be open to translation into a still or video(this last one leaves it open to visual artists of all kinds, video and stills, and would also leave it open to musicians as well: because they’re free to create a still and put music to it for a video if they’d like

other than that, if it’s an actual collab, then that could just be part of the rules ongoing, or you could leave it open everytime, or as disquiet does, you could specify sometimes whenev(probably good idea to borrow(steal

) some of the disquiet guidelines, such as those for setting rights to ‘creative commons’, etc.)… and i wonder if there could be some version of an aggregated playlist(of visual thingamabobz…)…meh just a thought, not important, can also just be each thread started here on Lines is enough

All of these guidelines are great. As a video artist, I would really like to see things left open in terms of timing and format. After all, music isn’t limited to 30s, right?

Thanks everyone for all the fantastic ideas!

I haven’t forgotten about this (it’s been rolling over in the back of my mind ever since) but I do have another question for you all. Is anyone aware of a Discourse plugin or other open source software that will enable the creation of a grid of thumbnails from community contributors? Each thumbnail would lead to a forum post where a contributor will have added as much imagery/audio files/text as they like. Please exist?

I also updated the title of the thread to make it a bit more accurate. 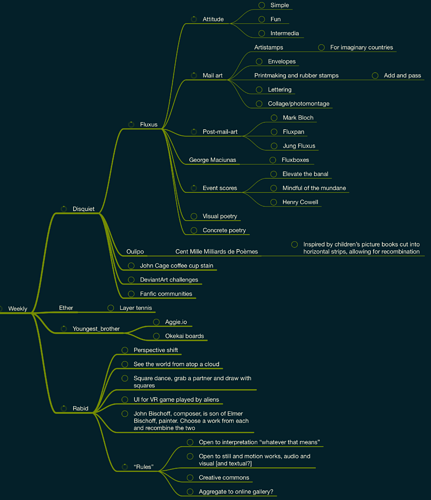 I’ve been following this thread with interest:
https://llllllll.co/t/youtube-instagram-soundcloud-alternatives/43636?u=jasonw22

@NoraCodes do you feel that one of the distributed publishing networks mentioned (or not) in that thread could be a good way to create a community destination for group multimedia sharing around a weekly theme/prompt? Or would I be better off thinking in terms of creating something bespoke to this purpose?

Personally, I would say that the Fediverse, specifically Mastodon, is a wonderful choice for this if people are otherwise interested in using it; I share a ton of music on my personal Mastodon account, the player it provides is decent, etc. The one disadvantage is that, like Twitter, you can’t edit posts; but honestly I’d be really happy to join a Mastodon community with a feel like the Lines community. In fact, @neauoire already has one, at https://merveilles.town, though that project is tangential to this community’s focus in music.

I would not currently recommend Matrix for a musical community as its clients do not have good support for audio media.

Thanks for the insight!

@NoraCodes would you mind expanding a bit in the italicized “if” there, with regard to mastodon? What sort of friction are you anticipating?

It’s just another service to sign up for, maintain an account on, check, and get notifications from. Maybe that’s something others are more willing to do but I generally am averse to doing that.