I’m posting this here, as simonvanderveldt asked me about this sequencer in another thread and I didnt want to divert the other thread.

This is a great and versatile sequencer, its also pretty intuitive to use and have just scored a Launchpad mini to pair with it - anyone else using one?

(Ps if anyone builds one, I think it’s worth adding a supervisor ic to ensure it boots up reliably - mine would only boot about 30% of the time - the rest of the time it needed power cycling. After adding the supervisor, I havent had a failed boot. It’s trivial to add one as well…)

Great sequencer, i build two. Not using the launchpad though.
@forestcaver i never had this issue? Power supply type maybe?

Yes - definitely power supply issue. A couple of my psus were ok. But the Performer seems very sensitive to the slew rate of the power on rise. Quite a lot of people have had similar issues.
On a lightly loaded PSU3, PSU2 and DIY linear I had lots of problems. I tried all the firmware hacks I could think of eg Brown out Reset levels etc but could never get it 100% reliable. (I spent quite a bit of time hacking around at a low level). So I just added the supervisor chip - which worked perfectly - not had a failed boot since - dunno how easy it is to see these piccies though: 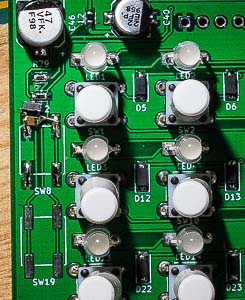 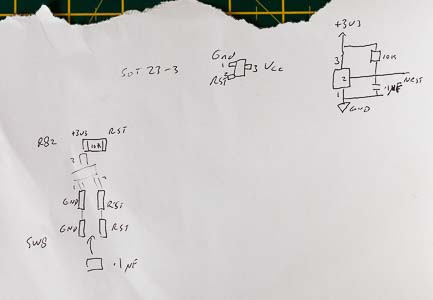 Great timing! I’m just about to order parts. The transistor is just any old NPN? Any trouble soldering the button switch after adding these components? (I am also having trouble locating SW08 on the schematic for some reason

No - it’s a mic803 (supervisor) - pick whatever hold time and voltage you like (that is appropriate) eg I used a 2.6v threshold and a 1100ms hold time as I had one spare (but you’d probably be fine with Vth <3.08v and you may as well go for a long hold time like 1100 ms as personally an extra second on boot up doesnt bother me

). The idea is that the supervisor holds the mcu in reset until the voltage passes a threshold and then for a specified period of time.

I soldered it slightly raised off the soldermask in case there was any deficient mask to avoid shorts to gnd. It’s like a tripod with a cutoff resistor leg… The cap is an 0805 100nf which fits perfectly across the legs of the mic803.

I didnt need sw8 as I use jtag for programming (you only really need those two tact switches if you use ftdi). SW8 will likely be near the stm32 on the schematic… SW8 was just handy for me as it had easy access to the pullup resistor and the NRST, +3V3 and GND lines.

If you want the moouser part number, I’m pretty sure it was this one - https://www.mouser.co.uk/ProductDetail/Microchip-Technology-Micrel/MIC803-26D4VM3-TR?qs=Y3Q3JoKAO1TOJ8JoTmavJw==

Ah! Ok great, thanks for the explanation- this also reminds me, this’ll be my first non-teensy or Pi digital builld and need to do some research on how to program this sucker!

Ah! Ok great, thanks for the explanation- this also reminds me, this’ll be my first non-teensy or Pi digital builld and need to do some research on how to program this sucker!

You may (or may not !) find my blog useful (???) - have a look in modular->diy_modules, modular->tools and modular->notes

It’s a great sequencer! I’ve been using it since last summer I think, and though I also got a hermod a few months ago, which is currently sitting right next to it, I keep coming back to the performer, and will be removing the hermod soon.

I made a few stabs at demoing some of it at the end of this video - sorry you’ve to wade through some crap before it starts. https://youtu.be/uTVE36UgAvI?t=360 (I was hoping to embed this, but can’t figure out how)

And forestcaver’s fix is a really elegant one, for a problem that might not happen to some/most people. For instance, in my Make noise shared system case, I never have the power on problem, but in my large cabinet at home I typically have to start the system twice to get the performer to come on. Before he came up with his solution I had already found this - the WMD Soft Start module - https://wmdevices.com/collections/modular-accessories/products/soft-start-module - which also fixes it.

Blockquote It’s a great sequencer! I’ve been using it since last summer I think, and though I also got a hermod a few months ago, which is currently sitting right next to it, I keep coming back to the performer, and will be removing the hermod soon.

Hey there, I know this is an old thread, but could you elaborate on why you ultimately chose the Performer over the Hermod? Was it the features, ease of use, screen size…? I’m trying to chose between the two and can’t decide. I do mostly atmospheric/ambient sounds, so the generative capabilities on both are very appealing.

It’s been quite a while, and my memories are perhaps a bit hazy on some of the details. They’re both powerhouse sequencers, with some overlaps of capabilities, and I think many people would be happy with either one. And it’s possible that the software running the hermod has changed since my experience with it. I got started with the performer when it first came out - I built one about as soon as it became available publicly. And got fairly familiar with using it quickly. When the Hermod came to my attention, it at first seemed like a shinier, more capable sequencer, and in some ways, it is. They’re both fairly menu-divey - while you can do much of your basic sequence editing in one window for instance, you’ll still need to dive out into other windows to fine tune things or change some settings. That’s not an issue with either of these - it’s just part of the playing field. There were two notable differences that were perhaps what made the difference for me - per step ratcheting and glide/portamento - these are easy to do with performer, but weren’t possible with the hermod (although they may have fixed this since then).

Gotcha. Thanks for the info! I suppose some degree of menu diving is to be expected-- I’m looking to potentially replace the sequencer on an Analog 4 mkII for my Euro set up, which is already quite menu intensive. The biggest things that the Performer seems to have over the Hermod (for me) is the per-step gate probability, the odd but intriguing note range (again, per step), and the conditional trigs. But it seems like there’s work arounds for most if not all of those things. Hermod might be the winner in the end just because of the smaller foot print.

Thanks again for the insight!

i dont have one of these, but heidi is one of the smartest ppl i kno and this seems like a super neat trick 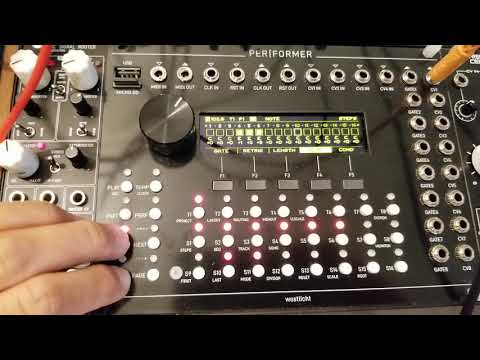