What about: an audio mangling monome module

The monome eurorack modules have got tons of options for sequencing and clock stuff, all in a stable, it-just-works format that should be useful and stable for years to come. The modules took the often wild-wild-west world of monome max patching and baked that thought process into hardware, albeit hackable hardware.

What would a dedicated monome audio mangler look like? Partyvan meets phonogene? Something totally unprecedented?

It would work right out of the box, it would use the monome, and it might even be teletype remote enabled.

there was some discussion in the er-301 thread.

been thinking about it, you could just write a firmware that would allow the advantage of using grids/arcs to control other modules like phonogene via cv. so you could have some firmware running on white whale, for instance, that would allow you to record/play/slice using a grid by outputting cvs specifically tailored for the phonogene cv inputs. unfortunately in phonogene case specifically it’s not possible since you can’t use the gate inputs to trigger recording / clearing the buffer, if i recall correctly.

and in any case it wouldn’t be as flexible and dependable as a direct control. so yeah, it would have to be a dedicated sound processing module that would allow you to connect a grid or an arc directly (kinda like aleph in a module…) or add i2c support to an existing sampling module.

quoting chris randall / audio damage from this thread in regards to i2c support:

I spoke to Brian about that at Machines In Music, and then when I got back I talked to the engineers about it. It is feasible. As to whether we’ll do it is another matter. I’m not opposed to Teletype integration (as a Teletype user myself) but opening it up for “hackers” is very low on the Scale Of Things Chris Finds Interesting. It’s an edge case that requires huge support and internal allowances, and honestly, my time is better spent making the thing musical.

hopefully at some point there will be modules that will provide i2c integration… in the meantime i’m curious how folks that have sampling modules integrate them with the trilogy/ansible/teletype!

All digital Mutable Instruments modules have a serial port on the back, it’s the same FTDI pinout that everyone (inc. Monome) use. Here is the back of Clouds: 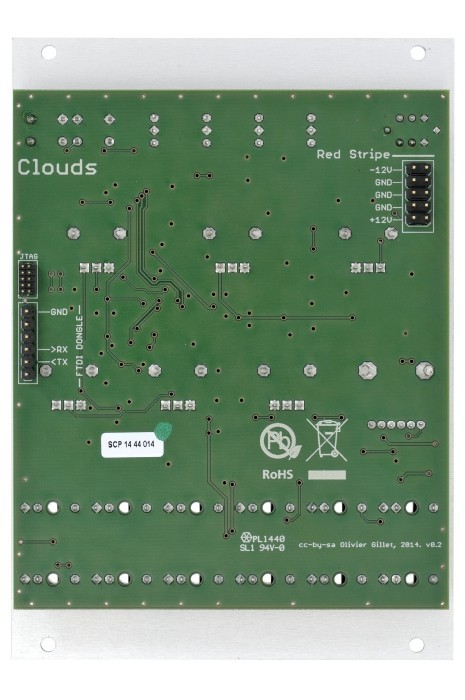 Given that the modules are all open source, somebody with enough free time, could create an I2C to serial gateway with some off the shelf hardware (teensy?, something dedicated) and modify the firmware to accept some control via the serial port.

(Caveats include, I2C to serial being too slow, serial baud rates too slow, MI modules not having enough spare CPU to deal with incoming serial, your mental wellbeing)

i’ve been messing around with using earthsea with both clouds and the mungo g0 and it works great just through a combination of patching and using the shape memories. i can throw down one figure to freeze a loop and another to scrub the loop or effect other parameters. with the slew control on earthsea you can either move smoothly from setting to setting or jump to a setting with no slew. then you can patch the 1v/oct output of earthsea into the pitch of clouds and it opens up to become something pretty beautiful.
it is a very expressive way of using the grid as a looping interface.
now with the addition of arc/ansible… holy shit!

i for one would LOVE to see a sampler/looper/mangler/MLR module from monome but in the meantime this is the best we’ve got in eurorack. with having the er-301 and the audio damage sampler on the horizon i feel like things are going to get pretty interesting.