What are you doing with your Linnstrument?

Does he mean easy in firmware or as a user?

He means in firmware.

Thanks, as always, for the replies!

I don’t use velocity, just pressure, and also generally don’t use envelopes either except occasionally to add a release stage for some ringing.

Awesome. I’ve heard other people say they don’t need envelopes and that’s a great endorsement. Thanks!

Thus far I haven’t missed having more than 7 bits of pressure resolution.

He means in firmware.

OK. Cool. Thanks for the confirmation.

@jasonw22: any experience playing a Linnstrument? In the absence of one to demo, I’m collecting as many anecdotes as I can.

Unfortunately, no. I’m very very tempted to buy one. The only thing preventing me from pulling the trigger is this:

I can wait on the Linnstrument, they’ll make more. But it’s very rare to find a Continuum at that price…

EDIT: But I think I’ve got to let the Continuum go. I bought a guitar about a month ago and will be taking a classical guitar class at the local community college. That’s enough practice and expense for a while.

Oh man. Yeah, I saw that. You taking the plunge?

No. Just edited the post. Gonna stick with my new guitar and give the bank account some rest.

For anyone: I’m interested in specifically slow expressions/modulations (e.g., glacial pitch bends and very gradual modulation of parameters like filter cut-off or FM index) and the demos I’ve heard of X and Y bends have been pretty quick.

I believe this boils down to technique. You can achieve very slow and control pitch bends and parameter mods on the Linnstrument. Aftertouch gives almost as much control as some of the very good keyboards controllers. But, to achieve the precision you seem to be after will take practice and control - but is doable.

You might also want to look into the Continuum.

I believe this boils down to technique. You can achieve very slow and control pitch bends and parameter mods on the Linnstrument. Aftertouch gives almost as much control as some of the very good keyboards controllers. But, to achieve the precision you seem to be after will take practice and control - but is doable.

Doable with some study is exactly what I was hoping to hear.

Thanks and happy new year!

@doctorsunset: I noticed some of your posts on the Roger Linn forum and I’m curious if the more recent firmware updates got velocity more playable for you or whether you’ve just made peace.

The last couple of firmware updates have been pretty stellar. The velocity response has improved dramatically since I received by device at the end of the summer. It’s still not like playing a piano, and I suspect it never will be, and probably shouldn’t be, but it’s a lot more playable nowadays.

The most recent update also allows you to greatly increase the dynamic range of the sensor; before the update I was able to reach the maximum pressure output very easily (too easily in my opinion), but the update allows you to set the device so that a much greater force is needed to max out the output. While this may be slightly less ergonomic, I feel it greatly increases the expressive range of the instrument.

In this regard, I think the pressure response of the linnstrument is very well suited for slow modulations (especially since the last update), and you could definitely accomplish this with the x axis response. The y axis is a little bit tricky, in my opinion. I find this modality to be the most difficult to play with meaningfully, but I expect this will improve with practice.

The pressure can be easily set on the linnstrument to output 7 or 14 bit CCs, which is what Roger is referring to in the quote posted earlier. I have found 7 bits to be adequate, but it’s definitely nice to have the 14 bit option.

The pressure can be easily set on the linnstrument to output 7 or 14 bit CCs, which is what Roger is referring to in the quote posted earlier.

Oh! I’m happy to be corrected on this point!

It was in a pretty recent update. The excellent support and continued development are definitely among my favorite things about the linnstrument.

I probably shouldn’t have, but I played a Haken Continuum at NAMM yesterday… daaaaaamn. I know what I am getting next…

I probably shouldn’t have, but I played a Haken Continuum at NAMM yesterday… daaaaaamn. I know what I am getting next…

I realise it was probably a relatively brief experience playing the Continuum at NAMM, but how would you compare it to the Linnstrument? What makes you want to buy one?

It’s just incredibly responsive in every dimension and feed great to play. The onboard DSP synthesizer sounds great too.

Trying color coded notes in a fourths layout because why not? 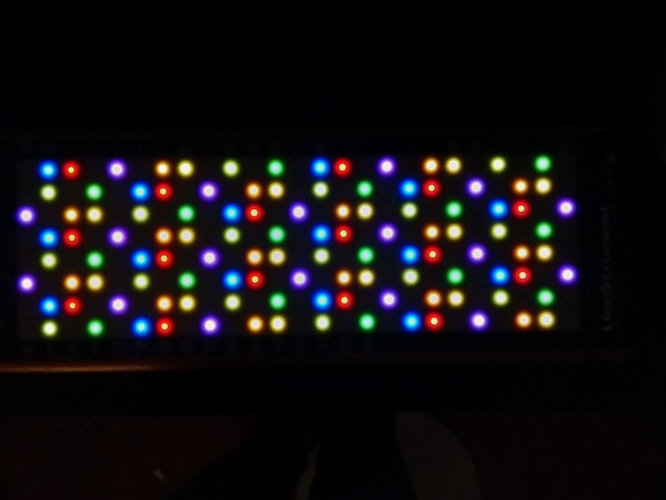 Thanks to advice from this community and then a trade, I now have a linnstrument. It’s a real joy to play, especially with MPE synths (A Modor and Deckard’s Dream). I’m wondering if anyone here has encountered good exercises for practicing with it? Could be sheet music, tab, whatever, just curious if anyone here has encountered or invented a disciplined way to improve their playing. If so, let me know!

I get great mileage out of practicing the Linnstrument as if it were a guitar. Same scales/exercises, etc.

Thanks! that’s helpful, do you use all the same chord voicings? This is the part of the linnstrument that I feel is trickiest.

My hand has a hard time making the same chord shapes, rotated 90 degrees, as I would use to play chords on the guitar. Obviously, it’s easy enough if I use two hands. But then I feel like I’m kind of not taking advantage of the spacious layout of the keys and when attempting something like a left hand bass/chords and right hand melody kind of thing, It feels a little tricky/cramped to play one-hand chords. I’m trying to figure out other, more vertically splayed forms of familiar chords but haven’t gotten there yet.

@rstn you are likely a better guitar player than I am!

These are the chord shapes I use.

Apologies if this doesn’t fit into the “what are you doing with…” prompt of the thread, but as this seems to be one of the Linnstrument hubs in the forum — does anyone have experience using both a Linnstrument and a Sensel Morph? I’m curious about the differences in physical sensitivity / configurability between these two.

I currently have a Morph, and while it’s really responsive in some ways, I feel like the lighter-pressure-responsiveness needs tuning that Sensel’s apps don’t provide. For example, the “sensitivity” seems to control a pressure threshold after which a note on or off is sent, rather than defining a curve or something like a velocity delta. The result for me is that it takes more pressure than I expect to trigger a note-on, and a note-off comes sooner than I’d like. Does the Linnstrument exhibit problems like this when playing with light pressure?

I have been using 16 of the pads for cc-control. This works really well!

I am still only scratching the surface of my Linnstrument, but my favorite things are:

The layout: As a guitar player I never got comfortable with the piano layout of midi kayboards.

Pitch bend: Even in monophonic mode being able to slide and use vribrato is SO nice!

After touch/expression: Like mentioned before, using 16 pads to mirror 16 knobs is great.

I am demonstrating it 40 minutes into this interview: https://youtu.be/iZut6Ksv5I0?t=2440