What sound editor for this task?

For a particular project i’d need to take some long audio files (whole songs) and cut them into successive regions that are perfectly looping. The excerpts need to be perfectly looping but also the end of one portion should be exactly at the start of the next one.

The workflow that i imagine is :

if i remember well, Sound Forge did this. But my trial expired before i tried this.
i could use Ableton Live and Warp markers as regions, but the export process would be a nightmare and i’d prefer go to a more “traditional” editor.

Help would be awesome.

I’ve been working with Resonic Pro:

Resonic is the planet's fastest audio and music player, browser, and sample manager, built around a big waveform view and a frequency analyzer.

Thanks. I’m a former user of Wave Editor and HATE it ! i never managed to do anything with it. i’ll see if i can try the trial version !

Having a look as well, thanks !

So Jason, would you care helping me on this ? How would you do this ?
What i did for a try is make a first loop, “add marker”, then drag the left side to the right, and repeated the process. But then, it always adds two markers, making a sort of duplicate of the previous end one, with an offset of 2 ms. I guess i could just delete duplicates at the end ?
Also, what if by mistake i click on a wrong place, loosing my selection and breaking the chain ? Any way to place the start of the selection to a marker ? (i m cutting a 6 minute piece into 200 loops, multiplied by douzains of interpretations of the same piece…so efficiency is crucial !)

Am i wrong to think it’s Windows only ?

Forgot about that small detail.

Too bad. Twisted Wave seems ok, but i’d like to have Jason’s advice before pulling the trigger !

You could do this in Reaper pretty easily. Free trial too.

To place the start of the selection to the marker, use these options. 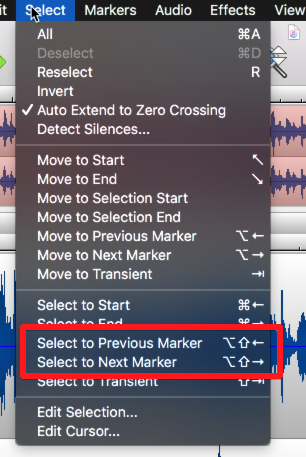 You should also be able to drag markers without duplicating them, not sure what’s going on there.

I can recommend TwistedWave best audio editor for me

select and adjust a loop while auditioning it

once i’m happy with this loop, set the loop points as start and end of a region

adjust the next loop
and so on,

and then, finally, export all these regions to single audio files.

cmd+option+r : render dialog, or use the region render matrix to select which busses to render per region

(there is also a “clear selection, place marker, extend selection to next marker, markers to regions” workflow)

Thanks, this helps. i’m almost there, but there are still two things that bother me : the loop isn’t updated until i mouse up. And when zooming in to set the end point, the focus gets back to the starting point. That’s making the process much longer and tedious. Sorry to be so picky, but i’ll have to do this for hours if not days, so this matters a lot.

And before going into cutting those files, i had a dreadful doubt :

in the end, this will be played by a max/MSP patch looping a portion, then, after some time, move to the next portion, seamlessly (i mean, no ‘click’). So a totally different approach would be to do all the stuff in max/MSP. Set up a cue list, and then use the list to drive playback.

EDIT : trying as i am typing. In Twisted wave, place markers, then export the markers as a .csv file, that make a list of cue almost ready for the use in a coll in max/MSP, i think i’ll investigate this.

Many thanks for the detailed explanation !
I’ll try this if my previous try isn’t that good.

So, Reaper is quite nice (once you’ve set up your shortcuts), and can also export markers as a cue list.
The only thing i miss is to automatically snap to zero crossings when selecting the loop. Any idea ?

maybe it’s not the most common sound editor, but QLab would be up to the task I guess

if I got well… try Recycle by Propellerheads.

Not really. I want to create loops within a long file. Not slices within a loop.
I think i’m going the Reaper route. I’m a bit overwhelmed with the shortcuts and customization but i’ve got the feeling that it’s worth it.