What the forum is about

Nothing but gear talk is a problem with a lot of electronic music forums and indeed music making forums on a whole. Years ago I used to participate in IBreatheMusic forums which had a strictly enforced no gear talk policy which led to great focussed discussion on theory (it was also a bit of a noodly guitar boys club). There is a classical guitar forum I used to like that was more focussed on repetoire and technique, rather than gear. The same things happens with Painting websites, the discussions are more often about the paint and brushes and not how to apply them.

I like that the threads about books to read and philosophical ideas are so popular here. Perhaps that shows that inspiration and ideas are as important as tools.

i’m a longtime gear forum lurker myself but never really wanted to post in any. i came here for info and resources re: monome, and stayed because i immediately felt like the conversations were creative, inspiring, constructive, and the vibes were very genderless in the best way. no boys club weirdness.

as a woman who is also gay, this site has been the first place on the internet related to music and gear that i’ve ever found where i really felt comfortable and welcome joining the community. and i’ve already made some friends! i don’t care to participate in the kind thread that OP referenced unless it’s an IRL discussion, but i just want to share some good vibes and luv here to everyone who post and promotes a really sweet, calm, and smart forum for all areas of musical and creative discussion.

I just want to know what does ‘cis males’ mean in the top comment?

BTW - Its a good forum this, I ignore the tech stuff as I more than happy with my set-up which is simple and takes care of all my creative needs and don’t need to know the vast amounts of stuff written but I like philosophic and theory stuff… The ‘democracy’ page stuff is interesting but seems focused on American Politics.
I sometimes it feels like the majority of users are from the USA but I might be wrong?

Do we know a rough mix of nationalities on here? Would love to see a breakdown on where people are logging on from? I am guessing more than 50% are from the USA?

I don’t know if most are from the USA, there’s quite a few I can think off the top of my head from Europe. I’m from Canada myself… maybe the democracy thread is more USA centric though.

Cisgender (often abbreviated to simply cis) is a term for people whose gender identity matches the sex that they were assigned at birth. It is the opposite of the term transgender. Related terms include cissexism and cisnormativity. German sexologist Volkmar Sigusch used the neologism cissexual (zissexuell in German) in a peer-reviewed publication. In his 1998 essay "The Neosexual Revolution", he cites his two-part 1991 article "Die Transsexuellen und unser nosomorpher Blick" ("Transsexuals...

Another UKer here… Scotland this time.

I created a poll for fun: Where in the world do you live?

Indulgent, I know, but: just a bump to say how much I continue to value this place, its people, and the music you make and share with us. As I continue to be disappointed with so many of the communities around music, this one continues to be one that nourishes me - even when I’m in a rut and mainly refreshing Lines rather than making sound…

for me the output of the LCRP’s are the most tangible and positive outcome of the lines community. after reading a lot on here everyday it’s nice to listen to something the members have created. also the Sound and Process podcast is super nice.

I’m doing a PGCE at the moment, so studying ways of learning. I’m reading a book called communities of practice: 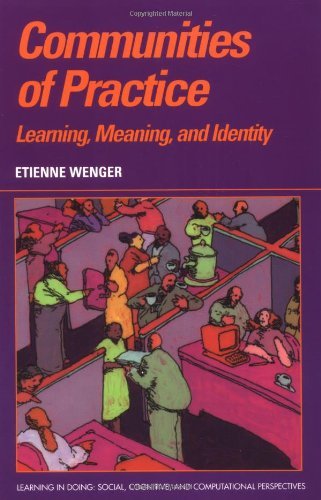 Here is the intro: 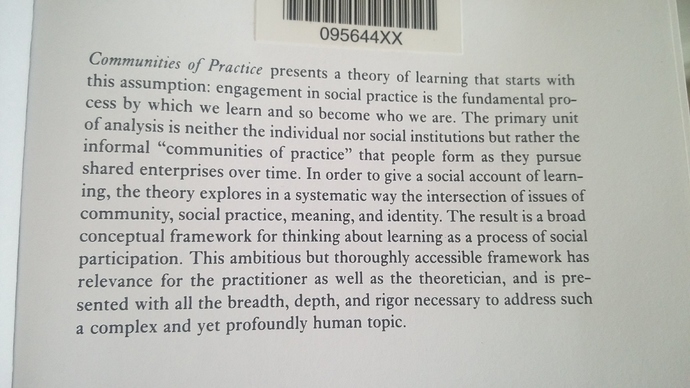 Only forum I’ve been on that talks about gear as a means to fulfil an artistic goal, rather than for a home collection. Worth the price of admission just for that.

As someone who is basically self-taught, and separated from these communities in the offline world, I’ve learned so much in my brief time on this forum, and my goal is to keep learning. I just received two great book/author recommendations in the past 24 hours, for instance, in the midst of some very thought provoking discussion!!!

This is the only place I’ve been able to discuss many of the core artistic/philosophical ideas that flow from the challenges of my personal situation and creative practice.

My problem with other “gear” forums, where I’ve been openly attacked or otherwise ignored for discussing these ideas, and where I’ve seen others attacked for simply being different, is not the gear. I like that as much as anyone, perhaps to a fault.

But separating gear from social/artistic/philosophical contexts creates an unacceptable situation where gear is merely given, rather than shaping and being shaped by all of these contexts. This actually stops people from thinking about gear!

So “gear” forums don’t end up really discussing gear after all. There’s no avoiding these other issues, including politics. I hope the success of this way of interacting can inspire forums in other domains. Hopefully it impacts the offline world as well.

After visiting the three other music forums I go to semi-regularly, I’m really feeling thankful for what this forum is about. The internet sure can be a weird and angry place.

Internet communities require thoughtful planning and constant curation or they devolve into a Hobbesian cavalcade of misery.

So “gear” forums don’t end up really discussing gear after all.

This is actually so true. So much of the comments I read on most gear forums / websites, only read like this “this is better sounding than the other, cheap xxxx versions” “this is just as good sounding and it’s half the price of the other xxxx versions”, without anyone ever settling before screaming into the void about what “good sounding” is (we argue about that here), what the price mean depending on the scale and the intent of the maker (we talk about that here extensively, it’s a “monome” originated forum after all) or closer to home about their own impulse as buyers to have an opinion on every piece of gear that comes out (the GAS haiku thread is there for those who want to do that here in just a few words !). And so they scream and they scream and what it trully feels like is a bunch of people trully desperate for validation, maybe because they want to belong, to be reassured, I don’t know, there are probably hundreds of alienations and defense mechanisms at work that can explain these very toxic behaviours, but indeed, one thing they are NOT doing, is discussing gear.

I’m here to talk about music. Specifically, ways of thinking about it, and ways of making it. Sometimes that involves gear. More often, it does not.

It’s been delightful to discover that this eclectic group of musicians is a quite wonderful group of people to discuss a rather large number of other subjects with, as well.

I find Lines to be really inspirational. At its best, it’s about sound and process and composition and life.
I was also inspired by Lightbath’s most recent video for the same reasons. It was one of the very first “gear demo” videos for the new Tides, but he took it SO far beyond that. He made it about sound and process and composition and artistic choice…
I hope the community (Lines and the electronic/modular communities in general) continue to move away from talk about choosing gear and into discussion of art and what we chose to do with the gear.