Which MacBook should I buy?

Another touchbar solution I heartily recommend is BetterTouchTool. Let’s you put pretty much whatever you want in there. Buttons, sliders, output whatever. Costs like $5. I turned mine into a switcher with some output and and opt/alt view with sliders for things.

Can I make the Internet Explorer search bar from macOS 8?

My caps lock is hard coded to ctrl. I want to remap esc to Siri and speak “press escape key” to exit insert mode in vim.

I built myself a desktop one in 2013, realising for studio work it doesn’t move, and for much other work it’s tethered to a big display, and for health reasons it better not be a laptop I hunch over all day.

Pretty sweet machine at the time, very quiet, and it still packs a punch enough to be my main workstation. As time has gone I’ve valued it more and more. Recently I put in a quiet GTX1060 and 2 x 8TB enterprise drives in Raid 0. I might get another 16GB RAM next. Hardware reconfiguration has usually been a breeze, all the way to connecting an old 17" display over VGA to use as secondary.

System updates on Hackintosh are not trivial. I’m a little concerned that many new macOS features seem to be tied to their custom chips - T2 at this time etc. Am staying with macOS 10.12 for now. Logic Pro X will eventually push me to try Mojave, forcing me to allocate a fair bit of time to read, plan, trial, execute.

So which Macbook to buy? If I was buying now, I’d go for the 13" MBP and, circumstances permitting, I’ll replace my Hackintosh’s mobo+cpu+ram down the line.

If anyone is considering getting a MPB with the discrete GPU, new GPU options (mobile Vega 16 and 20) will be released this month

This is way OT, but you can also exit insert mode with ctrl-[

For all the musos who are following the hype, there is an excellent compilation of engineering problems of Apple products by right-to-repair activist and independant Apple technician Louis Rossmann https://youtu.be/AUaJ8pDlxi8

One thing I have been thinking about is heat. Somehow I feel that it is better to get a less powerfull, but more stable laptop for live performance. I am therefore considering the quad core 13" over the 15" mbp as they seem to not thermal throttle as easily? The worst is making a live set in your cool studio, bring it on the hot stage and have it all fall apart.

maybe i should mention that a year later, the screen on my 13" MBP 2016, has died twice. very expensively. and the awful “clicky chiclet” keyboard is aging poorly. i hate this computer.

there is no way in hell i would buy one of these if day job didn’t absolutely require it. thinkpads are so much better it is actually sad.

Ugh. I had a space bar issue with my 2017 MPB and got it fixed with a day left on my warranty — a day later and the quote would have been in the range of $750.

My wonderful 2013 15" MBP had a brush with death lately - water spill, my own fault. It’s mostly recovered, but I was sweating bullets for a minute wondering how to get a pre-Touch Bar MBP for not too much money.

On reflection, though, if/when it finally dies my best replacement prospect is probably a Dell XPS right now. With the Linux emulation layer you can get now in Windows, I’d be set for everything I really need. I don’t love Windows the way I love Mac OS, but I also don’t love Apple 2018 the way I loved Apple 2006, so.

Oof true all above. It feels insane to even consider this, but the 2015 15" MBP still seems like an attractive options.

With that being said, I’m leeeaning towards picking up a 16gm RAM MBA, just to future proof(ish) a little bit at the lowest buy in I can, rather than going all in on a more expensive version of a compromised computer.

Has anyone else been thinking along similar lines?

at your price rand you have about 2 options for new. if your tracking audio or sequencing outboard gear you don’t need as much power as a vst heavy project.

Hey gang, sorry to blow up the thread, but one last q:

I’ve been trying to make sense of the specs here (newer dual core CPU but lower spec, etc), but a 2018 MBA w/ 16gb RAM would still represent a pretty huge spec boost from my current machine, right? I got this one way back and maxed it out, but it is starting to feel a bit long in the tooth– 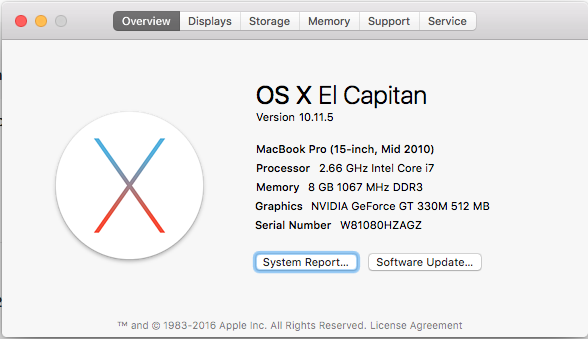 Depends on what you’re using your Mac for.

Your 2010 MBP has a discrete GPU, who can still be preferable if you’re working with video (And lucky you, it’s an NVIDIA who can run CUDA). The MBA doesn’t. The i7 is also a good processor.

Did you already change the hard drive for a SSD? Because my 2011 MBP is still running like a champ, with macOS 10.3.6

ha! that was kind of my fear - i spec’d this machine out so hard when I got it that anything at a non-astronomical price in the mac world might end up being a downgrade, or at the very least be about the same.

I got the SSD as a choice when I bought the machine (i think this was when it first became an option) - but unforutnately my computer is starting to hit some GPU glitches, and lots of heat related slowdowns.

if the discrete GPU is failing, I don’t know if you should invest in this computer.

but you could try to install a new SSD - it’s rather cheap today - with a clean install of macOS, and you could definitely re-paste the heat sink. it could help regarding the heat.

I don’t know about the MacBook Air, but for what it’s worth, I believe your specs are about the same if not better than those on my 2016 MacBook (not Pro)