Who's using 2 or more grids?

I came across a good deal on a grid and tinkering on the idea of having a dual grid setup but wondering if it’s a bit overkill, I used to own a 256 back in the days and loved the format, is it possible to somehow link the 2 and use them as a unified 256 grid?

I’d like to bump this idea. I recently purchased a new 128 some my non vari-bright grid was tough to use with many modern scripts. I’d be curious about connecting them to behave like a 256 (especially once the VB_driver project is done and I update my grid).

But for what it’s worth, I was doing some of the Norns studies to get a better idea of how the grid programming worked to create a script module of effects or controls for my second grid to tops in to other scripts.

I’m using 2, but as seperate entities; one to control Norns and the other hooked up to ansible for Modular stuff

I guess an interesting (yet granted niche) tool would be getting 2 128’s to function as one unified device. Would you have any ideas of how to achieve something like that in, say, a norns?

I would love a 256 in the style of the current grid.

I’m using a 512, essentially dual 256’s. Each one is running its own app–sampler on the “left grid” and audio processors on the “right grid”. I like having the extra control and room to experiment with different workflows.

Yes! The 64 mostly functions as a bank/page changer for 128, Linnstrument and Faderfox, and also some master functions like changing the tempo, muting parts etc. 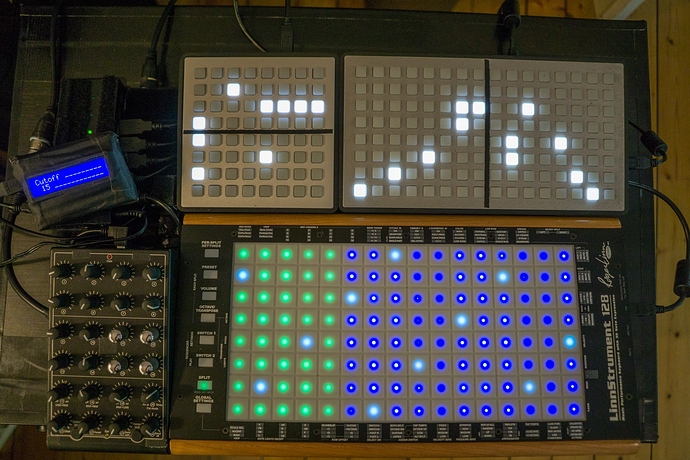 ansible/ww/mp/es with one grid, meta controlled / sequenced from teletype with another grid.

So yep rocking t he double grid now, one on mlr and the other on a couple of ansible.