Hi! I just finished building a small (eurorack) module prototype and want to see if there’s interest outside of my studio…

It’s a super simple module which allows me to send OSC over wifi from ipad or pc to my modular. The module has 20 12-bit CV outputs, (in code) switchable from -5 to 5v or 0 to 10V. Since its 12bit, you have 410 steps per octave (on 1V/octave), which should be enough for doing basic microtonal stuff not possible with midi.

It’s based on just an ESP8266/NodeMCU (which comes with wifi and is programmable via usb/Arduino ide) and a MAXIM113300 dac/adc. Total of these component should be around 30 euro.

The 113300 also allows you to programmatically switch to use the same 20 ports as adc, so as CV input. Still need to program the switching and OSC output though, but I’ll save that for some time later to keep everything simple for now.

If there’s enough interest I can put some effort into a write up on how to build such module yourself. Raise your hands, please. Also for the non-DIY I’m thinking of maybe productising the thing (also to fund future module ideas), but I’m not so confident being a software guy doing a hardware product. I’m open for ideas

Still need to tidy up the (Arduino) code, but it will follow shortly…

From Max to the scope:
https://vine.co/v/iLIWJK61nzF

From Max to the modular (with sound):
https://vine.co/v/iLEJV6XiMzq

Would love to learn more about this.

Certainly curious to hear more as well – this would easily allow you to control your euro from say TouchOSC or Lemur running on an iPad as well?

ie: the module broadcasts a wireless network that you connect to? Sort of similar to The Missing Link? (but cv, and euro, obvs)

Yeah! Everything sending OSC can be used. Tried it with Max 7 and Wekinator so far. Don’t have TouchOSC, so don’t know how configurable it is, but guess it will work. I now have 1 config which requires you to send OSC messages like /dac/2/ 8.55 meaning set output 2 to 8.55v. If I’m going to turn this into a product I’ll make it easier to configure this without having to edit code.

I currently have it set up to connect to my home network with the wifi name and password hard. Doing it like the missing link with an ad hoc network (e.g. ipad joins a network which the module broadcast) is possible and should theoretically mean less latency as well. Should test this, though.

I’d definitely be interested to build one! Been looking for a multi-channel Max to CV conversion method that doesn’t require an audio interface, and this looks great.

If it’s primarily a DIY project I’d be happy to help w any hardware issues!

Have you done any tests on throughput? I’m curious how it goes when transmitting all 20channels simultaneously.

Amazing! Very interested. Will it be at all possible to run the connection over usb?

Didn’t try it with OSC yet, probably using one message with the 20 different values is better in that case. As far as I can see the DAC doesnt support batch sending, but the SPI is fast enough for decent white noise on 20 channels.

Theoretically possible! Maybe I should move the usb port to the frontpanel…

That’s pretty cool.
The thought of a non-wired system between Max and modular is certainly interesting.
Would it would be adaptable to use banana jacks rather than 3.5mm ones?

should be no problem! 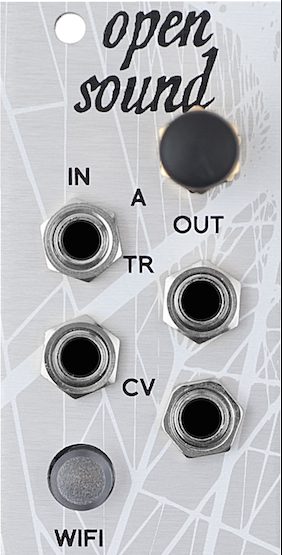 The Open Sound Module is a WiFi connectivity module. It sets up a wireless network connection directly with your modular synthesizer. The OSM has two CV inputs and two CV outputs, along with two tr…

There is this module, a mate helped to build it.

may be of interest to you.

Super interested in seeing this as a DIY project. 20 computer controlled CV I/O would be awesome, especially with the low low price of a few ICs and a PCB.

absolutely interested but no DIY skills to speak of

I’m well into this,

I think this could be great being used in sync with BEAP, I’ve seen the Rebel Tech Open Sound Module but would love to see if I could DIY something similar, for a much cheaper price.