Only of interest to those in the North of England perhaps, but we have been putting on a series of eclectic shows for a while now, it has become a good place to meet up and have a chat as well (there is no background music between acts to facilitate conversation!)

Our next show is on March 6th: 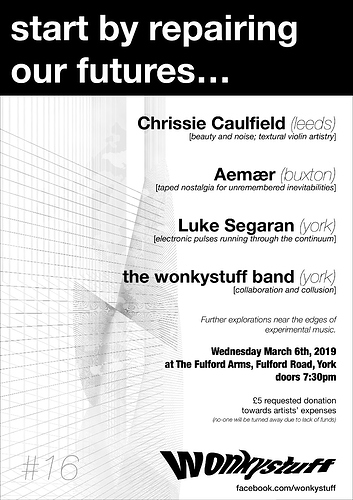 Oh, and whilst it’s a nominal £5 on the door, if you are short of funds let us know and we’ll let you in — we’d all rather play to a full room than an empty one…!

In my neck of the woods so would love to go (unfortunately baby limits my spare evening time at the moment). Good luck with the show!

Do you plan anything for So-Yo (Sheffield)?

Thanks — and yes, I remember the limited time that a baby leaves!

Sorry, no plans to do anything outside of York at the moment… we have had a few performers who we have seen at ‘Electronic Music Open Mic’ (EMOM) nights, and I would think that there would be one of those running in Sheffield, so that would be a more local alternative

I will be looking forward to this

Hey man. Im away from Sheff at the moment but lived there for years before leaving uk last year.
You familiar with these places?
Audacious Art Experiment (Now called Hatch)
DINA
Delicious Clam

All searchable on fb and good spots for ‘alt’ music in its various guises.

I’d heard of DINA but not the other two. I’ll have a look

My (eventual) aim is to get into performing modular live, so it’s good to know there is still a scene for that type of thing in Sheffield (which has such a good history for electronic music in general).

Been a long while (getting old

) since I’ve gigged there, and when I did it was always in a band context

for those interested, it was a really enjoyable night with a great mix of performers and a very appreciative audience.

For the record, here is a video of the headline set recorded by Chrissie herself. Absolutely hypnotic, the whole room was transfixed…