This thing is a bit of a mind-bender:

X-Bay gives you up to 256 io plus synth modules

In 15 minutes I on the Sonicstate and Kickstarter pages I couldn’t decipher what it is they are selling.

looks like some sort of (omg analog) matrix switcher.

lol, I was just thinking that.

That’s one of the most unclear campaigns I’ve ever seen. Which isn’t helped with the bulk of their rewards are just clone modules?

I’m really interested in what (I think?) they are selling, as repatchability is really exciting for me, especially if it’s dynmamic, but wtf it’s confusing…

edit: One of the things I was thinking of doing was having an arduino-controlled 4x4 vca matrix, so I can do 4x4 repatching on the fly, but 16x16 is better than 4x4. I just can’t tell how/what it works. Does it work on it’s own? Can you just mount it in a normal euro enclosure? Does it need to fit within their larger system? Does it have to be controlled with their software or can it be controlled via the Arduino regardless of how? (USB-MIDI?)

I think I might want this crazy thing, but I’m really not sure!

Which means I’m gonna sit back and watch it unfold. But I’m intrigued!

So an 8in/8out modular system that’s internally patchable with a set number of internal audio routes–their modules are circuit boards that you plug into the rack.

Basically BERGFOTRON with a web interface.

I’m not sure the guy in the video knows what’s going on, he talks about studio integration into their system architecture while it’s very clear to me you’ll need an “X-Mod” or some sort of module-board to interface their system with anything external.

From the demonstrations of their internal patching interface, it looks one-to-one in the video which means no mixing of control/audio signals which is a pretty defined use-case in synthesizer-land.

“And we can build it custom with unlimited number of channels”
Flat-out untrue statements like the above set off a few warning flags for me.

Woah, Bergfotron looks way more interesting! I like that it can be patched “internally” or externally, either way. Very cool.

wow, that took quite some time for me to decipher what is required to build a system…

basically you have to shell out nearly 80 euro per module you add, for the matrix…

its a nice idea, but seems like it pretty limited, and gets expensive very fast.

To me the Analog Modules of Reusable Engineering represent some synthesizer design paradigms waaayyyy ahead of its time. Lots of use cases have been implemented that contemporary vendors are still struggling to encapsulate in their design (internal/external patching like you mentioned).

I think the X-Bay team are trying to digitize cable connections.
But what they need to do is digitize the physicality of plugging in a cable.

To me this sounds like removing all of the fun and immediacy of patching a physical thing, replacing it with an horrid 3D software editor in the name of patch recall and “analog sound”, with some very big scalability issues.

I’ve playing around with the idea of using switch matrices for networking modules together and the unsurmountable problem is that you need n^2 switches to connect n input-output pairs. This means it gets exponentially costlier to expand.

Yeah, I think the advantage of the AMORE model is that the switch/matrix isn’t a separate module, but rather a capability built in to every module. The internal interconnections are a bit “extensive” but significantly less expensive looking than this kickstarter approach.

To me this sounds like removing all of the fun and immediacy of patching a physical thing, replacing it with an horrid 3D software editor in the name of patch recall and “analog sound”, with some very big scalability issues.

I’d need a 128x128 matrix to handle my Serge - and that is a just a small 3 rack system, not nearly as dense as most Eurorack! AND - patching that on a screen would be a nighmare!

This looks like zero fun. Not sure why they don’t just use a physical matrix or patchbay. (yes - totally understand the whole affordability part, but still…the examples they use are giant systems anyways)

reminds me of what ssl did with the matrix console, but less clear. it was a great idea for a studio - hook up all of your outboard gear, and audition different hardware inserts / chains via a digitally controlled router. really makes analog workflow fast and (more importantly) recallable, which is why I’m so surprised they don’t reference recall as a potential use/feature in their video. same idea is much less cool / interesting in modular synths.

Going further down that line of thinking — what could be nice is a rack with modules that have a faceplate, knobs and jacks — the same deal you get with your regular modular system — except you are not patching analog signals, just digital pulses that allows the system to track what input connects to what output, which is replicated by the switch matrix. Then you’d get good user experience plus total patch recall, and if you’re willing to duplicate your system and matrices a bunch of times, true modular polyphony.

Implementing this in the analog domain this way would still be very expensive, but doing so in the digital domain could be very affoardable because there would be no need for a switching matrix and the processing power you’d need for this is well within reach (although it depends how crazy you want your modules to be). Somehow it seems no one has attempted to do this yet (do correct me if I’m wrong!).

Then you’d get good user experience plus total patch recall

seems to me that your idea breaks as soon as you recall a digitally stored patch after having removed physical cables: connections are made, but invisible, and yet you can add visible connections (physical cables), meaning you have to track in your head both the invisible and visible realm, and it becomes witchery even more than operating a “standard” modular synth.

This could be addressed by creating a modulation matrix UI that uses LED ringed endless encoders, and/or an OLED screen. Not an easy challenge though.

This got me thinking…something really exciting would be a eurorack patching matrix with i2c and teletype integration, allowing for algorithmic re-routing or just avoidance of physical repatching. 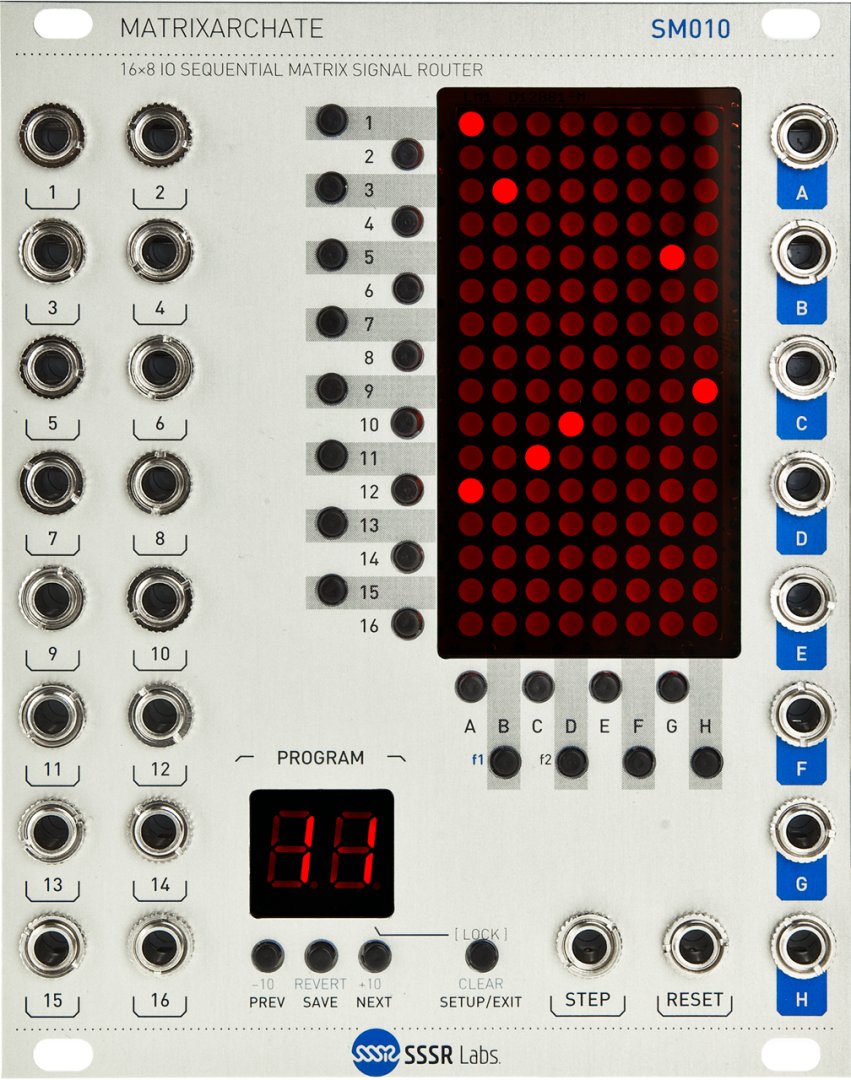