Over on MW, xaoc_tech posted:

Now, regarding problems with Jena, the reason may be that the unit arrived with Synchronous mode (regime) switched on, and that forces Jena to determine the cycle length at start, and it consumes all CPU resources (including display control which is done in software), especially if there is no periodic signal plugged into Drezno. One way to get out of the deadlock is to try power Jena without Drezno attached, and try to switch off the Synchronous mode (LED display set to Off). Sometimes it may be necessary to use a longer cable and plug/unplug the power from the module while the rest of your system is powered.

Seems like quite a flaw and I would hope for a firmware update to address it.

I just bought a Jena yesterday and expect it’ll arrive early next week.

I had some power issues with Jena when I first got it when powered with the basic uZeus. Upgraded to the bigger brick for the uZeus and no issues since. Jena to me is a completely under appreciated module.

Drezno is so fun! Not exactly sure what’s going on in this patch, but it’s very destructive on oscillators on a pair of oscillators.

Then mess around with the pitch of both oscillators. Of course Rubicon and Odessa can be swapped out for any oscillators as long as one has a sync input.

Picked up this trio used a few weeks ago, and am really digging just how odd(?) this system is, and how easy it is to get (sometimes loosely) related odd things out of it. One of the keys for me is to watch both sets of yellow lights and understand how the sliders on Drezno and the Jena phase knob interact with them.

In the first recording, I am feeding an ever changing looping envelope courtesy of the ADDAC506. Jena is on Bank E for related rhythm triggers. The voices are DPO, Mysteron, Morphagene and some squonky clarinet. The second recording is a benjolin drezno lipsk feedback patch triggering rnd step/morphagene.

Here’s a set I did where drez and jena are driving all sequence and pitch information. https://youtu.be/CjIX9EAIers

Looking at a Jena for sequencing my traditional drum sounds to generate non-traditional rhythms, but I’m having trouble finding good examples of the Jena working as a gate sequencer for drums. Are there any patches/experiences that you all can share?

It’s in my cart, but I just can’t seem to pull the trigger.

Starting at about the 1 min mark in this video from Xaoc, all of the triggers are sequenced by Jena 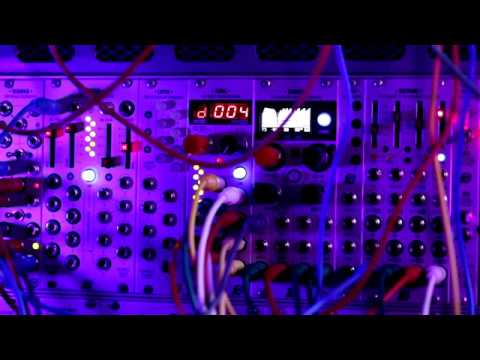 EDIT: I hope Drezno is also in your cart

I’ve never used it for a more typical drum part, but about 14:45-20:48 in this, all the triggers (Manis Iteritas drum, a sort of buzzy Odessa part, and some “clicks and pings”) are coming from Drezno or Jena outputs, while I drive it from a not entirely stable LFO from Kermit mk2 trying to sync to my DAW. I like how the variance in Kermit’s tracking yields shifting variations and “fills” but still keeps the overall rhythm.

(Once in a while Kermit completely loses its sync and goes flying off – you can hear it start to slip a bit at the end of this section, but it really went nuts just before I recorded this take and I had to wait for it to stabilize.

I suspect the upcoming Erfurt is going to be a pretty reliable way to clock patterns from Jena.

Starting at about the 1 min mark in this video from Xaoc, all of the triggers are sequenced by Jena

This is perfect, thank you! Don’t know how I missed this, but it’s just what I wanted.

EDIT: I hope Drezno is also in your cart

It would be, if it were for sale anywhere. Oof.

I’ve never used it for a more typical drum part,

That makes me think—once you get into “sequencing” drums using an analog signal converted to bits, you’re starting to move beyond “typical” drums. I suppose it’s more precise to say I want to use somewhat traditional drum sounds shaped into unconventional rhythms that are still related somehow.

Also, that track is rad as heck and a wonderful showcase for the potential of this system. The only problem is that I am really intrigued by that Odessa now.

I want to use somewhat traditional drum sounds shaped into unconventional rhythms that are still related somehow.

I don’t have any of the binary system modules (although I really want them!). I do have some experience programming drums with ADCs, though, and I assume the following can be done with these modules.

Really, the only thing you need to do is to feed a repeating CV sequence (eg a Turing Machine or Marbles) into the ADC and then tap the individual gate outputs. To get related sequences just add constant CVs to your base sequence so that the incoming CV values are all shifted up or down by a constant amount. You can also shuffle the bits or invert them (I think you can do both of these things with the binary system modules?). Note that adding a constant CV to your sequence is the same as inverting some of the bits.

The lower bits are more sensitive to small CV shifts whereas it takes larger shifts to affect the higher bits. You can use this creatively: eg, if you want your kick drum to change frequently when you shift the CV, feed it from a lower bit.

I picked up a Drezno and Lipsk recently after being completely fascinated by the possibilities with the system, and so far they’ve been most delightfully fun and musically rewarding. I love how they can output so many interestingly related yet surprising events throughout the rest of my system from a simple input. Very playable. Terribly enjoyable.

I’m most curious to try Jena out in the future.

Does anyone have any thoughts on how Erfurt might be used musically/creatively?

As I understand it, you can flip bits using the Lipsk module connected by bus cable. Just now understanding why that would be a big deal!

Does anyone have any thoughts on how Erfurt might be used musically/creatively?

All by itself, as a binary clock divider.

With Lipsk/Erfurt, you can set the interval it will step with each trigger, and thus get different patterns out of it rather than binary division.

With Drezno/Erfurt, you can use analog CV to change those counting patterns. Otherwise it’s sort of an offset to the value coming from Drezno… which doesn’t sound super useful offhand, but I expect that some tricks with clocking Drezno (and setting Erfurt to use that clock) could result in interesting ramp patterns, like sort of an alternate universe version of Clep Diaz.

And you could combine bits from Erfurt and bits from Drezno’s ADC into Drezno’s DAC to have a sort of offset waveshape or crawling distortion thing going on; or just use a fixed offset amount to get different bit patterns out of Drezno’s CV input.

With Drezno/Erfurt/Jena, you can clock Jena from Drezno’s clock, but with the step rate determined by Drezno’s CV input… possibly some cool wavetable oscillator applications there. Or use it as a sort of phase offset to Jena for patterns, etc.?

Appealing to those who understand this system better than I do. I got the three modules lined up in my rack, Drezno → Lipsk → Jena, and I’m seeing some weird behavior I can’t quite figure out.

I am running a falling saw LFO from Pam’s into the ADC on Drezno, which passes the data through Lipsk to Jena. Jena is running on internal clock, and I’ve set it on synchronous mode look for a falling saw. It’s set on bank E, and I’m using the bits to trigger some echoey drums on my Assimil8or. So far so good! Cool sounds, great rhythms.

The problem comes when I manually toggle higher bits (5-7) on the Lipsk. The Jena immediately glitches—or starts firing triggers at audio rate, which results in a buzzing sound. Since the whole point of putting the Lipsk before the Jena was to use bit flipping to rhythmically alter the drum pattern, I’m feeling stuck.

I have read the manuals again and again, and can’t seem to figure this out. Maybe someone smarter than me knows what’s happening?

Edit: Before anyone asks, I have checked the power of my system, and I should have more than enough.

When it’s in synchronous mode, it’s trying to interpret whatever is coming in via the Liebniz bus as a perfect linear ramp with exactly the right range to address the whole table.

When you flip bits on the input, instead of a ramp that looks like the blue line, you get a signal that looks something more like the orange line: 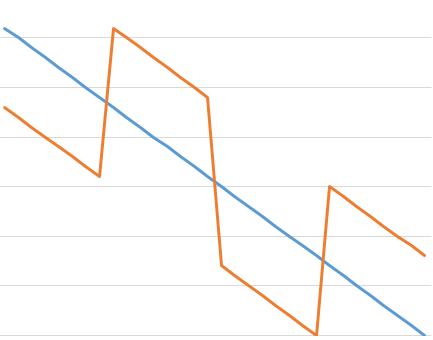 And that’s probably confusing Jena’s algorithm for synchronous mode, thus the freakout. Bits with lower values cause much smaller jumps and there’s some threshold where it says “that’s still a ramp” and ignores the actual values.

So you’ll have to run in asynchronous mode (and tweak levels as needed to get the full range of the pattern).

Edit for anyone who runs into this problem: The solution was, in fact, to use asynchronous mode and tweak the inputs. To get it all dialed in, I set Jena’s clocking to external, and plugged a pulse from Pam’s into the ADC clock on Drezno. Presto—now I can play with the speed of the LFO, and the sample rate/tempo using Pam’s. Lots of fun!

To Starthief: I was hoping you’d respond! Thank you so much. This system is a lot to wrap my head around, and evidently I still have a lot of concepts to master.

You’ve done me a great service here, and to be honest much of what I know about modular synthesis I learned from your posts around the net. Deeply appreciated.

I think this is possible now with a Noise Engineering Vice Virga, a 8-to-8 cv controllable switch… its like a switch of switches

Cool tip about the Virga.

I’m hoping Erfurt will support some polytime sequencing with the others using different bit stride amounts. It should also support gate info for phrase/arc modulation since the last Erfurt bit will appear at count 127 (roughly end of 8th bar, 16 ticks per bar).

I’ve been looking at this thread for a while now, and finally purchased a Drezno/Lipsk the other day. And while I love it (it’s inspired me to drastically redesign my case) it’s, like others have said, super deep in terms of possibilities with it. So if anyone has cool patch ideas, I’d love to read/watch them!

For rhythmic event duties, start by putting a slow lfo into drezno adc and clock the adc with the lfo’s EOR (and probs through a clock rate multiplier). It’s critical for rhythmic drezno that the clock is derived from the lfo function, because any clock slop will cause unwanted chaos (tho chaos is fun too). After that, just plumb them gates all over the place… drezno’s gain and offset then become high-level controls. Patch drezno’s dac out to a quatizer → v/o somewhere and you’re off to the races!