If you are interested in using this system for rhythms then you really need Jenna its hundreds of drum patters that you can mess with alone are great, but it can do so many other things. I agree, however, that it has a pretty high learning curve, it is easy to get frustrated, and if you are into control over everything that is happening, this is not for you. I think a lot of people bought one or more of these but simply could not figure out how to incorporate them into their work flow and sold them. All three are not indispensable for me. They also work great with Expert Sleepers new Disting Ex since they can provide endless triggers.

Could you expand on that? I came up with a long list of potential patches with Drezno, and I have one on the way now.

But I haven’t figured out a compelling use case for the A-152, much less how A-152 and Drezno would complement each other.

Maybe because I feel like I have similar functionality (sequential switches, “analog” shift registers etc.) covered by Stages/CVilization/Teletype/Marbles and don’t tend to use those kinds of patches much. I do use CV-addressed values in Teletype or Bitwig Grid on occasion.

Hmm, some possibilities there… I’ll have to keep this in mind as I start experimenting with Drezno. Thanks

One thing I’ve definitely been thinking about is clock dividers, preferably CMOS-based so they’re fast enough for audio rate. And I also realized that Lipsk is basically 8x XORs thanks to the gate inputs, and might be more interesting than I first assumed, for some cross-pollination with feedback loops for instance…

Hi! Thanks for the picture.
Is it possibble to put jena at the end of the chain, instead of lipsk?
I think im going to start just with drezno and lipsk, and add jena when things are more clear on my brain

I think someone else will have to answer this question. I sold my eurorack system a little over a year ago, and don’t remember too much about the Leibniz system! I did just build a little pod though, with no room for Drezno or Jena. 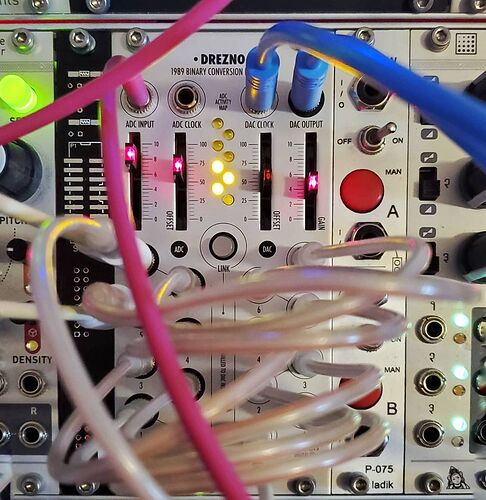 [EDIT] Correction! The key is to patch low-order output bits into the high ones, clock the DAC or ADC separately, and tweak the offset/gain as needed. Okay, but I’m still going to think about keeping Zorlon for a while.

You should be able to. If I understand the manual correctly, you can route with the in/out however you want – though I haven’t tried it. There is even reference in the Jena manual of having one Lipsk before and one Lipsk after the Jena.

thanks @shh for your feedback.
I played around yesterday with just drezno and lispk and was trying to extract gates from waveforms also feeding and external clock to the adc. Deep module it seems! Going to hook up jena on it’s own to drezno today and see what i can come up with

my drezno and jena should be arriving soon. waiting a little longer on my lipsk

but super excited to dive in when they show up

Are the gates typically noisy without inputing to the ADC clock? With a simple LFO (I’ve tried a few sources now) there are a bunch of gates that happen around the points in time when a bit changes.

Are the gates typically noisy without inputing to the ADC clock?

If so, yes normal - as Drezno will run at its own clock rate (very fast) if you have nothing clocking it with ADC Clock.

Yes, and even with nothing patched in, there’s a lot of gate activity just by setting the ADC offset. Does the noise have something to do with my power supply? Just wondering if this is normal. From the videos I’ve seen of it being used as a rhythm generator it doesn’t seem this noisy.

I expect it’s normal, or at least, I get it too. There’s a pretty good amount of gain on those sliders, so small amounts of noise getting to (or inherent in) the ADC can be enough to flip the lowest bit or two. It’s something you can take advantage of in some patches.

Could be the PSU/busboard or some adjacent digital modules, I had this behavior when it was next to shape shifter.

just by setting the ADC offset

Pretty sure that is normal. Makes sense as you are physically changing the way those signals are pushed through the bitouts.

Over on MW, xaoc_tech posted:

Now, regarding problems with Jena, the reason may be that the unit arrived with Synchronous mode (regime) switched on, and that forces Jena to determine the cycle length at start, and it consumes all CPU resources (including display control which is done in software), especially if there is no periodic signal plugged into Drezno. One way to get out of the deadlock is to try power Jena without Drezno attached, and try to switch off the Synchronous mode (LED display set to Off). Sometimes it may be necessary to use a longer cable and plug/unplug the power from the module while the rest of your system is powered.

Seems like quite a flaw and I would hope for a firmware update to address it.

I just bought a Jena yesterday and expect it’ll arrive early next week.

I had some power issues with Jena when I first got it when powered with the basic uZeus. Upgraded to the bigger brick for the uZeus and no issues since. Jena to me is a completely under appreciated module.

Drezno is so fun! Not exactly sure what’s going on in this patch, but it’s very destructive on oscillators on a pair of oscillators.

Then mess around with the pitch of both oscillators. Of course Rubicon and Odessa can be swapped out for any oscillators as long as one has a sync input.

Picked up this trio used a few weeks ago, and am really digging just how odd(?) this system is, and how easy it is to get (sometimes loosely) related odd things out of it. One of the keys for me is to watch both sets of yellow lights and understand how the sliders on Drezno and the Jena phase knob interact with them.

In the first recording, I am feeding an ever changing looping envelope courtesy of the ADDAC506. Jena is on Bank E for related rhythm triggers. The voices are DPO, Mysteron, Morphagene and some squonky clarinet. The second recording is a benjolin drezno lipsk feedback patch triggering rnd step/morphagene.