While helping your great aunt Pam clean out her basement, you happen upon a large steel box of LFOs, rhythm generators, mults, and sequencers. She says she got a lot of milage out of it, but you can have it now. She’s running a whole maker-space now.

Okay what is it really

It’s a norns mod. When you activate it, every script will have four rhythm generators (capable of doing all kinds of rhythmic division and euclidean stuff), four LFOs, four sequencers, and four mults accessible in the params menu. These can modulate parameters of any script, and you can mix modulations into the params. Use the menu of the matrix mod to adjust the mod matrix.

The usual co-conspirators of @zbs and @nonverbalpoetry were talking about the general idea with me a few months ago, and I hope this is true enough to what we were discussing. I kind of wrote all the code on a coding-bender in the interstices of my day over the last week.

Influenced by ALM Pamela’s New Workout, of course. Also to some extent by NE Mimetic Digitalis, for the “shred” and “zero” parameters of the sequencers. And Mylar Melodies’ patching style.

!!! IMPORTANT. The toolkit mod now depends on ;install https://github.com/sixolet/matrix. Install and activate the matrix mod before installing or updating toolkit.

Now you should see, at the bottom of your script, sixteen new param groups — four each of lfos, sequencers, rhythms, and macros. You can edit the properties of the modulation sources in the params menu, and then apply them to your various parameters by going to SYSTEM > MODS > matrix, selecting the param you want to modulate with K3, and mixing in sources of modulation by scrolling to the various modulation sources and adjusting the amount of modulation with E3. Linear parameters will be modulated linearly, and exponential parameters will be modulated exponentially.

Four shapes: sine, tri/saw, pulse, random. In the tri/saw shape the “width” parameter controls where in the wave shape the peak is.

You pick the division in terms of type of note — 1/4 is quarter notes, for example. Then you pick a length, an offset, and a fill for the euclidean parameters. The fill and offset are defined as a proportion of the length filled, since I didn’t want to worry about undefined values while length changed.

You can also pick a swing. Right now there’s some kind of weirdness in lattice that makes swung eighth notes not line up with quarter notes, maybe wait for that to be fixed before using those in combination.

Each sequencer has up to 16 steps, and has a trigger to advance and one to reset. You can patch rhythms to these advance or reset triggers if you like. They also have zero and shred parameters. These control, respectively, the probability that the sequencer will zero a step upon leaving it, or that the sequencer will randomize a step upon leaving it. These allow making sequences that mostly repeat but slowly vary.

Macros are parameter values that supply their values as modulation sources. I suggest MIDI mapping them or something.

Toolkit comes with an example script that has a couple direct triggers for notes from PolyPerc. It’s what I’ve been using to test it out. With the toolkit, it’s kind of a tiny modular system in your norns. 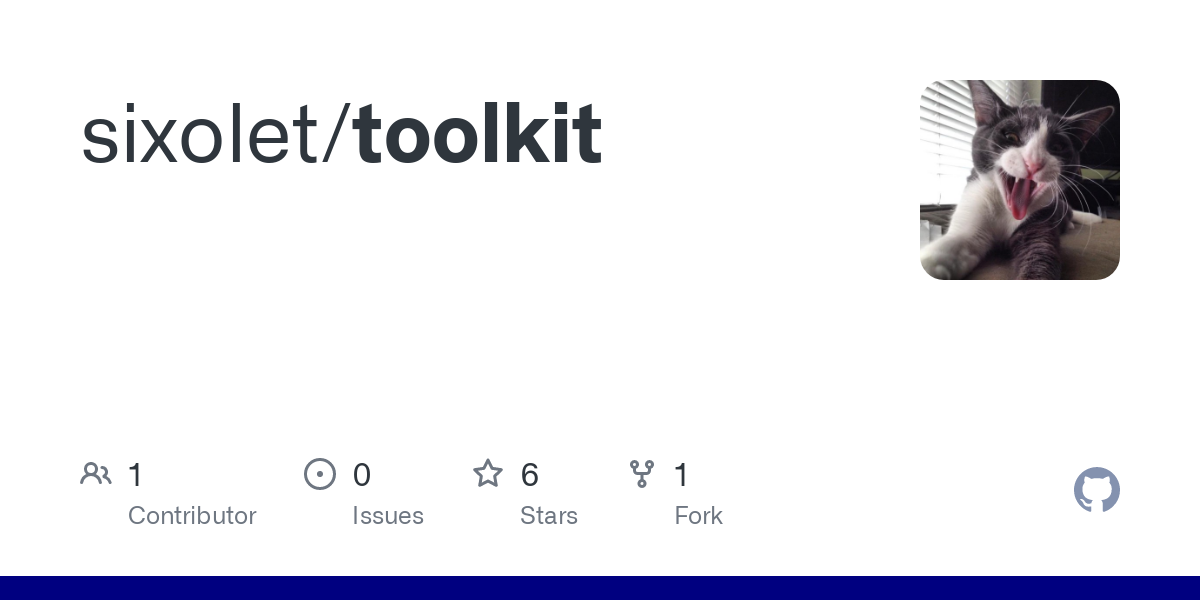 Contribute to sixolet/toolkit development by creating an account on GitHub.

Truly amazing! Thank you for this

I love this idea!

Damn this is something I’ve been really wanting from time to time with different scripts. Gotta check it out as soon as possible.

This is sick. And sounds hella useful. It also sounds like it runs along the razor’s edge of what Norns are capable of before processing and stability to to heck.

Yeah if people start running low on cpu due to this, I can add a parameter that lets you reduce lfo resolution. Right now it bangs at like 96 ppqn.

YES! Thanks for this. Looks super useful!

Daaaaang Sun! This will be HELLA useful. I have a 3D printed euro pod that I power via USB and then have a crow in. Being able to use this mod as a clocked (or I clocked) modulation source while running almost any app would be huge.

I won’t have a chance for a bit to test it alongside cpu heavy scripts like CC2, but I’ll find some time soon.

EDIT: just saw crow output isn’t currently supported. Or is it? My kid is being a wang thing morning so I can barely see straight.

Probably a different much simpler mod, which would provide some params that all they would do is make crow output stuff. Hold tight.

As I think about it (and by extension, ask for even more nonsense), if there is a version of this mod to provide these modulations through crow, having an option to send it to a midi channel and CC would be of massive value too.

Very classy of me to “suggest” additions which, frankly, are just requests… but I guess this is where I’ve found myself.

Thanks again for all this really really cool stuff!!! Just this tool for Params is an amazing gift to the community!

Yo check this out

This one is even less tested than toolkit (I haven’t even tested the pitched modulation option at all, just the pulse and LFO out) but I have to go to bed like 20 minutes ago and I think it might meet spec. See what you think. It is a separate mod, and it relies on toolkit. You will have to update toolkit.

absolutely brilliant! thank you for thinking up, making and sharing this.

crowkit could be called ‘do you even lift, crow?’
… i’ll see myself out.

this is an absolute game changer! amazing work.

when I have the mod loaded, my mixer/level page on the norns have bigger jumps between values when I adjust the levels. I have tried with the mod loaded/unloaded with restarts, and the bug persists if aunt Pam is loaded.

I am using a Fates. latest update.

hahaha I accidentally overrode a method I should not have overriden on params and the mixer was trying to display the decibels instead of the place in the range.

Anyway, pushed a fix. Also with the following features:

This is so rad. Pairs really nicely with Flora - it’s just mesmerizing to look at the plants sway on the screen, for starters.

I’d been thinking about something similar as the basis for an implementation of the ol’ Kurzweil K2000 FUN operators for Norns. This code is so cleanly written, it looks like it should be very easy to build off of PoTk. I’d be honored to submit it as a PR, if you’d be interested.

I did manage to get to a state where the LFOs seemed to halt and stopped modulating the params (that was with the version pre-hotfix). I couldn’t reproduce it though. I was trying to add a second LFO targeting plant 2 algo.

Generally I wonder how selecting targets might be made easier; I was a bit nervous I was going to accidentally modulate something critical as I was scrolling through. Maybe selecting param group first, or adding a filter by param group? (I’m not sure exactly how that would best be done using the paramset API, though).

Like @noiserock said, this is a total game changer. Thank you so much!

I just read through the functions you want to implement. They seem cool! What if I add all the library stuff you need to implement more modulators to the package you’d get by require(“toolkit/lib//mod”) and this can be a test case for what it feels like as a library?

I also want to make selecting targets easier, and I’m not sure how. They can be string-entry, but that’s not exactly easier.

Being able to use these as a library would be really cool! I’m working on building a proof of concept within the main mod file now, but would definitely give the library approach a shot.

wow this is tremendous

awesome!! thanks a lot your mod brig a lot of new possibilities in the scripts, lovely!!

Just one thing, I noticed when choosing an LFO target, even if the amount is set to 0 I can hear changes in the sound as I scroll thru destinations as if those parfameters changed, and the worst part: they remain changed. maybe a parameter for LFO on/off could fix that?? Thanks again!